Just got a new PSU a few months ago... could it already be failing?

Middle of December my old PSU died on me, so went to bestbuys (had to have something that day) and picked up a thermal take 650watt. Single 15v rail and had 80+ bronze so I figured it was alright.

I just upgraded my GPU to a r9 390 and I keep getting random cashes. The system doesn't reboot, it just locks up.
The system should have enough power to run... but I'm convinced the PSU is the issue. Am I nuts for thinking a PSU can degrade in just a few months?

Suggestions on a new PSU would also be helpful.

While Thermaltake doesn't make the most fantastic power supplies in the world, they're decent and I kind of doubt it's the issue...

getting random cashes. The system doesn't reboot, it just locks up.

Is you CPU overclocked? maybe it's your cpu that's what this sounds like.

Na' cpu isn't overclocks. Planned on OCing it but never got around to replacing the stock cooler.

The system passed a burn in test, and the GPU made it though furmark 100% loading it for like 15mins.

Have you done any testing on the memory?

What are you doing when it crashes?

Nothing in particular. Has crashed a few times when I was playing counter strike, a few times while watching youtube, has even crashed while idle on the desktop.

The crashes are pretty consistent, what I'm doing during the crashes isn't consistent at all.

Do you have your old gpu still to test with that?

I just upgraded my GPU to a r9 390 and I keep getting random cashes.

What was your previous GPU?

Did you reinstall Windoze when you upgraded, or did you use DDU to clean the system of fur (residual driver files from the previous GPU)? 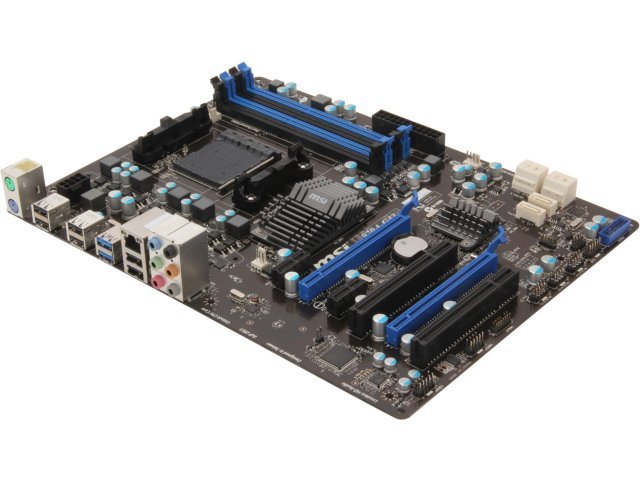 Yeah, it might be possible since devices have the tendency to fail in the first or the last period of their lifetime. But in your case you need to do more testing to your system before giving a proper diagnosis to your problem.

Yeah that particular Msi motherboard is not that great indeed.
It might be verywell the motherboard, allthough it should be capable to handle a FX6300 at stock.

I would personaly firstly try a fresh re-install of windows firstly,
to see if that fixes things.
For the rest he could check if there is any bios update availeble out there.
In the bios he might try to disable C-states.

The Thermal take psu could of course be verywell the issue aswell.
They dont build the most decent units in the world.
But thats hard to say as of first sight.
Needs more testing for that.

I reformatted both my drives. Old gpu was a r7 260x

Wasn't really looking at the CPU temp under load, but the GPU was getting to around 80c after 15mins of furmark. The system didn't crash during any of the burnin tests that I've done... so I don't think heat is the issue.

Okay, just checking. You went the right way on this.

Are you by any chance on Windows 10? I've had instability issues with Windows 10 on my FX-8320 before.

80c after 15mins of furmark

That's not a big deal. 80c should be a safe temp for that card.

Yeah, the temps seemed fine to me also.

And, yeah I'm running windows 10 at the moment. I couldn't find my windows 7 or 8 usbs, so I figured I'd upgrade since I had to make a new boot disk anyways.

I was however having the same problem on windows 8.1

Okay, if you were having the issue on 8.1, it's probably not software related.

Have you updated your BIOS?

There was a release for your motherboard (A6) released in January of this year.

No, I haven't. The system was stable before I upgraded my GPU so never really had the need.

You think it could really be the bios?

Not sure. Just curious, posted the link for completeness. Probably isn't because you were stable before the GPU upgrade.

If you've got another PSU you'd like to try, give it a go. 650w is absolutely enough, but if the PSU is flawed, you could absolutely be seeing stability issues.