Just do it. sword revival edition

hi im fred i buy and restore swords. mostly antiques and mostly swords but other things too. recently “completed” fixing up a old Spanish m1895 Calvary saber made in 1904. going give a brief “how to do thing” showing the tools and methods i used and the before and after. mostly its just going to be pictures with words underneath like in kindergarten. also swords projects are never over. their is always work to be done in the future and the damage im repairing is due to someone just not doing that work. if you buy a antique sword dont be a lazy bum, keep it in as good condition or better then you found it. preserve it and it will outlast your nokia phone you great great grandkids inherit.

while it is hard to see with the flash, the blade is actually darker then the scabbard. someone poured oil over the steel then set it on fire. this creates a long lasting water repellent that is difficult to remove but also imperfect as you will see. this type of protection was popular in the late 1800’s/early 1900’s as a poor&lazy mans way to keep the sword from rusting without spending more then 5 minutes a lifetime. if you zoom in on the scabbard you can see what remains of the chrome plating. im guessing the fire had something to do with it coming off, but also wear and tear over 100+ years. 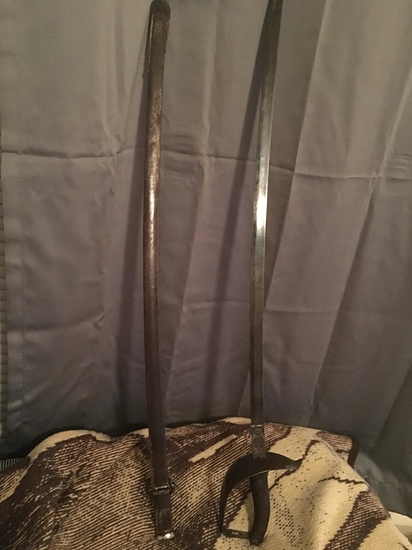 b15FMti.jpg3024×4032 1.13 MB
these marks are not acid etched like most other country’s swords, but rather stamped into the metal while hot. stamps must be done perfectly the first time and if you fail you have to remake the sword. the stamp on the hilt is curved in 2 planes, and they could not have stamped then curved it without deforming the stamp. they had to have made a custom press for this. 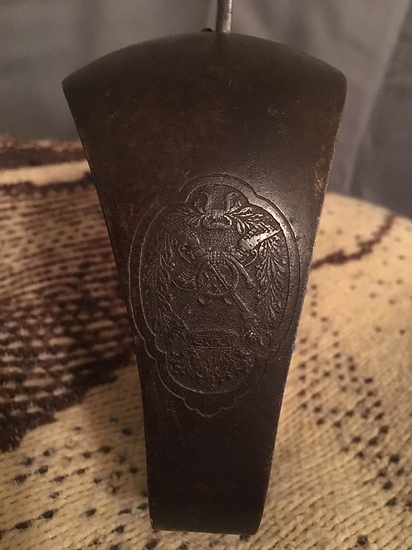 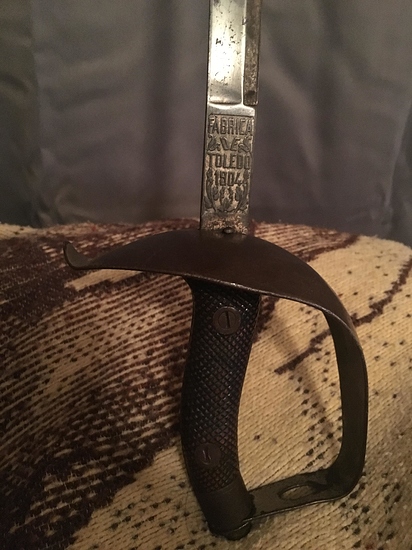 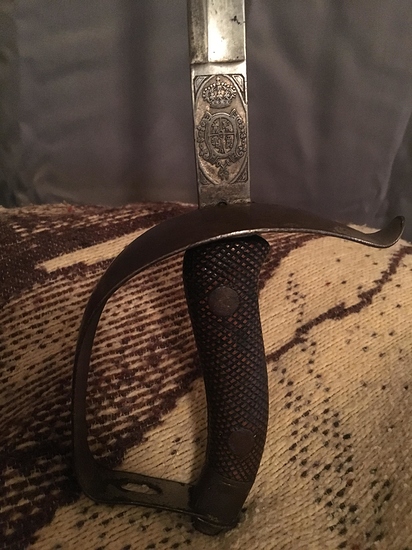 so used the buffer primarily, and on some hard rust spots i spot cleaned with the wire brush wheel enough to loosen the rust then switched back to buffer. afterwords i wiped the whole thing down with a oiled cloth as buffering leaves a lot of compound mixed with grime from the sword on the sword. then spot cleaned with the scub pad and cloth. with the scabbard, so much of the chrome was gone i didnt try to save it. wire brushed the whole thing. i dont want a leopard pattern of steel/chrome and 60-75% of the chrome was already gone. this took about 30 hours. 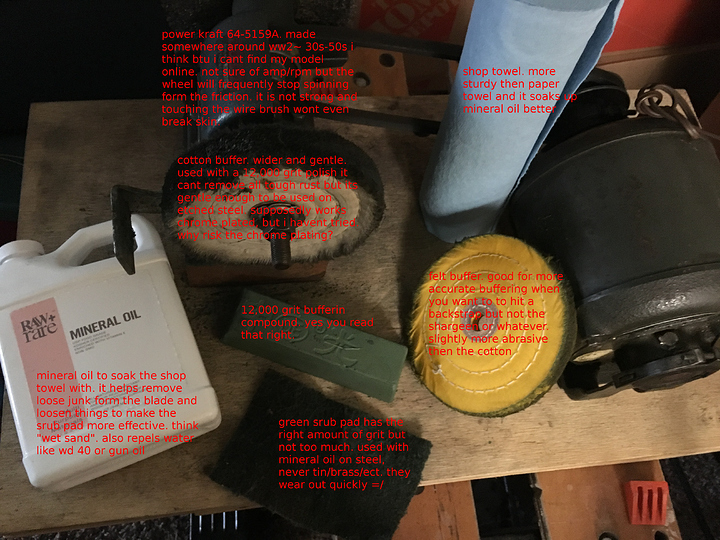 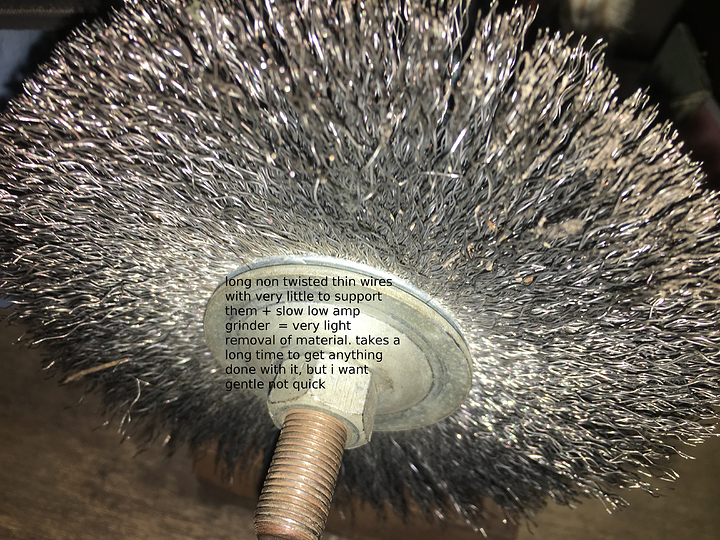 probably not going to use this glorified peg board with this sword, but it works for display and hasnt been mounted yet 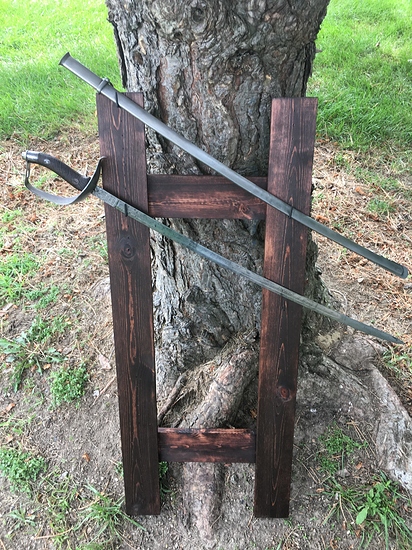 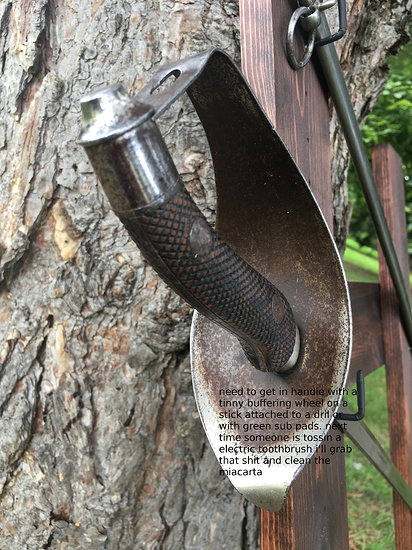 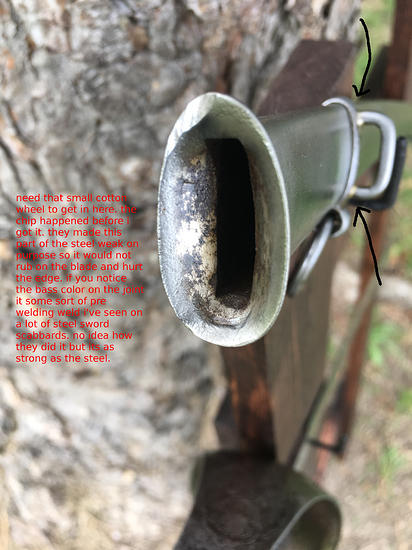 OlToB8c.jpg3024×4032 2.26 MB
at the base of the blade their would normally be a leather oval washer. this serves 2 purposed of helping the blade stay in the scabbard and providing a air tight seal to keep out damp air. the leather would have been treated with a oily product that makes it water repellent, but years of not feeding it = dry fragile leather. it fell off some time before i got the sword. that little nail sticking out was probably added to keep the leather in place in lieu of glue. also left a little chrome on the guard, as it was the only chrome that survived on the guard. 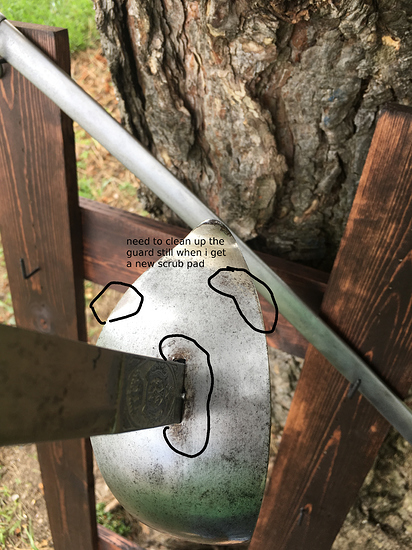 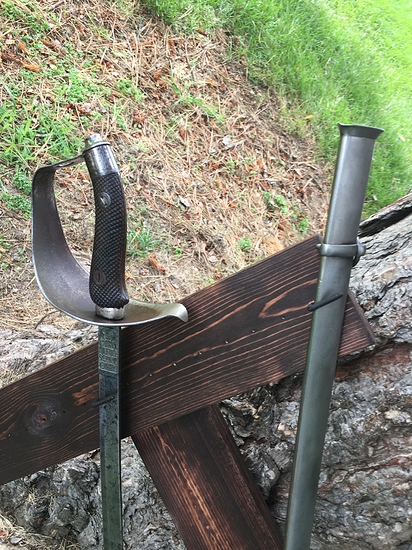 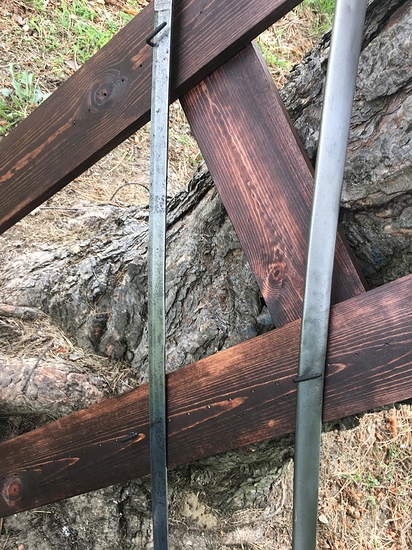 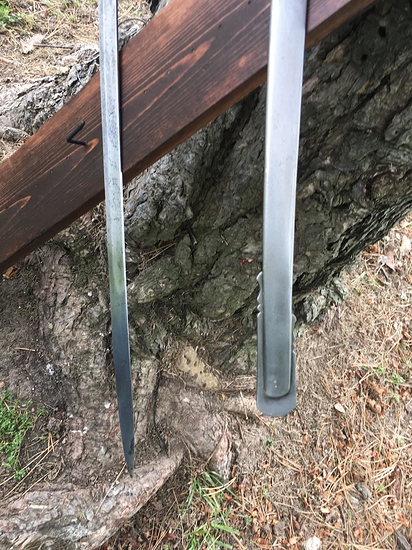 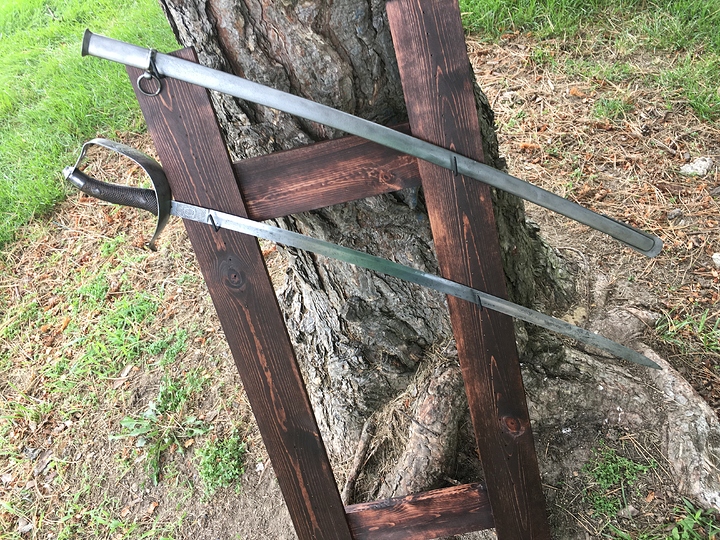 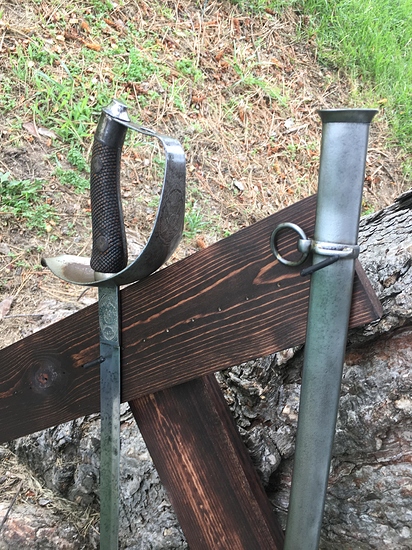 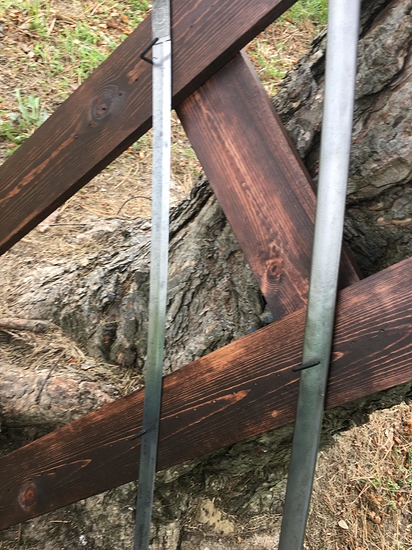 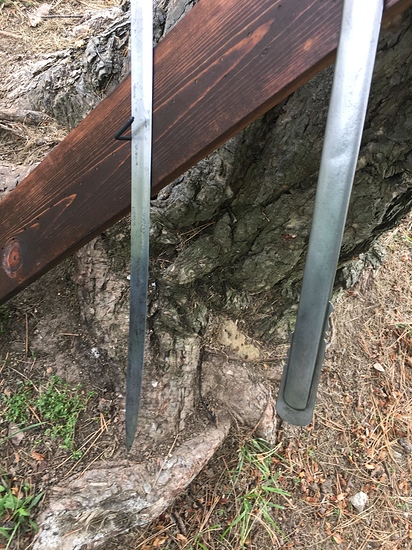 btzzZHp.jpg3024×4032 1.66 MB
with a more aggressive compound and/or more time i could have brought the sword to a brighter new steel mirror finish. i didnt for several reasons, the main one was this pic right here. the darker/lighter pattern here is a intentional feature of the design. they would have painted the stamp then buffered off the top layer leaving this contrasting pattern here. 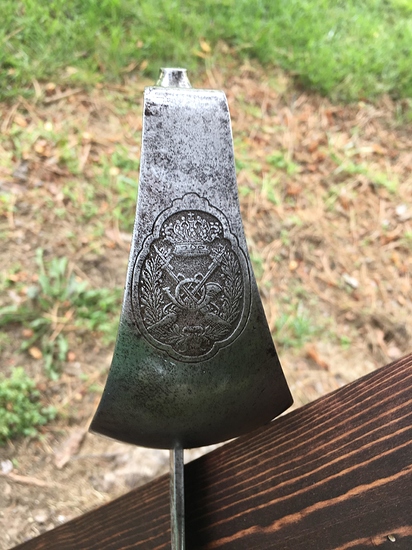 final thoughts
at this point i need to keep it oiled and do some touch up when i get some new tools. the inside on the guard needs a lot of work. if you zoom into the blade especially near the tip you will see pitting. its not the worst in my collection for sure but its there. fully removing those black oxidized spots would bring the blade to a high polish in those spots and remove some patina left on the blade. it would also reveal more pitting under those spots so im leaving the blade how it is. but yea finished this like 2 weeks ago and it showed up in the mail the the 29th of july. took 3 weeks or so in between work and life.

feel free to ask question ama and all that shit.

also here is some example pics from other swords in my collection.
this is a arisaka type 30 bayonet which was also burned oil coated. notice the horrible pitting on the blade. this guy is “in progress” still. 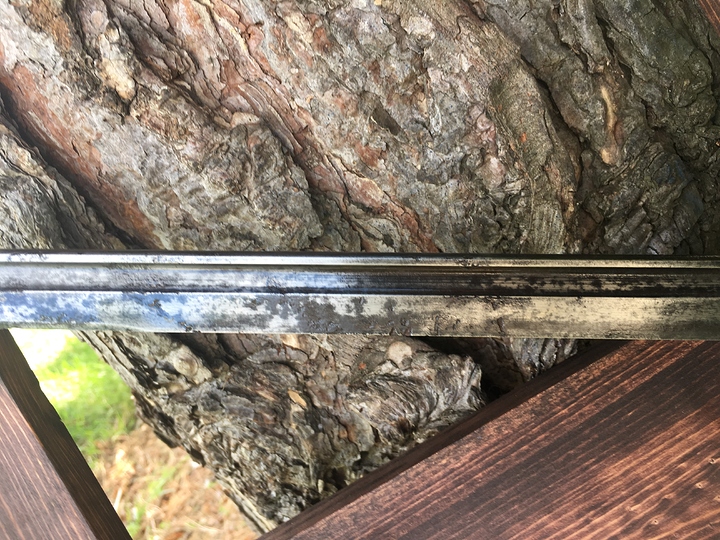 OZwPJ6p.jpg4032×3024 3.1 MB
this is a us 1840 heavy calv which im working on and you can see the before and after a bit better here. on the edge you can actually see steel in some spots, while the fuller is all black and dark red rust. this ones going to take a while as it was left to rust for a very long time. 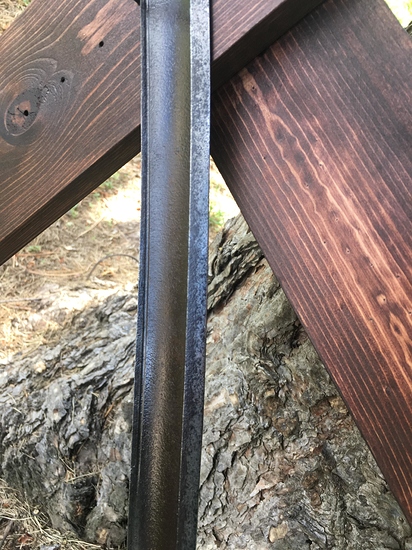