I just purchased an RX 5700 XT Sapphire, it’s making a very annoying ‘clicking’ sound when ever a game is playing is this normal?

I have uploaded a YouTube video of it - Sapphire RX 5700 XT ‘Clicking’ Sound - Unfortunately my mic on my phone doesn’t quite capture how loud the sound actually is, I don’t mind the blower, but the clicking is another matter.

Does the sound change when the fan speed changes?

It doesn’t seem to be tied to the fan as I can hear the blower spin up but it makes a completely different sound your typical blower sound. It was hard to capture but when I zoom in and out in the (oxygen not included) you hear an audible change in the in the clicking noises tone

Unfortunately my house mate is making a bit of noise at the moment, I will try and capture the sound difference. but it seems mind blowing at me at least that a graphics card in this day and age would create such noise.

I was able to capture the following clicking sound whilst scrolling in the view in Oxygen Not Included, Sapphire RX 5700 XT ‘Clicking’ Sound Changes With Scrolling unfortunately the video once again fails to capture how loud the clicking actually is.

But as an aside in my annoyance I suspended the process for Oxygen Not Included, and the sound stopped right away, and yes resumes when I resume the process. so in my mind this eliminates the blower as the culprit as it’s still blowing as before to cool the GPU.

If the sound changes with GPU load you may have really terrible coil whine.

Do you have another game you can try, preferably one that has large FPS swings?

Really high framerates make coil whine more apparent. If you have a game or a loading screen that takes your framerate to 3000fps give it a go and see if the noise changes during those FPS spikes.
Anyway that noise sounds like a fan constantly hitting something. Can you try to stop the fan with your finger for a sec to make sure it’s not the GPU fan?

Well yeah coil whine can be pretty anoying.
But not really much you could do about it unfortunately.
The only thing you could try is contact Sapphire about it,
and make a complain about it of course with the video.
Maybe they let you send the card in for an rma.
And when lucky they might send you a new card.

However coil whine basically is always present kinda.
It´s just that with some cards its more audible then others.

I had this experience with my Sapphire 480. It was their drop-in fans that caused it. I had an absolutely terrible experience getting a replacement fan. Not sure if your issue is the same as mine was.

I can say with quite high certainty that this isn’t a fan related problem, as I can influence the clicking noise and completely stop it by stopping/pausing the process that performing intensive GPU load, which would suggest that the coil whine theory is probably the most likely.

I have also now notice the system in general has become extremely unstable, with a range of different kernel panics, which is frustrating to say the least, I haven’t been able to open the memory dumps yet to confirm whether or not that’s its the Radeon drivers, but my gut feeling at this stage is it is, has anyone else experienced there rigs becoming unstable?

Do you have another GPU to swap out for some testing to see if the noise goes away but more importantly, does the system become stable ?

Stability could be caused by many different factors, memory, power, mobo, etc…

If the GPU is at fault, it could be causing the stability issues and swapping it out to see if this goes away would indicate a failing GPU which I would then submit an RMA Request.

I have a Sapphire RX 5700 XT as well I have not heard any clicking noises.

Ive been on mostly Windows LTSB with the current 19.8.1 and before that only 19.7.3 I believe being stable for gaming and even full screen video.

So is that the stability issue you were referring to, Full Screen Video mode causing the blue screens ?

I have had it blue screen in both full screen an in non full screen applications. But I can almost guarantee it if I use FireFox on Facebook for long enough funnily enough

but I’ve had a BSOD playing Oxygen not Included as well.

I have attached a picture of what I saw, in one example, here it clearly says atikmdag.sys, so I am going to gander that it was indeed the Radeon drivers, 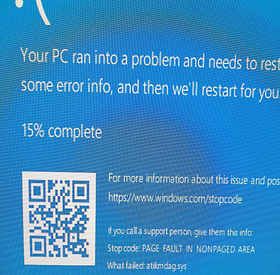 Have you tried this:

Not sure if maybe Windows didn’t have some kind of issue with the driver install or not.

Also are you running both the CPU and Memory in OC mode ?

Just curious if you see this issue when these are both set back to default values, of course for testing purposes