Is my SSD slowing down?

Overall my computer is slowing down a bit. I have my operating system on a 120GB Kingston HyperX 3K and the boot time is a bit slower than it was when i first the built the computer just over 2 years ago and sometimes it takes forever, but that's kinda rare. While surfing the web most the time the first load into a new site will freeze up for a few seconds then finish its loading, most notably on YouTube. I just upgraded my processor about a month or two ago to the AMD 9370 so i dont think it would be a problem with that. Also I don't know if this would have anything to do with but iTunes freezes my computer all the time. I used to play music all the time while playing League of Legends but i stopped because it froze my computer all the time while playing and im certain it is iTunes causing it because its never happened since i have stopped using it and i just tried yesterday to play music, then it froze. iTunes is also installed on my SSD.

So could it be my SSD slowing down? Would you guys recommend i buy a new one and can i even transfer my operating system to a different hard drive?

maybe, try to shuffle the data around and see what happened

When was the last time you cleaned your PC?

Like physically cleaned it? or cleaned out my memory?

Im talking about programs that get rid of unnecessary junk your PC doesn't need. Like CCleaner ect.

Oh ok. Yeah i have CCleaner and use it pretty frequently.

Download AS SSD Benchmark and test. You can install Samsung Magician to benchmark it too. check firmware updates. Reload the OS.

this is what i got with the benchmark 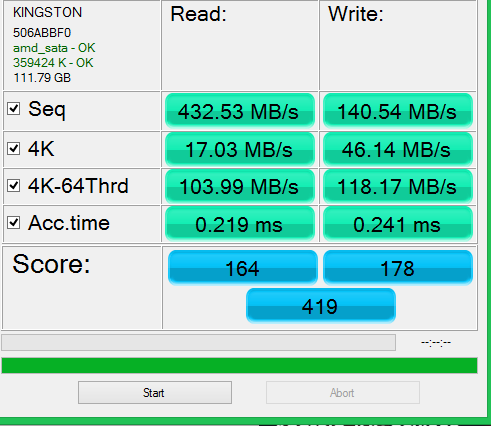 also i did just clean out the computer with CCleaner and it fixed the freeze ups with my web browser.

Your write speeds seem a bit slow compared to advertised specs. I haven't looked to see what real world result have been. Have you checked for firmware upgrades?

SSD's do inherently slow down if you start filling them up. How much space is left on the SSD?