In the picture you will see arrows showing the air flow in my case, and the white circle is the area I will have to mount the h55 radiator. All the case fans are corsair SP 120'S. H100i radiator fans are the fans that came with the H100i. I am also worried of destroying the GPU while Removing the thermal paste. My plan is to just remove the thermal paste off the die and not the edges to prevent myself from accidentally knock one of the resistors like I have before. 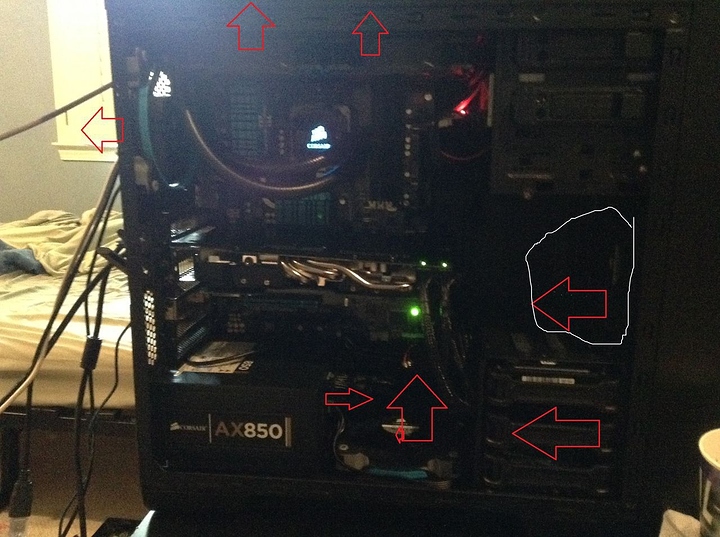 Well, the temperatures are absolutely fine even with your current OC on the GPU. I don't see a reason to add the G10 to your card. Also, the G10 only cools the GPU itself, many other components like the VRM will be way hotter, resulting in a possibly lower life-span. I wouldn't recommend the G10 in general, and especially not in your case.

My ASUS GTX 770 has a heatsink pre - applied VRM heatsink.

I don't know about the exact design of the Direct CU2 cooler from Asus, but I'm pretty sure that you will get rid of that VRM-heatsink by removing the whole thing (which you will have to do in order to slap on the G10). The G10 just has a simple waterblock for the GPU itself and a fan that blows directly on the rest of the components. Many people had concerns about this design and I'm one of them.

Also, what exactly are you trying to achieve with the G10? Sure, it will run a bit cooler, but your temperatures are totally fine. You already have a pretty good overclock on that card, and I doubt that you will be able to go any futher thanks to the restrictions from Nvidia. Is it too loud? I always thought that the Asus designs were pretty quiet.

Okay, but the rest of my arguments still stand. You will not see a real difference with the G10. You already have a high end air cooler on your GPU, "upgrading" to the G10 just doesn't make any sense. If you had problems with temperatures, noise levels or your overclock because you have the standard cooler on there I could maybe understand it. But in your situation? No.

I have a GTX 770 as well, and temps of 70C are fine. I believe you can get to 80C before the GPU starts to slow itself down and up to 98C before it starts getting mad at you.

Well the g10 would look better the Core will be cooler extending its life span and it would look realy cool.

I think that you don't need it, but if you want it, get it.

Temps like that with the overclock are normal, and actually below what I would think they would be. No, it is not worth installing the radiator. But if you want to do it.

Beastasf so, you installed the g10 on your asus gtx 770, or what? also the pcb is compatible with the g10, and i can leave the backplate (the black one that says asus II...) installing the g10?