Is it worth to still GPU mine?

So i recently just upgraded from a Titan V GPU and i was planning on selling it but was convinced out of it due to risk of getting scammed from ebay so im tempted to start mining on it since its doing nothing but sat in my draw. Although im just curious if single GPU mining is even worth it? i figure id be making roughly £4 a day profit so i guess thats something but im not sure if its worth potentially breaking a nice condition Titan V since i dont really see many in the wild and would be a shame to have as a paperweight, whats your thoughts on this? Would you mine or just avoid the risk and keep it in a draw as a backup?

Depends what GPU you have but most likely yes. I’m doing it.

Also, BTC is still on the up (and if you mine the noob way with nice hash you’ll be paid in BTC). My biggest mistake was quitting mining when the price tanked in 2018 - the BTC rewards my rx480 was bringing in from nice hash in 2017 are now worth like $100-200/week in today’s BTC.

If you’re mining some other coin directly for a pool and getting paid for that (in say, ether) the same basic principle applies. Yes, if your GPU is good it is still worth it and the price rise will make what you mine today far more valuable in the future.

its a Titan V, i do also have a Titan Xp i could mine on but honestly not sure if the Xp would be worth it vs the power consumption it take up.

its a Titan V, i do also have a Titan Xp i could mine on but honestly not sure if the Xp would be worth it vs the power consumption it take up.

If its mining ether you can likely tune the card to run around 150w or less. Ether is memory intensive but not GPU compute intensive so much. There’s probably no need to run massive voltage or clocks through it.

oh really? how would i do this? MSI Afterburner?

And Quick Follow up i put the Xp in and due to having this MATX case i was planning on mining in im not too sure the Xp is worth it since it just adds more heat into a small case:

so im thinking to remove the XP and then add some fans below the titan v to help keep it cool, since it would be nice to even make $5-6 a day from this so i can just eat lunch for free everyday or keep saving it for a rainy day since its not doing much sat on myshelf. 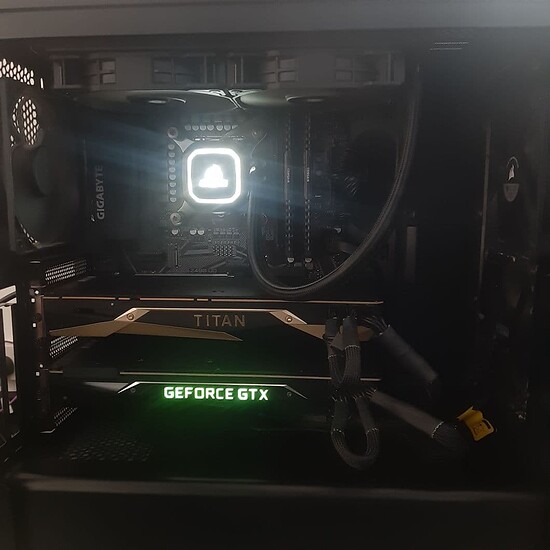 The Titan V may be a better miner, might need to google it.

But in general, google what your card is good at mining. most GPU mining (of ASIC resistant coins) is memory intensive (that’s the ASIC resistant bit). GPU mining is generally only good for “ASIC resistant” stuff, otherwise people will be getting all the profit with ant miners and the like.

edit:
and yeah, afterburner for Nvidia. I just tune in watt man because it works and is included on AMD

edit:
definitely, definitely go with the titan V to mine. It has HBM which will be a massive win for mining performance due to the memory bandwidth vs. the Titan XP.

Will definitely be profitable though. Also that page is quite old so hash rate/power likely better than that in 2021. Checking a few of the other cards mentioned, looks like they aren’t even measuring actual power draw and just listing the rated TDP of the cards. I was mining with Vega 64 in 150w and they list it as 295w

hmm so i limited both the cards to 65 degree C in Afterburner only and running NiceHash since its the only quick and easy tool and i know of and it seems to be getting 10GBP a day whats roughly 13usd i think. whats not bad at all right? the power isnt much of a concern since electricity here is fairly cheap

and looking at nvidia-smi it doesnt seem to be sucking that much power: 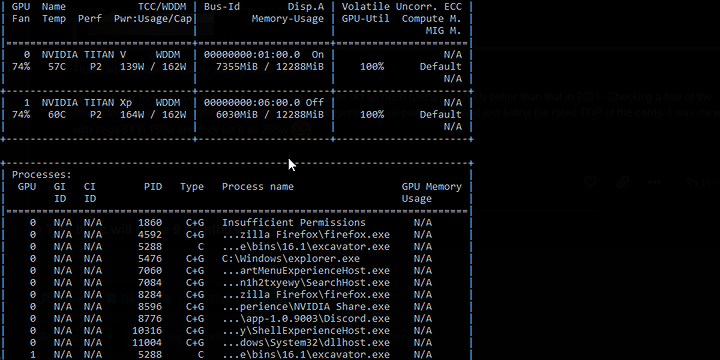 although i may still tweak it and play with it since both cards seem to be staying cool and i may aswell mine on both gpus if i can since its one less card sat on a shelf doing nothing.

13 USD seems about right for mining with both of those cards.

Definitely look into tuning because the cooler and quieter you can keep the cards the less annoying they will be, never mind the power draw benefit as well.

Thanks for all the help!! ive been tweaking all day and currently +150 on the titan v memory and underclocked it to be around 120w and getting 71Mh/s and the titan Xp is currently +400 on the memory and getting around 39Mh/s and they are both at around 55c whats not too bad and its keeping my office nice and toasty but not too loud during these winter nights.