NOTE: For the sake of brevity, skip to TL:DR below. And no, Qain, I don't have time/money to look into building a pfsense box yet, haha. However, I would like to learn how to do that...

Ok, so I'm renting a room at my brother's house, and his wi-fi solution is terrible. We have Cox internet where we SOMETIMES get 50 down and 5 up.... Anyway, I work a night shift, so I usually don't compete with my neighbors for bandwidth. However, I will get wild swings in internet speeds all through the night/early morning (2am through 6am). This is quite annoying because I watch a ton of streamed videos through Twitch or YouTube. Not to mention the range is atrocious with the router/modem thing we have now. However, I have noticed that the range is not what is affecting the speeds. I could be right next to the router, and the speeds will sometimes slowly deteriorate to 0.25 down and 0.5 up. The wireless will sometime just crash altogether. Not acceptable.
I have considered just turning off all wi-fi capabilities to the damn thing, using it as a modem, and buying a better router. I've seen that suggested on other forums, and that might fix it. Suggestions for a good affordable router, anyone? Or is there something I'm missing here?

TLDR: Connection speed, 50 down 5 up. Speeds are never consistent and wireless goes down occasionally. Sometimes down to 0.25 down 0.5 up. We have a wi-fi/modem combo box. Think I might just bridge the modem to a different wireless router. Thoughts?

This is the modem and wi-fi combo that we have 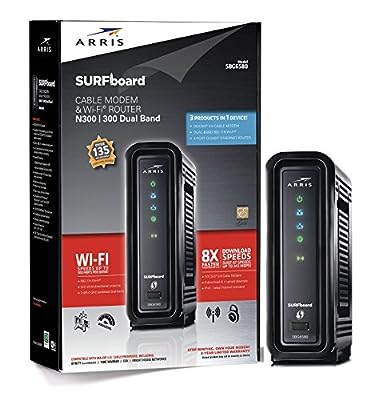 Any help is appreciated! Also, I feel like this topic might have been discussed (apologies for beating the metaphorical dead horse), but I couldn't find much on this forum. However, I'll delete this if I find another thread that solves my problem. Thanks guys!

@Dje4321, Will do, I'll update with results tomorrow when I've got time to test the speeds over a longer period of time.