Interfacing my lost AMazon fire TV with a new panel?

Well a few months ago my ex girlfriend got really really drunk and smashed my tv then ran off and tried to have a threeway with two african american gentlemen who rejected her. Well due to deep-seated abandonment issues I very much miss them both even though only one of them was useful for anything. This is my quest to get my TV back sort of.

I intend to interface the gubbens from my old tv into a new tv or get ahold of a panel. I purchased a random new TV that was also 4k and 65 inch and pulled the back off to see if I could just plug the computer into it, no dice because they had different LVDS cables. I happen to pull the back off a smaller tv that oddly enough had an adapter cable that matched the connector on the new TV’s t-con board and the and the old tv’s main board. naturally I tired the main board on both panels that work and it almost worked but not quite, both of the working panels are ONV branded and behave in the exact same way pictured below, the original was a InnoLux panel.

I expect if i can get ahold of a TV that contains a comparable InnoLux panel there is a very good chance it will be a plug and play swap and ide be willing to make that gamle.

So does anyone know what TV bands use InnoLux panels? I am fairly certain element probably still dose but I don’t know for sure.

Or if anyone happens know know where i can purchase a single InnoLux V650DJ4-QS5 Rev T1 panel or one that is should function as a drop in replacement for it it or just knows how to get my existing things to interface correctly that would also be useful. 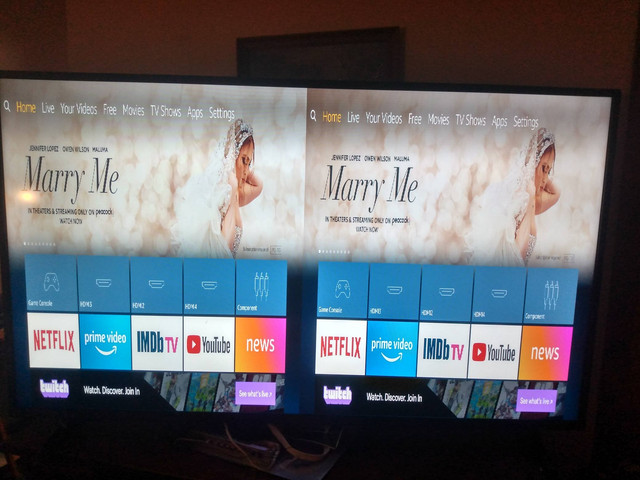 You are [email protected] lucky that panel actually worked and didn’t destroy your TV, or the TV destroying the panel, or both. Plugging in cables willy-nilly just because they fit and look-a-like is a recipe for disaster. Unless you know exactly which pins actually carry what signal and if that’s the same on both sides, you must assume they’re incompatible.

As for your ex-gf, I’m not interested in her exploits, so you may just leave that out of the narrative.

You will need a driver board that can do that. Ideally another of the same that came out.

I actually have an electronics background although not a display expert pinout was identical so it was unlikely to fry it modern Tv’s are pretty modular. The two ONV panels where manufactured at very different times the smaller one is from around the same time as my old tv (2017) All LCD panels like these are kind of mirrored on each side electrically that’s why if your t-con board messes up sometimes only half your display will show up, these two different brands of panels expect a different kind of signal though so that t-con board is getting confused and doing that mirroring thing.

I do believe it will work if i can manage to get a InnoLux panel that I believe is my best bet for success.

Interestingly enough the smaller TV is also an amazon fire tv, the mainboards are nearly identical hardware wise and can work correctly on the new display.

Note to Mr Master: I an none too concerned with that fact your dislike my anecdotes because you gave the kinda response my mother would and therefore are unlikely to be useful.

Oh interesting, I read on one of the spec sheets it is 3D and 120hz capable. I wonder if that’s causing the side by side.

It gets confused and puts 2x 60hz pictures side by side for some reason.

This is total guess work. But are you able to screw around with any OSD or options at all?

I was looking at this:

Well a few months ago my ex girlfriend got really really drunk and smashed my tv then ran off and tried to have a threeway with two african american gentlemen who rejected her. Well due to deep-seated abandonment issues I very much miss them both even though only one of them was useful for anything. This is my quest to getting my TV back sort of.

That has to be the best/worst intro to a thread I have ever seen.

I hope you get things worked out dude on both fronts.

I think you might be onto something there all the panels are capable of a higher refresh rate than 60hz and i know for a fact the fire menu is 60hz but the other two panels are not 3d capable. it would make sense that the 3d panels expect a different signal and the resulting segnel may look something like that on a 2d panel. I will investigate this thought when I have some free time.

well I was hoping to find something like a jumper on the main board where i could maybe just switch it but no dice there, it maybe be possible to change the video driver in android after obtaining root access but I’m not sure how to go about that if that would even work, probably something you would have to program through Jtag. I might poke around a little down that route but it seems like my best bet is to obtain a comparable 3d panel.

I have had little luck trying to purchase just the panel of this size as singles none of the sellers of such things seems to want to accommodate a consumer, understandable really considering 90 percent of the people trying to change them out would break the new one and try to send it back and get there money…

I will just purchase a 3d capable tv with matching specs and see what I can do there I think that will work out.

From this experience i have learned if you have a panel capable of a high refresh rate and wanted to do something like rollout your own custom monitor with a giant screen it should be possible to mix and match mainboards from smaller monitor displays a little more capable than the ones used in the average TV if you’re so inclined to take the risk of trying. obviously you would have to make sure you have enough current to drive the larger panel for starters…Maybe put those korean monitors to shame.

edit: it seems 3d is no longer in vogue and finding a television finding a display with that feature is challenging.