It was all looking impressive to me. Then I read the TDP 400W server CPU !! No price listed.

Intel will release crazy products to seem competitive. I dont know the Rome TDP but in sure is something that works in a server rack.

That said 400w TDP is not unreasonable for that many cores. Pretty sure EPYC 2 will be up near 300 or more (e.g., 4x 65w dies, or anywhere up to 4x95w depending on how hard they push) at some point depending very much on what happens with clock speed.

Its 2 of their 28 core cpus glued together (yea remember that 28 core at 5GHz). I think, either the clocks are going to be so bad that it wouldn’t be able to compete with AMD in IPC, or it will be un-coolable. And I am sure the price is going to be spectacular.

Hopefully AdoredTV will make a video about it. 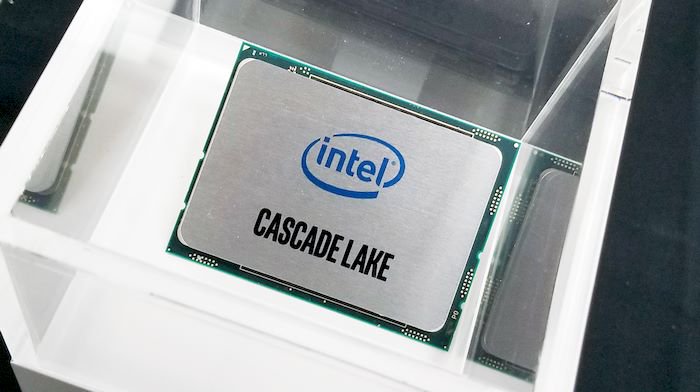 Do you remember FX9590?
8 cores, 5GHz… It looked impressive on paper…
It’s basically that in Intel form…

Its 2 of their 28 core cpus glued together (yea remember that 28 core at 5GHz). I think, either the clocks are going to be so bad that it wouldn’t be able to compete with AMD in IPC, or it will be un-coolable.

But you can be damn sure it will be clocked around 2Ghz (or maybe even 1.8) in this form, guaranteed. Not 5Ghz, no way. Not even 3 Ghz. Probably well under 2.4.

For server high core count stuff, somewhere around 2Ghz seems to be the norm. Purely due to thermal and power draw constraints.

edit:
High core count EPYC 2… my above post has a mistake. I forgot EPYC 2 will be 8 dies plus the IO. So to get under 300w, those 8 dies will need to be in the 30-35 watt range each. Not 65w. You’re talking highly binned better-than-mobile-spec dies.

And that, kids is why server clocks with high core count parts are so low vs. desktop. There’s no magic going on with regards to how they put so many cores in a package (whether it is AMD or intel or anyone else). It’s basic physics of voltage vs. clock speed with the very best dies they can produce.

As an aside, EPYC 2 coming out before Ryzen is IMHO an indication that AMD and TSMC are very confident with their 7nm process tech. Ditto for the fact that they got Vega 20 out on 7nm so early. Vega 20 is a high transistor count part.

On the flipside intel is struggling to get gpu-free dual core laptop parts out on 10 nm.

Intel was not so sure, so they made a watercooled server chassis: 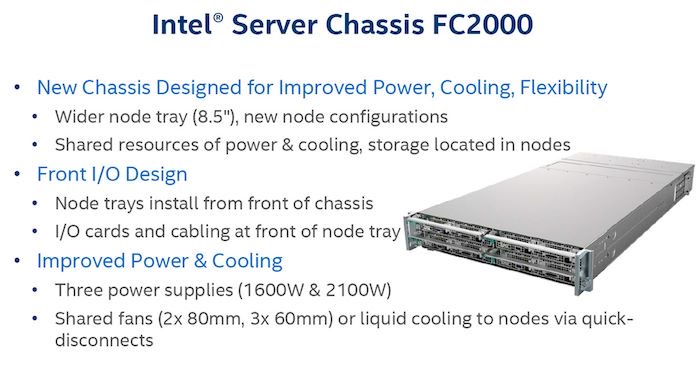 You may ask: Why watercool a server?
Simple answer: 400W Intel TDP, that is like having two FX-9350s running full tilt. 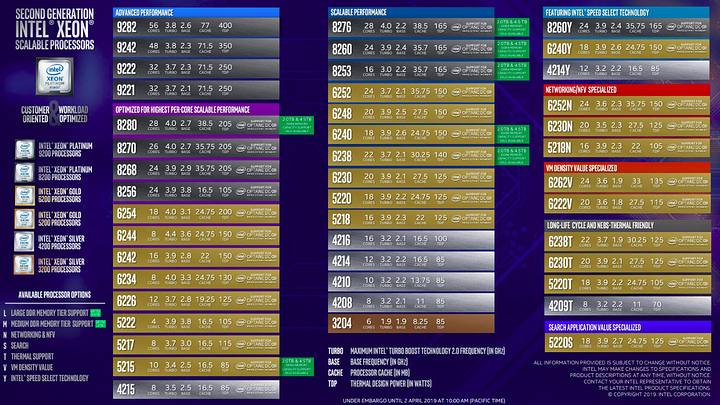 Intel was not so sure, so they made a watercooled server chassis

I suspect thats more about adequate cooling in what looks to be a 1-2U form factor.

300-400w processor in that form factor with server grade reliability would definitely be a challenge.