So, this was unexpectedly low pricing:

Looks like intel is feeling the squeeze from AMD - in non desktop Xeon form this is an 8180 with RRP about 10-13k USD?

Intel perhaps taking a loss on this one to claim the desktop crown (on paper, briefly - given they’re rumoured to make only 1500 of them) before they get their ass handed to them by threadripper 3?

Rumor are the retail CPU being $4k and Asus not going retail. Gigabyte still tight lipped on any pricing.

i doubt this thing will sell retail at all.

i doubt it will sell in any volume at all. it’s a paper launch just like the old 1Ghz pentium 3.

Lol just looking at the benchmarks, it isn’t even winning most of them vs. TR2 or existing intel HEDT.

A 2990WX is faster in blender BMW benchmark for example. for ~1/2 the price. And cheaper board. And more lanes…

Steve left out the 2950X which shows when the Windows kernel is regressing. The only benchmark that put the 2990WX in bad shape was the first one. Premiere Pro 2019 which has the window kernel regression.

And games which the W-3175X has down it seems. New F1 best chip. Pity we didn’t get an Ashes of the Benchmark run

i doubt this thing will sell at all.

Fixed that for you.

I do joke but not too much, who actually wants this? It still is not 5ghz, its was not out in time like it was supposed to, the mother boards are just silly in price, size and anything else (they currently only fit in one desktop case).

This is just not a viable part that I can see, though happy to see someone find a legit use for one, I just expect it to also be filled readily and far more sensibly by the ThreadRipper platform.

Now, how does windows handle all those threads…

Rumor are the retail CPU being $4k and Asus not going retail. Gigabyte still tight lipped on any pricing.

For this product, Intel is actually providing an RCP or ‘recommended consumer price’ of $2999, rather than a tray price.

As per the article…

I know that will never actually come to pass but that is the actual price according to Intel. Not the system integrator price.

This is also a thing:

It is worth noting that this processor is rated at 3.1 GHz for 255W TDP, so trying to push 4.5 GHz across all cores will start to draw some serious power. This is why the ASUS motherboard has 32 phases, and we were provided with a 1600W power supply with our review sample.

If that what the base system needed to run once you load it up with drives cards and anything else that will go in it with be pushing some serious wattage.

I remember there being a PSU at CES? That was intended for mining but would, or could, only be sold in Europe because the electrical system in the US could not converted that much jam out of a 110v socket and needed our 230v. I wonder if that will be a limitation on these systems, having to run multiple PSUs just to keep it fed, and not small ones either… 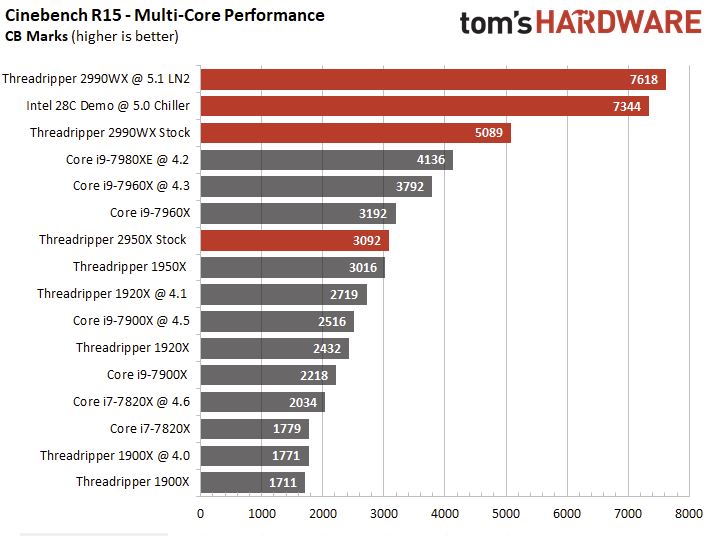 Right there with you, I am just spinning idea and what I read.

I’ll have to read it to comment…Im getting drunk.

Not much to read in the PCPer article other than, its here, fast and probably good for content creators who will suck up the price. No actual testing of if it is good or not they just assume it is the best by default. Hmmmm.

Edit: lol when I saw the water cooler in the OPs article I though it was a hack together job… Nope that’s an official asetek cooler. A regular anemic pump block combo with a piece if copper slapped on the bottom to try and gather more heat.

I would give them a sarcastic gold star but that barely even an attempt. In light of the 1Hp industrial water chiller used for the OC demo this this is just pissing into the wind.

You realize with all the intel defectors. PC-Per do not have a CPU or MB. There copy and paste other sites like I didnt read it first.

Yeah, I know, odd that their buddies would not look out for the place that made them. I am projecting for sure.

No friends in business without benefits.

I do joke but not too much, who actually wants this?

What a time to be alive a data center

Outside of some really niche use cases like rendering rigs and homelab virtualization stuff I dont really know. Does it need a reason to exist though?

who actually wants this?

Who wants the best consumer cpu that can be had?

A lot of people.

If you can believe the articles, Intel does not know either. Rumour is that there will only be 1500 of these made.

DataCenters have to think about density and power.
This thing does neither beeing single socket and extreme powerdraw.

Well it was mostly a joke so…

This CPU only wins benchmarks (and seemingly all reviewers).

It is a pointless product at a price that likely looses Intel money, needs upwards of 250W cooling capacity yet does not support server-class features (at least the two motherboards do not).

Outside of some really niche use cases like rendering rigs and homelab virtualization stuff I dont really know.

For rendering, the 2990WX is faster at way less than half the total system BOM cost. For VM, AMD already offer more cores for less money at similar clocks.

Who wants the best consumer cpu that can be had?

Sure, multitasking, blahblah… but super niche. And I’d wager that threadripper 3 will tear this thing a new asshole in about 3-6 months - given it’s losing in a lot of stuff to even threadripper 2.

This CPU only wins benchmarks (and seemingly all reviewers).

Reading through the anandtech review, it looks like it loses more benchmarks than it wins (though i didn’t do a proper count, just remember seeing a lot of losses to much cheaper parts)?

Pay attention to “less is better” vs. “more is better” for each benchmark…