Apparently, Haswell-E is coming in the second half of 2014 on the X99 chipset and will support DDR4 memory. 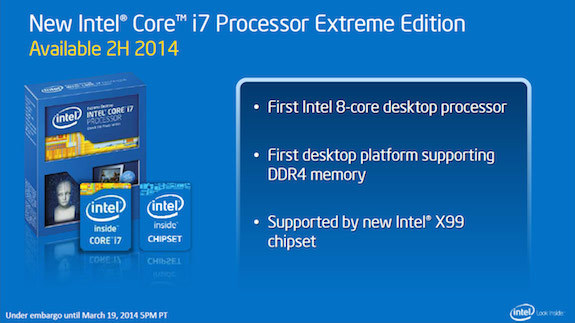 Tom's hardware. They also mentioned a "Pentium anniversary edition" or some such that would have an unlocked multiplier.

i saw it on digital storm and anandtech http://www.anandtech.com/show/7874/haswelle-8-cores-x99-ddr4

I'm betting the 8-core cpu will only be their "extreme" processor and will price around $1000. Still good to see a new platform though, if their mid-range cpu is an 8-core I will probably upgrade to this.

Most likely it would only be the 5960x(?), which would have 8 cores, and then skylake will introduce the 6930k(?) which also should have 8 cores for a more reasonable price.(Don't really know, it is all guessing haven't been reading up on it)

im just wondering when we will see DDR4 in the wild. X99 is set to come out this year, which supports DDR4, but that doesn't mean DDR4 will be out at the mobo/CPU launch, right?

Awesome, I wasn't expecting 8 cores until skylake, which is probably around 2 years or so away, so this is a nice surprise.

Engadget is reporting that the 8-core will be the Extreme edition cpu:

so I'm guessing the 8 cores will be limited to just the X edition i7 and run around $1200. Would be sweet to have a 16 thread cpu though.

Also, I guess they are releasing "devil's canyon" 4th-gen cpus for overclockers.

I believe it lacks sata-express, haswell is what <5% better clock-clock than it's predecessor, substantially larger ram capacities that DDR4 promises will (I believe) not be available upon initial release and prices of DDR4 will be much more expensive, while the extra speed they provide will probably make little real difference.

Unless this is your workstation, and you need such a powerfull machine because it is how you make money I don't think it will be worth it. You have to wait for skylake(?) 2015 for mainstream DDR4, by then I expect an AMD  CPU refresh of some kind with a new socket (although this is speculation, and not part of their official roadmap). I would also expect them to both have sata-express by that stage.

Haswell actually have the possibility to get stronger.

The thing is, for haswell to truly show is strength, developers would need to code carefully for it.

well coded for haswell, could mean 30-60% performance increase over IV, with some peaks above 100%

What are you talking about some of their proprietry(?) instruction-sets that utilize the IGP... in the case of raw processing power then I imagine it would be beaten by an amd APU..... Proprietry instruction sets are not good in the consumer market, different where you build a specific special machine to do a special thing, but requiring consumers have certain brands of hardware to run your software code is not a good idea....

How would you know it would run better on a AMD IGP?

It is perfectly fine on the consumer market, AMD will adopt certain ISAs, and most of them will mostlikely be supported by the compiler by default so you wont need to hardcode for it.

Something like that. I just read it on an AMD product map or something not too long ago.

Skylake will probably give mainstream users 6 cores hopefully in 2015.