It's kinda like a raspberry pi, but it uses an x86 cpu instead of an ARM cpu. It's also smaller, low power and has some features that make it work well in applications that require small, portable battery-powered applications that benefit from built-in wifi and bluetooth 4.0.


We're going to take a look at setting a full Linux stack with Yocto Linux and doing some fun stuff with this platform in the future.


In Part 1, we're going to take a look at the platform. Part 2, where we actually add a LiPo battery and do a project with Edison, is going to be posted on our Linux Channel tomorrow: http://www.youtube.com/teklinux


This is a companion discussion topic for the original entry at https://teksyndicate.com/videos/intel-edison-tiny-x86-dual-core-atom-computer-makers
3 Likes
Schwarz_Wolf June 17, 2015, 3:47am #2

I'm definitely looking forward to the video on your Intel Edison-based project Wendell, especially with the little glimpse that we had at the end of this video :) 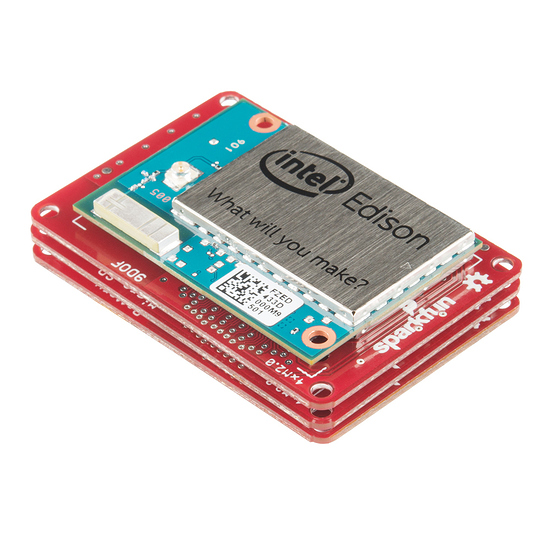 I had an old bet with my boss where I told him I could make a coffee maker that could host a more reliable vpn than our sonicwalls can.

Maybe I should do that now.

I have a project in mind, but I'm wondering if this is capable at all to output any video?

Hey @wendell in the past you have mentioned that you have created an automated server (the WendellBot/ WendellTron?) that searches the web for things you have programmed into it as being 'of interest' - would the Edison be powerful enough to implement something of that nature utilizing its wifi capability and offloading any files to an external sata hdd or similarly offloading to network storage via its wifi or a network adapter?

i got into small form factor builds because of how i wanted a media centre for my living room. eventually i settled on solidrun's microsom quadcore and a carrier board.

while the edison is much more versatile than a pi, the bigger carrier boards reminded me that this chip could be use to run xbmc,

i personally think that apu's would be awesome for these types of applications, especially for 4k and h265. since they made a big deal with carrizo showing the potential for those chips. how ever i have yet to see one that is in a similar form factor.

it would be interesting if this was powerful enough to do the same, which maintaining a similar form factor or slightly larger to a pi.

i'd be interested to see how well it performs or if it is even possible to make this a stream box. i'd send you the great lord wendell cookies from australia if you make a delicious video about this :)

The only question is what do I make?... Any ideas?

home automation, or remote camera with motors to support changing the view. although the os for such a thing while available may not be secure. why not try making something fun like a solar powered weather station with sensors to tell you if its great to go out and play or dry your clothes or turn off sprinklers if there if rain incoming.

I think so -- you'd want a nas that can handle torrent files. Probably a wired-in raspberry pi 2 would be better for that task, though.
If you need portability and the lipo circuit, edison is great.

You wouldn't even need Edison to do that.

Hmm, looks interesting, find a way to get a monitor hooked up to it

This is pretty amazing!
Its like an enhanced cyrpto keychain.
Perhaps add a basic LCD screen like a calculator screen to display certain things?

If one can easily integrate this into their day to day practises, then this would be worth every penny of funding.

If extended functinality included more than just bitcoin, incorporating two factor authentication for support services that would also be amazing.

I think you should take this a bit further and see if you can get it funded properly.
If anything it gets people and makers interested in security.

I really want one but I feel it may suffer the same fate as my Ardunio Uno: sitting on my desk with pulsing lights/sound that I no longer remember why.......

@wendell what web UI is that? Is that part of the Linux distro you were using?

Something I was told today but haven't looked into, was that if the edison has Bluetooth 4.0 le you might be able to use that as part of two factor authentication with other devices.

confirmed, but I had a lot of trouble with the bluetooth stack on yocto. The audio device stuff was flaky as hell until I recompiled everything

@wendell what is that tiny ssh server you're talking about? it sounded really interesting!

@wendell What about The encrypted file system using some sort of Open Time Pass code from for example a Yubikey that you have to plug into the Edison on boot.
I think I'm going to start work on a device like this one and try to get this feature working.

I think there is a great deal of potential for something like this. I'm currently studying Computer Science at the University of Technology in Queensland (Australia) and recently completed a unit in design. I thought I'd share your video in the unit's Facebook group, in case someone just happen to have an idea, they could contact you.

Nice review of some juicy stuff. Congrats.
@Wendell If this is a hardware for being some kind of encryption key detached from the fisical device ("one vault of keys") would't be important consider better encryption?
I heard that SSH was some kind compromised by "NSA research" thing... I recently hear of some new algorithms for encryption that are being developed (in particular came to my attention NORX - link).
Are they alternatives?