"You want a war! I'll give you a war!" or so we imagine Intel thinking behind the scenes as AMD Ryzen processors get low price annoucments today. Intel's 7th generation Kaby Lake CPUs have dropped a bit in price thanks to a coupon code that now works on them at the Walmart aquired Jet.com. There you'll find Kaby Lake as cheap or cheaper, in some cases, than Skylake. The good discounts extend to the GeForce 1080 and 1070 series GPUs, who also can take advantage of the code. Prices are now about what they were during the holiday season.

While the deals below on the Kaby Lake processors are for the consumer grade chips, we suspect you'll soon find bigger price cut on the 8 Core lineups such as the Core i7-6900K (something that was pointely compared to against the Ryzen 7 1800X for half the price. If you're not in a hurry, wait for the lower-end Ryzen 7 1700 to arrive fully as it'll definitely put a spin on the current Kaby Lake lineup.

In the PC gaming world we're seeing discounts galore on recent releases. Today's Northgard released on Steam for $20 as an Early Access strategy title, now down to $16 at GMG after instant discount. Other big name titles are also on sale there like Halo Wars 2, Beserk and the Band of Hawk, and Fairy Fencer F: Advent Dark Force.

This is a companion discussion topic for the original entry at https://level1techs.com/article/intel-cpu-prices-are-lowerin-amd-ryzen
8 Likes
DerKrieger February 23, 2017, 12:23am #2

Mirco Center still has their in store only deals as well.

I knew this would happen. Now it's a question of how low can they go?

@DerKrieger I miss living in Cincinnati for only a very few reasons.
Microcenter is one of those reasons.

The price war has begun.

Frankly I think that's about the most of what we're going to see from the Ryzen release. A lot of people seem to be creaming themselves over the idea that Intel has been intentionally holding performance increases back to mediocre levels, and that this will somehow release a tidal wave of Intel CPUs that are well above and beyond what Intel has now. But I have yet to see posts that have considered the idea that performance increases may be genuinely hard to come by at this point.

I've been paying attention to GPU prices as well... something is coming. And all the youtube reviewers keep dropping hints...

Looking at the big picture, I wouldn't buy Intel even with these prices. We've seen how much Intel is willing to inflate their prices when there's no competition. Buying Intel instead of AMD would hurt the only competitor on the market who's actually responsible for these price cuts. Without AMD, without the success of Ryzen those inflated prices would be back where they were.

And this is why we need competition!

The price war has begun.

Frankly I think that's about the most of what we're going to see from the Ryzen release. A lot of people seem to be creaming themselves over the idea that Intel has been intentionally holding performance increases back to mediocre levels, and that this will somehow release a tidal wave of Intel CPUs that are well above and beyond what Intel has now. But I have yet to see posts that have considered the idea that performance increases may be genuinely hard to come by at this point.

It could also be that Intel rested on their laurels and didn't invest into R&D as much as it could've while AMD stole the plans and blew up the Death Star.

But beware, the Empire will strike back.

Ryzen from your grave!

Do tags only work in the OP?

I don't think Intel would do it but you never know, Intel will not like losing Market Share.

It would be nice, but doubtful Intel will lose much in the way of market share. Right now AMD is ramping up to be competitive with Intel. Back in the days of the Pentium 4 when AMD processors were curb stomping Intel processors, AMD still couldn't pull ahead.

They were ahead briefly. Too be fair Intel was bribing PC makers not to use AMD chips...

Enthusiasts are not where volume sales are. OEMs and businesses. Ryzen is really just a dry run for Naples and if Naples = Ryzen but even more cores, sign me up. If the 1800x plus ecc memory is at least as stable as a non oc 8350 and ecc memory then I am going to be upgrading my home media box to be able to run more VMs like asap.

Business customers are probably more interested in the r5/r3. And the non k parts from Intel are already pretty cheap there. OEM prices for big OEMs are even cheaper than advertised.

AMD wants to do like they did with the rx480 -- sell a ton of middle of the road/upper middle of the road. And they probably will but with OEMs and businesses customers there will be a year of lag to switch gears I fear.

I really don't see why Intel would slash their prices. From an optics standpoint, that just Makes it look like they are conceding defeat and/or devaluing their offering. Intel may discount- but slash? I'll believe it when I see it.

I live in Europe, and here Intel prices still hasn't change! I was aiming to buy the AMD R5 1600X (not launched yet) or R7 1700 but the prices of the late are high for a gaming PC. So I look for a basic Intel option in the meanwhile (like i3-6100), but the prices of intel cpus aren't moving here.
This is for coupling with one 1080p monitor and a rx480 8gb.
I noted that I saw reviews putting the i7 Kaby lake Intel cpu in front of r7 1700 in games (single threaded mostly nowadays) and is more cheap, so...
What is the least bad choice? 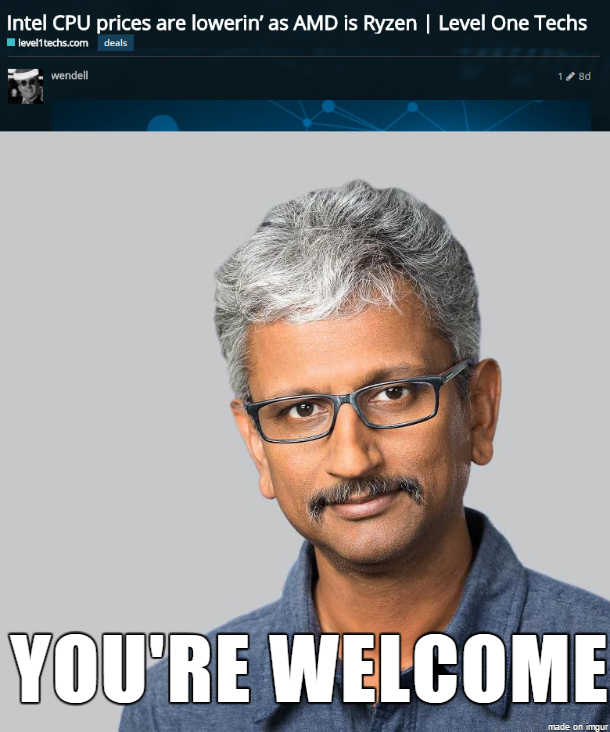 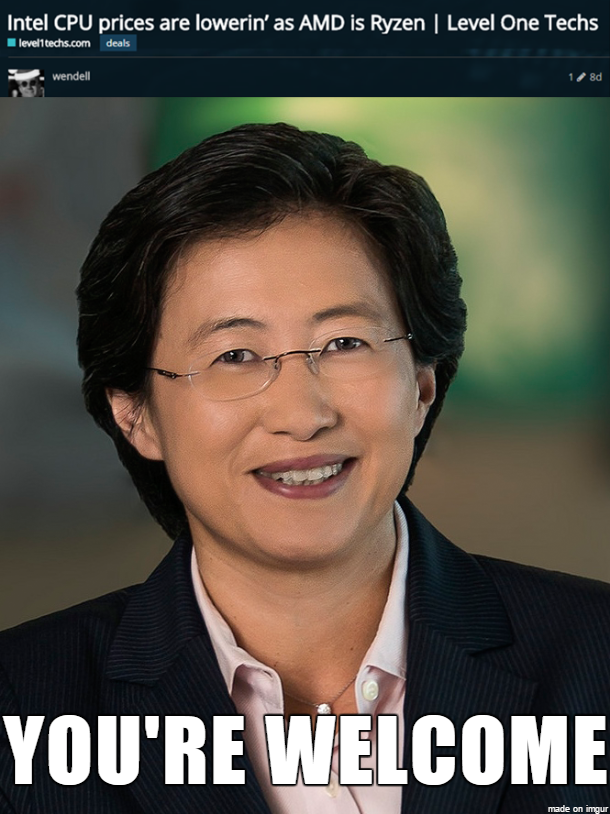 Since Lisa Su is in charge of CPU department, and Raja Koduri is on GPU side.

Hoping to see price drops on X99 cpu´s aswell uphere.
But i suppose that wont happen.