In this thread news and discussion on Intels 10nm node will take place.

First up is Cannon lake which has seen its first part quitely launched in the form of the i3 8121U which is a 15W 2C/4T CPU clocked at 2.2GHz base(3.1 turbo) without any integrated graphics

Cannon lake is Intel first architecture on 10nm and is supposed to have the next generation graphics so it’s curious to see it launch without any iGPU.
Intel recently announced that 10nm mass production is delayed to 2019 and at the same time revealed that we will see another product launch on 14nm this year codenamed whiskey lake.
It is possible that cannon lake will be limited to very few products due to the simple fact that the 14nm+/++ process has better preformance.

A post was split to a new topic: Intel Z390 Chipset News/Discussion

Cannon lake is Intel first architecture on 10nm and is supposed to have the next generation graphics so it’s curious to see it launch without any iGPU.

Do we know that this i3 is actually 10nm? Based on intel’s fab issues, I’m a bit skeptical of this chip actually being 10nm.

Gahhhh, now we’re back to 2 core mobile “core” CPUs? I hoped that was finally behind us.

Not sure how I feel about removing the iGPU. On one hand it takes up a ton of die space, I don’t care about it on desktop, and adding Vega GPUs on the same substrate offers really exciting performance. On the other hand, those Vega GPUs are extremely expensive with HBM2 and everything, so where does that leave the low-end?

Yes we do know that, it’s not simple for Intel to backport Cannon lake to the 14nm node as their micro architectures is tightly integrated with the nodes they are being manufactured on.

ARK page now has the chip listed, 10nm confirmed.
Now if someone would compare the 8121U to the 8130U we can get a comparison between kaby lake and Cannon lake.
Cannon lake adds support for LPDDR4/x.

I believe this is a trial run.

As i understand it, intel has 10nm working, but it just doesn’t beat 14nm++ at the moment, which is cheaper and easier to make (and thus, is pointless).

Looks like AVX512 support will be standard on Cannon Lake.

Latest updated on 10nm+ which will first debute with Ice lake.
Intel has Ice lake SP set for Q2 2020 in their current roadmap. 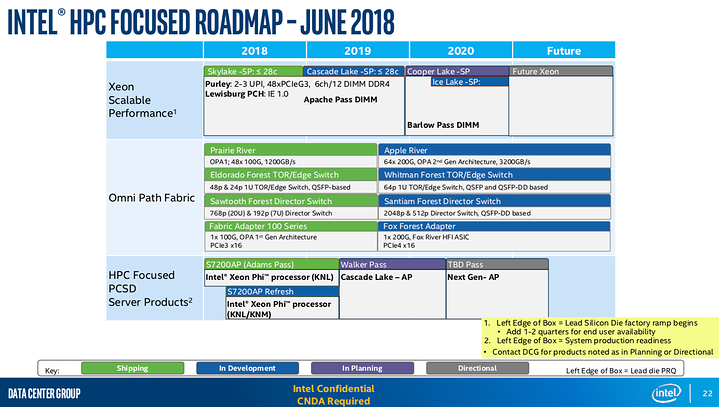 It’s unknown whether we’ll see Ice lake in other products earlier, but purportedly there will be consumer Ice Lake by Q4 2019.

purportedly there will be consumer Ice Lake by Q4 2019.

I hear Intel has figured out a way to further segment the market by removing Hyperthreadin on the i7 line on 10nm… forcing people on to i9 for that feature.

You’re probably confusing that with the latest report about the 9700k only having 8C/8T, it’s not really related to 10nm or this thread.

That’s strange considering AMD’s CPU offerings, like an 8C/8T is better than 6C/12T but it isn’t much better unless they also add IPC gains to it among other things. I know Intel is going to start trying now and this should make things very interesting. As reported by The Register, the new side-channel vulnerability on hyperthreaded CPUs has been dubbed TLBleed as it uses a processor’s translation lookaside buffer (TLB), a type of cache that holds mappings from virtual memory addresses to physical...

Maybe the i9 will be delayed to fix that…

Cannon lake NUCs with Radeon 540 graphics can now be ordered, the SKU is the same as seen earlier, i3 8121U.