In the market for a new CPU Cooler

Hello my fellow PC enthusiast. Skull back for another question for you guys. I am in the market for a CPU cooler for my Intel Pentium G3258, I am planning on putting a hefty overclock on it using my MSI Z97 PC Mate Motherboard. Here is the list of requirements

Arctic cooling Freezer i11
It is really important that it is "i" not "A". 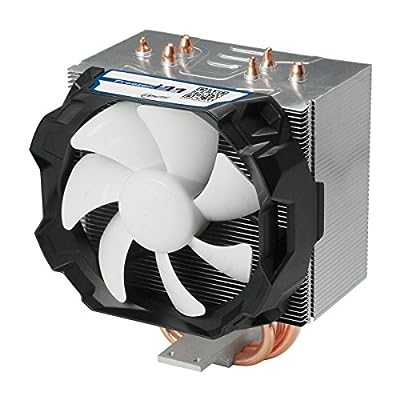 Great Cooling Perfomance for Intel CPU The CPU cooler ARCTIC Freezer i11 provides 150 Watts of peak cooling power and is an ideal replacement for stock Intel CPU coolers. It features 3 direct-touch do ...

You can probably score a midrange AIO (H80 or the likes) for $50 or so. A single radiator should be able to shed enough heat for your uses.

I agree with that. An aio worked pretty sweet on my g3258 but the caveat is to make sure there is good airflow for the mb vrms and such. So if your case has limited airflow an aircooler might be a better choice.

Case is somewhat limited because of the lack of case fans, only have one exhausting right now. Do plan on adding more in May. I actually found this cooler, http://www.newegg.com/Product/Product.aspx?Item=9SIA66Z25Z9878&nm_mc=AFC-C8Junction&cm_mmc=AFC-C8Junction-PCPartPicker,%20LLC-_-na-_-na-_-na&cm_sp=&AID=10446076&PID=3938566&SID= Looks to be a worthy cooler.

Not familiar with the brand but that should do the job in an overkill kind of way. Reasonable price
I mounted a D14 on mine also. :)

Can you find any benchmarks to figure out its level of preformance ?

I'll do my research. Might reach out to the company to see if I can get a review sample

Looks like a damn fine cooler at that price of $58. Better looking than the Noctua's imo (though not as pretty as the Cryorig r1 ultimate...) but those are $100 coolers... I generally prefer air because it looks better than AIO watercooling, lasts longer, and is typically quieter. From those results on anandtech I'd certainly say it's worth every penny of that $58 and then some.

That's a pretty good cooler as well... but i believe the raijintek is a better performer (though don't quote me on that).

I would say something from Noctua would be your best bet tbh. Noctua has recently redone quite a few of their coolers with an 's' badge to signify better compatibility with things like ram, etc.

The Raijintek Tisis is almost on par with the D-15 in terms of cooling performance and has the same (effective) noise level according to the reviews posted by @Freaksmacker and right now the Tisis only costs $58.

Fin density is a bit lower, and there are only 5 heatpipes instead of 6; regardless, marginal changes and for 58 bucks it would be worth it.

Yup a lot of companies have really caught up with Noctua in terms of performance now, I suppose it was only a matter of time what with cheaper parts being available and limits on cooling capacity, once one did the others could learn and catch up.

That said I have a D14 and it is probably more than enough for what I will ever need. The other upside with Noctua is they will supposedly send you new mounting hardware for any new sockets that some along if you ask them. So my D14 with the improvements with heat output in new devices and new mounting hardware should be good for basically ever.

Should I build a second rig though, I really would like a Cryorig R1 Ultimate.

Noctua is verified to give new mounting hardware for new sockets and no additional charge (at least in my experience). Plus the warranty on Noctuas are absolutely fantastic. They're almost unparalleled in terms of tower coolers IMO.

So I made my decision and went with the Raijintek TISIS. Wonder if it'll fit in my Ostrog? Which is a mid tower case.