In an attempt at going silent

I recently water cooled my Rx470 a couple weeks back with a Kraken G12 in an attempt to quiet it a bit. I had taken some pictures and decided to share it in case anyone may be considering a Kraken G12 or happen to be in a similar situation.

Be forewarned that this is not the most aesthetically pleasing build and there is a slight bit of jank involved but it works and hopefully for a long time to come.

This is the setup before, R7 1700X with R9 390 passed through to Win10 VM and the Rx470 used on the host. All this was housed in a Fractal Define S. The GPU to be water cooled is the XFX RX 470 and the AIO used was the EVGA CLC 120mm. The NZXT fans were replaced with Noctuas. 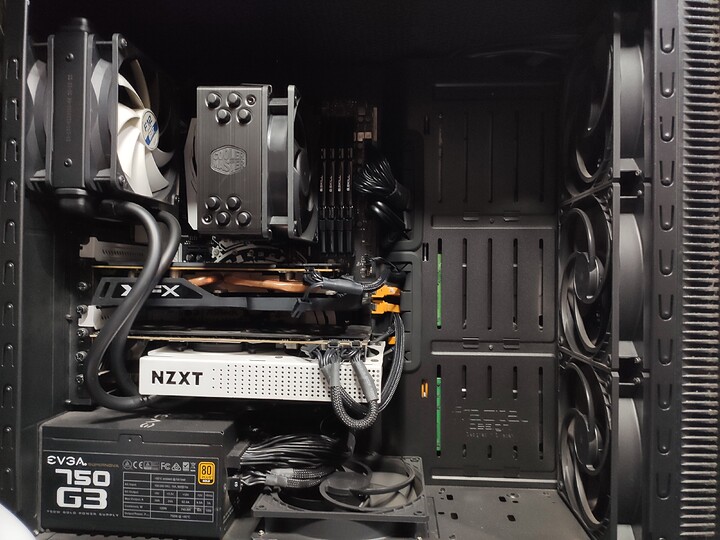 Upon dismantling the 470,I noticed that the VRM was on the left of the card and would not be cooled by the Kraken fan. Unfortunately, I did not purchase any VRM heatsinks beforehand as I never had to with the 390. 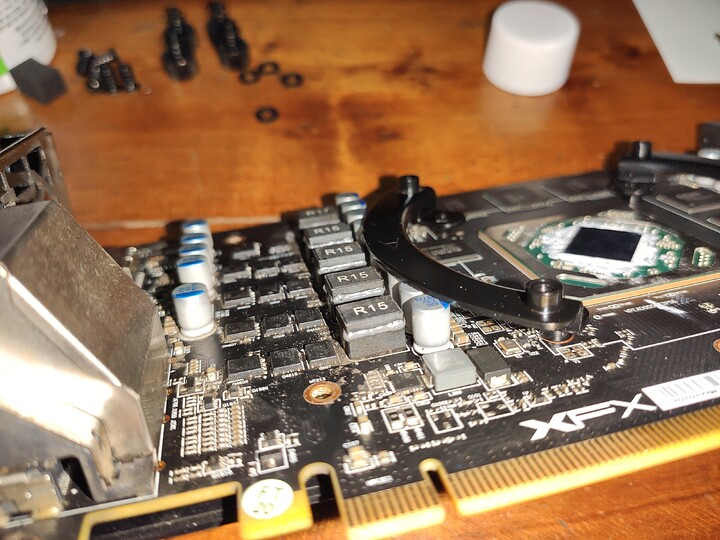 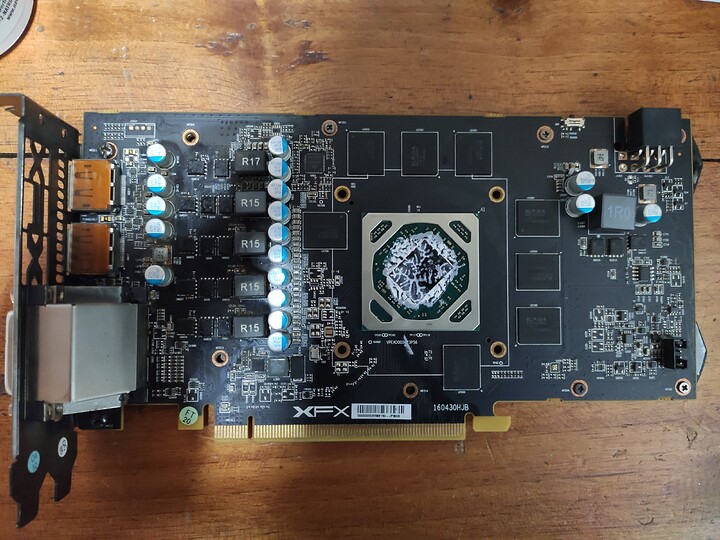 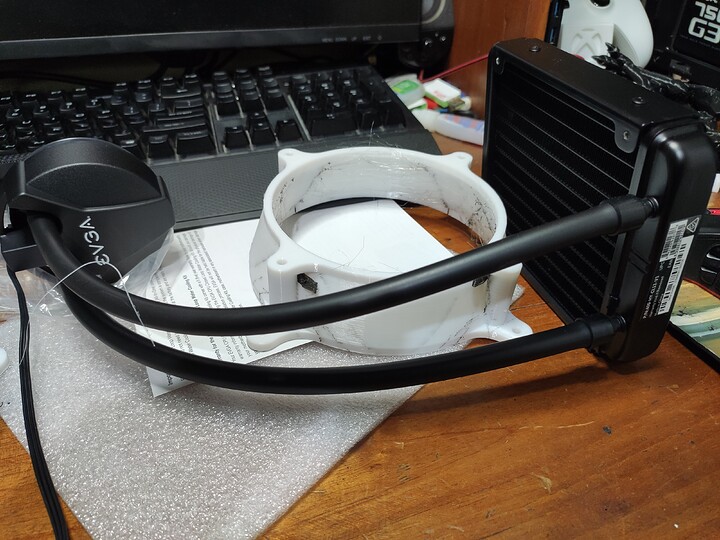 Second time around installing a Kraken G12, I can say that the installation processes is relatively simple, install mounting bracket, install fan and AIO to the G12 then mate them together. What feels really jank is when you try to mount the completed product into your case…you start getting the thought of was this really a good idea 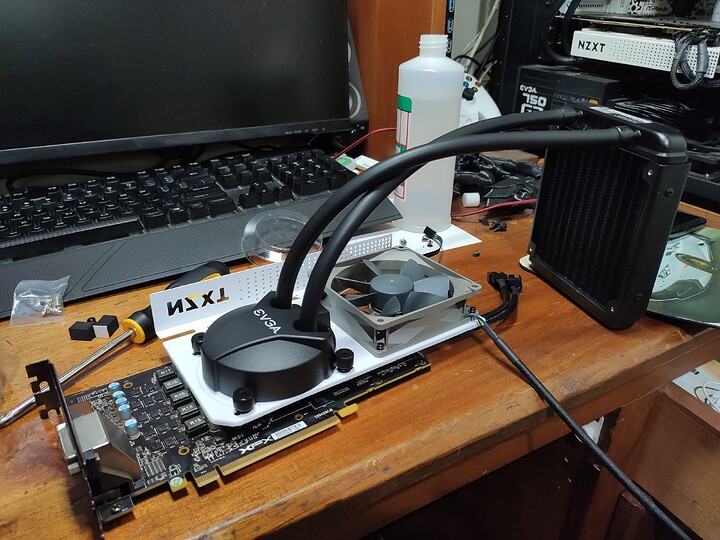 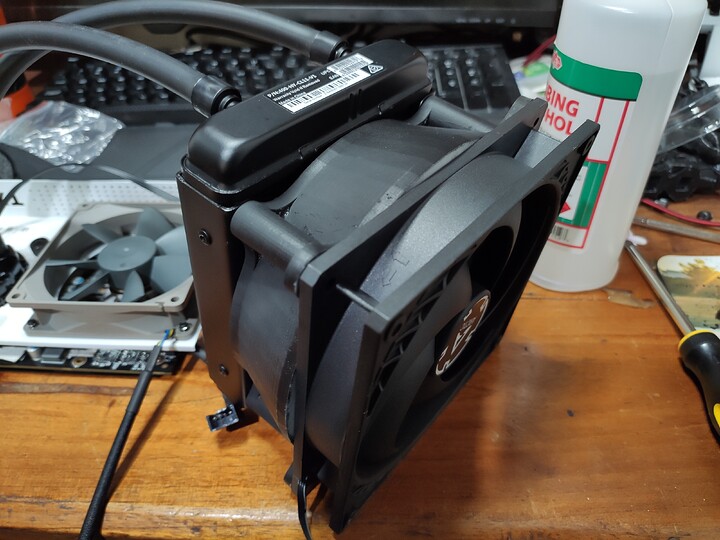 Where the issues start to crop up: 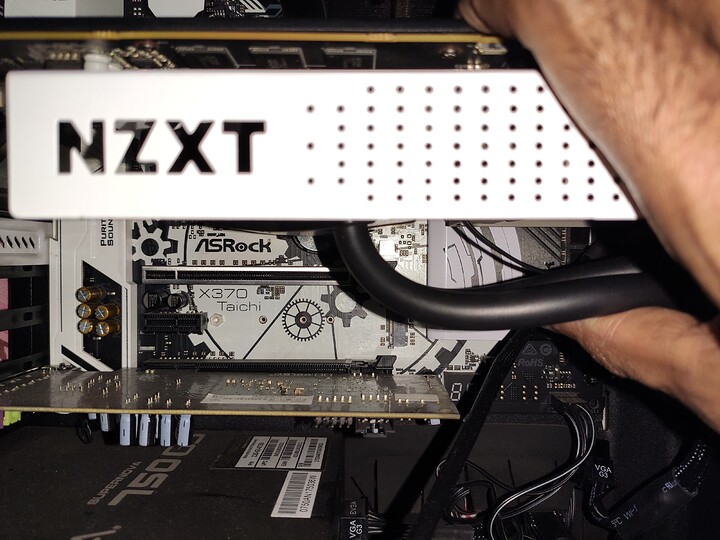 With the 470/G12 combo installed, there was no way to route the cooling hoses that would allow the R9 390 to be re-installed. Yes, I did try jamming the 390 into the slot…that of course did not work. No problem as I decided to swap AIO between the 390 and 470. The 390 is equipped with a Corsair H55 which is lower and the hoses can be swiveled out of the way. 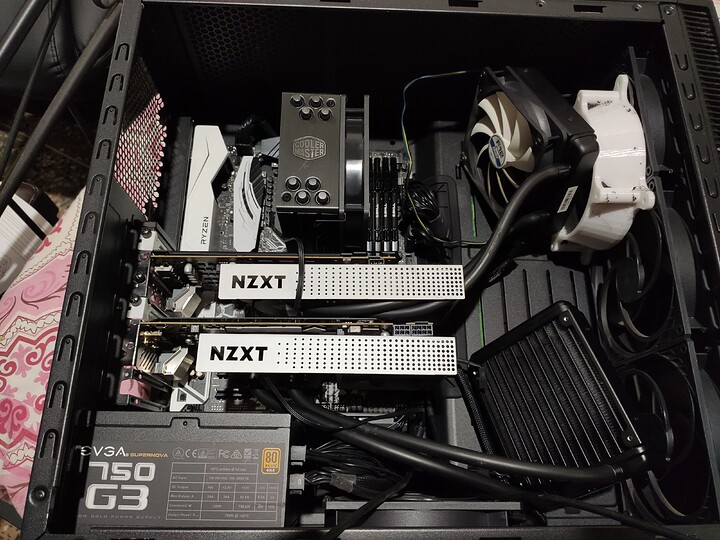 The cooling hoses of both AIOs were too short to reach the front of the Fractal Define S. Luckily the fan adapters were able to remedy this shortcoming.

Unfortunately slapping the EVGA cooler onto the R9 390 created another clearance issue, It now smashed onto my additional sound card: 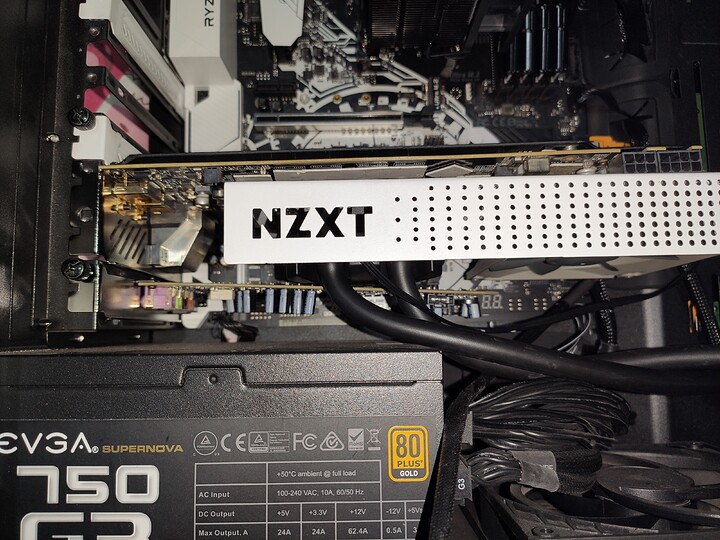 The EVGA pump cover was too tall and came into contact with the sound card. I regret not being able to go with the H55 again but the EVGA was the only “cheap” 120mm available at time of purchase. Simple fix once again: 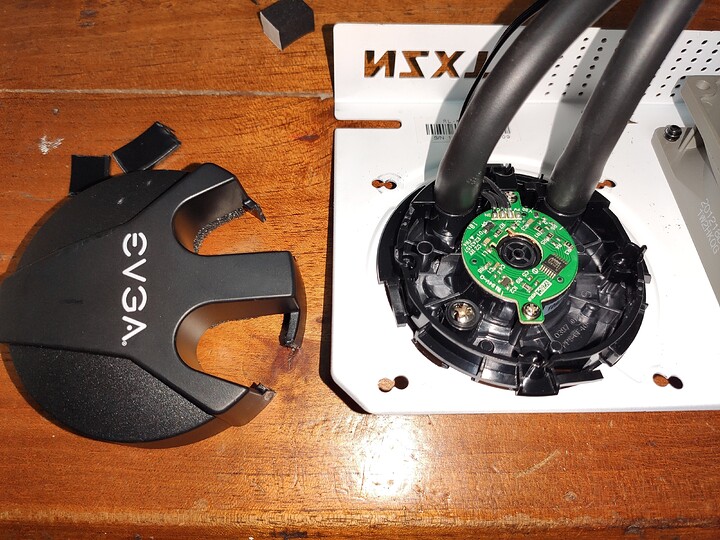 The only downside to removing the cover is that there is some foam stuffed into it which I assume acts as a noise dampener. You do hear some pump noise but really only with the side cover off.

As for the issue with the VRM cooling, I was able to zip tie a 140mm fan to both G12 brackets. 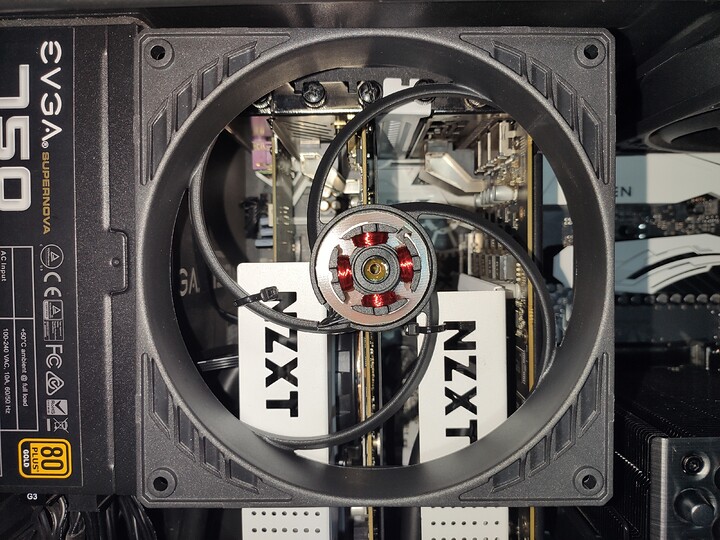 This was initially intended to be a temporary solution until I acquired some VRM heatsinks. I had no issues with this arrangement and it honestly doesn’t look too jank, so of course it became permanent.

With both AIOs installed at the front of the case, I was no longer able to use 3 140mm fans as intake. I was however able to wedge in a 120mm at the bottom of the case. 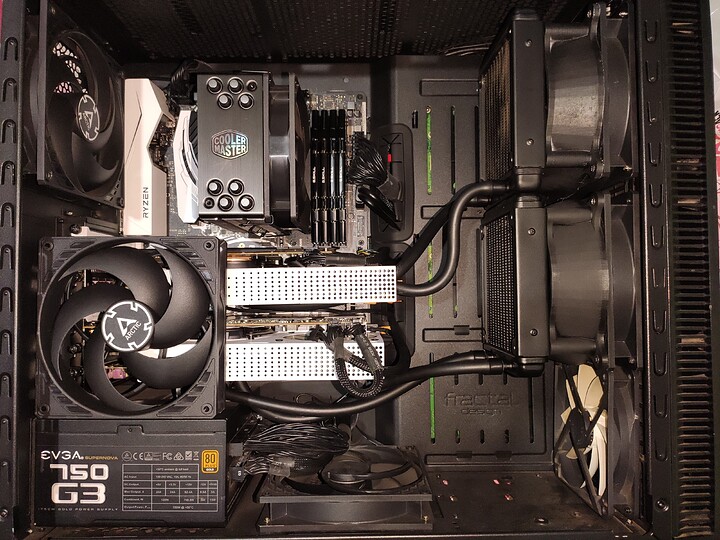 A GPU fan splitter cable was used to connect the Kraken and AIO fan for the RX470. Unfortunately the header from the 390 was not able to power on more than one fan so instead I used a fan hub to control the bottom fan, the Kraken fan and the AIO fan that was connected to the 390. 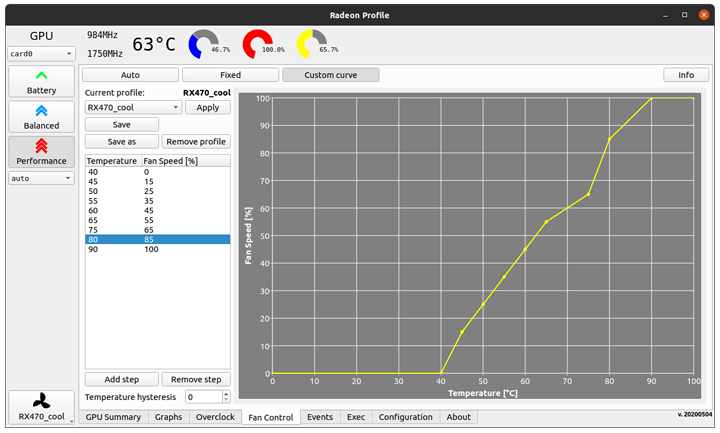 It is not what I would consider silent but it is indeed quiet or at least much quieter than before. It is around 38-40DB about two inches away from the tower and earshot is around 36-38.

The cost of a G12 and 120mm AIO is roughly around the 100USD range which probably isn’t feasible to invest on a 470 but given the current issue with GPU market it is not a bad option if you are looking for silence. Hopefully I can be able to re-use it on a newer GPU in the future.

Given how much quieter the system had become, I do wonder what noise levels would be achievable by using quieter fans, having solid side panels with dampening or even a silent focused case were I willing to invest in it but at the moment this is more than good enough.