I'm lost, how do you power this board in a very small form factor?

Let’s get the back story out of the way. I recently had one of my C2558 Super Micro boards go for my router. Because they’re cheap I had a spare on hand so I rebuilt my Router and restored from a backup. No harm no foul.

But now I have my eye on upgrading and I love me some AMD. So I saw this board. 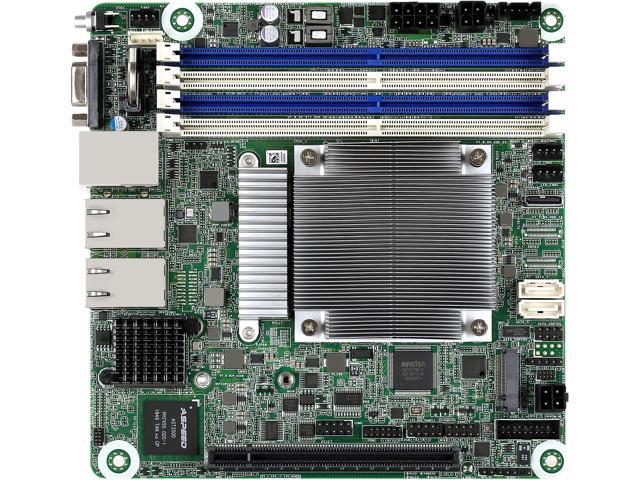 The Asrock Rack Epyc3101d4i-2t. Yup, that’s a mouthful. Anyway, I like the built in Dual 10gbe (Everything I run at home is 10Gig) and the cost is doable.

So I start thinking about doing a build and pretty quickly hit a snag. I’m not very familiar with small (Pico style) single board power supplies, but If i did this build I would want to put it in a box that doesn’t have much larger a foot print than the board itself. Something like this. 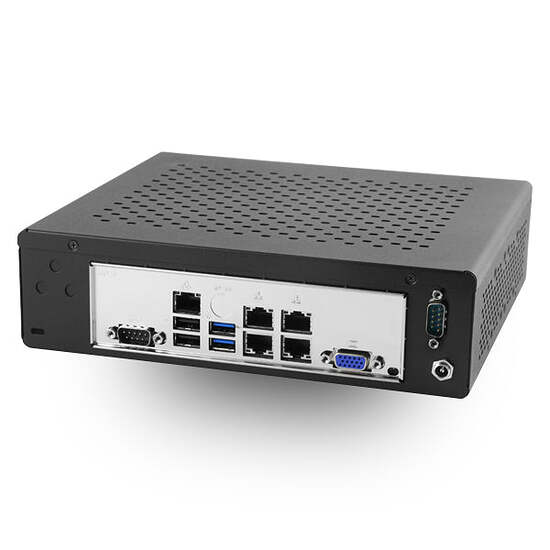 Just for reference, when I say single board PSU I’m talking about something like this. Maybe this one could even work. I really don’t know. 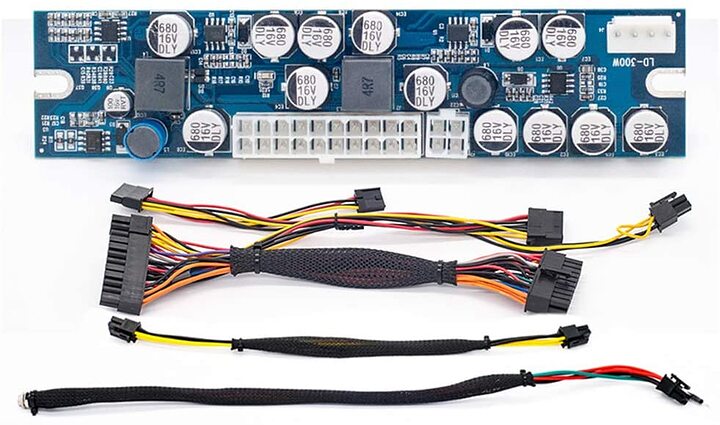 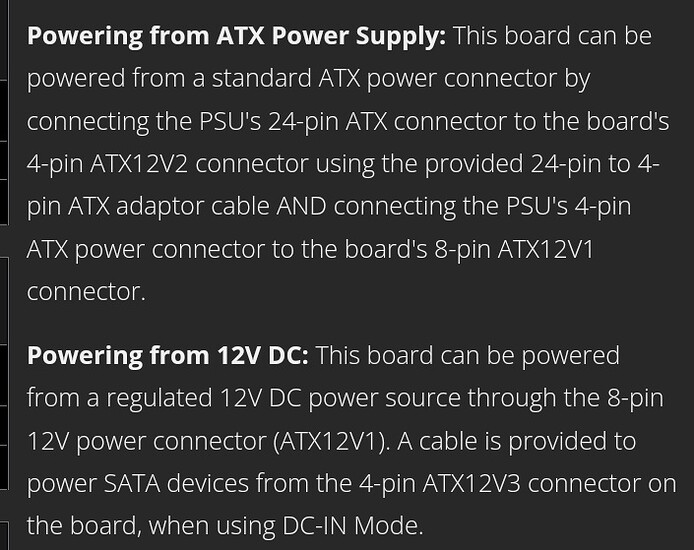 I’ve read the manual. And still, finding whatever super small PSU with the right connections and power requirements has left me guessing. And to be fair, I did come across that page as well. Funny enough, I was hoping that they would give a recommendation as to which of their PSUs to use. I probably would have purchased from them if they made my life easier.

My understanding is that the board can produce its own lower voltages and only needs 12V input. The linked PSU is unnecessary since it has a full 24 pin connector with the extra voltages that aren’t absolutely needed.

This part is a bit confusing because if you read the manual, it says you can either connect a 12VDC source to the 8 pin connector, or you can use an ATX PSU and they supply a 24 pin to 4 pin adapter along with the 8 pin requirement. Clearly this must be passing through the signal wire to start the ATX PSU which means that 4 pin connector is not a common motherboard connector with only 12V and ground. Hopefully they keyed it differently to avoid sending it up in smoke.

Either way you would still need to use a power brick to feed 12V into a Pico Psu. Short of getting dangerous with high voltage PSU mods, there is no way to avoid using an external power brick with that small of a case. You might as well skip the Pico PSU and find an adapter to go from whatever power brick to the 8 pin power input. Normally I would be concerned about wire and connector resistance if it was drawing significant amperage, but I doubt that will be a concern with a 35 watt TDP. I’m aware that TDP is complete nonsense and my 65 watt TDP R5 2400G can pull a bit over 120 watts which caused my 125 watt M3-ATX PSU to become unstable at full tilt.

I currently have that PSU on an undervolted Celeron drawing around 40 watts and I bought that M3-ATX back in 2007. I haven’t bought any of the knock off versions of the mini-box Pico PSU’s, but I’ve been satisfied with the real deal and have several other lower wattage PSU’s purchased with their power bricks. They all have lasted years and are generally about 10 watts more efficient than most standard ATX PSU’s in my experience. The caveat being if you power down, the brick is still live so I tend to have everything on a power strip that I flip on and everything comes on automatically.

Given that they include a crazy 24 pin to 4 pin adapter to use a full ATX PSU as 12V only, and the fact they mention straight 12V usage, I’d imagine ASRock must either sell a brick with the 8 pin connector, an adapter, or at the very least have a couple of approved PSU’s from other vendors. I can’t imagine them going through all the trouble to make this an option and expecting people to crimp or solder their own stuff together, so I would reach out to them. If someone dropped that board in my lap (with RAM) I’d have it up and running in under 10 minutes, but I doubt the target consumer has the tools, spare parts, and electrical knowledge, so they certainly must have a hack-free method.

A quick search turned up something that looks usable, as it has an 8 pin output with what appears to be the same keying as an 8 pin EPS connector. Another lower wattage one is available, but 50 watts with a 35W bogus TDP is cutting it way too close for me. Not an endorsement, simply a potential solution. I’d still contact ASRock first or hunt around the net to see if anyone went the power brick route. 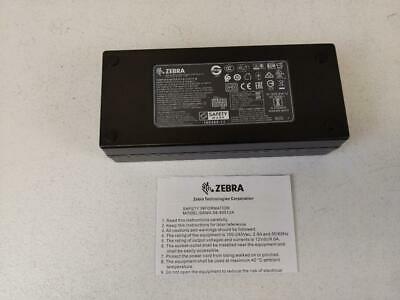 Manufacturer: Zebra Technologies Corporation. Cord Not Included. With our dynamic pricing model, our prices are always competitive. You're already purchasing the item.

Thank you for the information. I probably should ask Asrock directly if they sell a part or have approved items. It does seem like they wouldn’t leave this type of thing to customer hackery so I’ll start there.