Primary need is gaming although I do mod games quite a lot and map making in ETS2.

If those are your options, the Ryzen clearly is better. Singelcore is slightly higher, and multithread is not even close.

For gaming, i’d say both are overkill. You’d get the same Performance from an 9600K or 3700X leaving some money for a GPU upgrade. Outside of specific productivity tasks or virtualization you won’t get any benefit in going with those higher end chips.

What amd gpu is a good option from 1070 ti? Worth noting is that my budget is 800 HRK per month on 12 installments.

The only AMD options worth looking at would be the 5700(XT). Not sure if those are in budget, but anything 5XX won’t be better than your 1070ti and anything Vega is discontinued. If you want to look used, there might be some options, though i don’t think even the Vega 64 would be a huge upgrade over your 1070ti.
I’m running the same card, and i’d say an upgrade isn’t really needed. The only things making an upgrade worth it would be 4k Gaming, if you want to run 1440p high details high refreshrate or if you absultely need/want Raytracing. For anything else, the 1070ti is still Powerfull enough.

Again, both CPU’s you are looking at are killer, The Ryzen being the better deal.

Worth noting is that my budget is 800 HRK per month on 12 installments.

If you are financing the stuff, i’d just save the money on those high end CPUs to make monthly payments lower or pay for it quicker. For Gaming and such you just don’t need a 3900X. I personally got the 3600 and that’s well enough to not bottleneck the GPU.

For an Idea of what i’d personally look at:
3700X plus An x570 Aorus Elite and 16GB of 3200 Ram and a decent CPU Cooler puts you at 4800HRK. So half of what you have to work with. And it wouldn’t be any slower in Games and most Productivity tasks.

I already have 16 gb of ram, planning to upgrade motherboard, cpu and gpu.

So, do you currently have the 1070ti, or is it what you are planning to get for you build?

Great. Any specific reasons you want to upgrade from it to something newer?

If you really want to upgrade, you’d have to look into 2070 Super or 5700XT teritory to get a noticable upgrade. Both are 400-500 Dollar cards. I’m really content, that they won’t deliver enough more performance over the 1070ti to not be worth it.

Would be interesting to know what games you play at what settings.
Also, you could look at CPU and GPU usage while gaming to get a better idea of what’s holding you back.

Is this good? It would be 768.5 per month on 12 installments. I play skyrim, battlefield 1,kindom come deliverance, fallout 4, cities skylines, xplane 11. 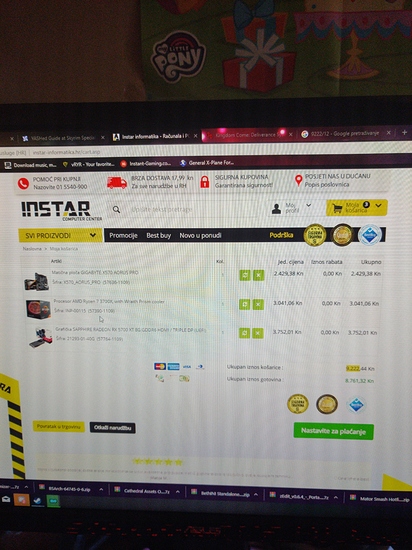 First off: The components are fine.

But again, i’d highly advise holding off on upgrading the GPU. The 5700XT is a great card but you are spending 400 bucks for a 20% performance Increase at best.

The 1070ti should be able to hit 60FPS at 1080p in all your games but Cities Skylines. Cities Skylines is heavily CPU dependend. Upgrading your GPU won’t do much for that.

One thing to remember is there are many games that even on the highest currently available hardware simply won’t do 60fps. The best example I gave give is Company of Heroes 2. No computer on the planet will run it at 60fps all the time, even at lower setting and 1080p.