Intel has taken pity on those who want to OC but don't want pet food for dinner. Only one I3 will get the coveted "K"
At "only" 150 to 180 I wasn't sure weather to put this in the cpu, overclocking or the funny section.
All kidding aside it really does look like a great OC'ing cpu and cheap (for intel).
Also surprising is a Pentium G with 4 threads at what looks like just under a hundred.

A four thread Pentium would be pretty nifty for a low-power consumer desktop.

I'm kinda curious if the i3 7350K will keep the current ECC capability of i3 processors. If it does that might make for the trifecta of price-performance-stability.

It's crazy that there's a 'margin of error' improvement over previous gen Intel chips...

Intel has abandoned the Tick,tock in favor of Tick,tock oh wait zen actually looks good! Let's throw something, anything out there!
Still it is always good for us consumers:)

A four thread Pentium would be pretty nifty for a low-power consumer desktop.

Thanks for sharing, that looks really interesting having overclocking on such a cheap chip would give you great longevity, especially as Intel don't seem to be pushing performance much with each generation now. I suppose the low hanging fruit of ever finer nm fabrication processes are no longer so low hanging. Plus without AMD giving much competition I suppose they don't need to sweat over it too much.

Hopefully its a quad core chip, although that is probably unlikely. I wonder if they are preemptively competing with AMD.

I don't think they will because that would cannibalize the i3 -K sales, assuming the Pentium to be a 2C/4T part. Which in and of itself seems a little odd because i3s are already 2C/4T. Another 2C/2T part like the G3258 may be feasible though.

Or maybe Intel is planning on stepping every CPU line up one level in the near future? So i3s will be 4C/4T, i7s 8C/8T, and Pentiums 2C/4T? That's probably just wishful thinking though.

Wouldn't matter if bclk overclock will be possible with cheapest i3...

For low power linux workstations and light gaming machines, I'm sold on the i3s. This will be a great little LAN rig CPU. For my main rig though, after seeing the 5-year-old 2600K at stock speeds demolish an i3-6100 in everything except single threads, going back to my Sandy Bridge i7 was like a breath of fresh air. Those can be had right now for $150 used. I don't expect this i3 to be all that much faster than a 6100 - those are already damn fast to begin with.

This is the Kaby Lake setup. You still need the I5 for 4 cores. But two cores 4 threads blurs the line between the Pentium G and the I3 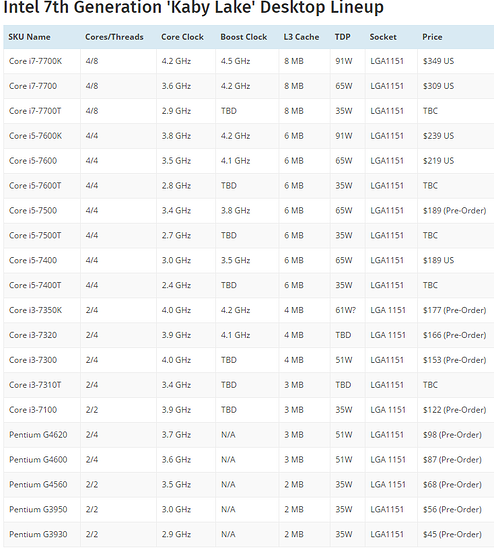 I can almost guarantee you the i3 7100 will be faster single threaded, but the G4600 will be better multi-threaded (and like $35 cheaper).

Intel, what are you doing?

Gotta love Intel's naming schemes, pretty pointless, since their i5 4300U is like an heavily underclocked i3.

They're the same architecture, so yes, the 7100 will be 8% faster in single threads, even lower depending on how good the clock scaling is.

Gotta love Intel's naming schemes, pretty pointless, since their i5 4300U is like an heavily underclocked i3.

I have always laughed at the mobile Core i-U processors. Apart from 1MB difference in cache and clockspeed in some i5-U SKUs, they are all exactly the same. Hyperthreaded dual-cores.

Yeah, too bad I am stuck with that option on tablet PCs, but it's a shit ton better than an Atom/m3/m5 and m7's. Those are the real jokes. After all, the U-skUs are only heavily underclocked i3s, and not THAT much worse like a Q6600 would be today. Where as a Q6600 still keeps up or beats even modern Atom and m3 CPUs.