I want an actual mic that isn't 250 dollars

I want to work on my youtube channel again. I like the format that people like NakeyJakey and Raycevick have, and to do so I’ll need a microphone. At the moment I have my razer Kraken headset, and the mic is clear, but it doesn’t replicate voice quality very well. Without blowing my load on a Rode NT1 and a dac to match, what is out there?

Blue usually comes to most people’s minds, but I’m worried about noise. Do they have noise issues? I’ve been looking at a little samson mic for a bit. Its not A grade or anything, but its small, folds up, seems ok to me.

Then again I’m some shitlord IDRK whats good out there.

I want an actual mic that isn’t 250 dollars

whats your definition of an “”“actual mic”""

Blue Yeti (and Snowball) is one of the most common mics people use, they’re generally a good all-around choice. Not the best, but definitely good.

AT2020 is another good one in the same category as the Yeti. IIRC Logan used the AT2020 in the Tek Syndicate videos for a few years?

Both can be had in a USB version, so no ADC required.

Not a headset mic.

A blue snowball is technically a real mic, but the quality is questionable to me.

I have a blue snowball and it’s fine. What really brings it to life is this free software called Voicemeeter. It’s not bad by itself though.

then I would highly suggest the at2020 either usb or xlr if you would have other uses for a mixer, I got the xlr version in a combo with an arm and pop filter

+1 on voice meter I use it to duplicate sound sources

Antlion ModMic. Nobody can touch them on quality, price or versatility. You can setup in Omni-Directional mode and use it like a Blue Snowball, except its higher quality. Or directional mode and attach it to your headset. It is hands down the best device I’ve ever used.

Without blowing my load on a Rode NT1 and a dac to match, what is out there?

A bunch of USB mics of varying quality from all the brands (Samson Meteor, Blue Snowball, Marantz PodPack 1).

As an owner of a USB mic who also gets to play with professional gear sometimes, get an audiointerface and plug mic and headphone (or amp/whatever) into there.
One option would be AKG P120 + Behringer U-Phoria UMC202HD

Antlion ModMic. Nobody can touch them on quality, price or versatility.

I would not be so sure. 50 bucks is the segment in wich a lot of lavaliers play (Rode SmartLav+, db Tech LMB 100M, Beyerdynamic TG L34, etc.). And personally, they all beat the ModMic in quality and price/performance.
When you have (or are looking for) new headphones with 3.5mm jack, the “Byerdynamic Custom Headset Gear” is another option with exceptional sound quality (same price point as the ModMic).

Good looking out man. I’ve only dabbled in “streaming” and semi-professional FPS gaming but not quite audio engineering.

Can’t recommend xlr mics more. USB DACs built into mics usually suck dick. If you want to deal with audio grabbing yourself an audio interface/mixer and an xlr mic will due for ages.

xlr mics are typically better, and sound A LOT better at their price ranges. If I had a USB mic I’d try to give a comparison.

As an owner of a USB mic who also gets to play with professional gear sometimes, get an audiointerface and plug mic and headphone (or amp/whatever) into there.
One option would be AKG P120 + Behringer U-Phoria UMC202HD

Exactly, A lot of the quality will come down to what software you are using. If you’re grabbing the discord audio everything is going to sound like shit because of the compression. If you’re using something like audacity or some other specifically audio recording software it’s going to sound much better.

gotta agree with @MazeFrame on this one as well, I think the antlion is only good if you don’t give a damn about your mic quality but want to keep using your really good headphones.

All that said, @noenken makes a subtle point, audio interfaces can be expensive, if you’re just looking for an amp/mic input it’s not so bad, anymore than that and you’re looking at $300 for the whole setup (That’s about what I spent, although I have kept this setup for 4 years now or something.)

So it’s really up to how much you have to spend and whether or not you could put this stuff to use if you’re not doing youtube.

Also share a link should you upload something. Nakeyjakey inspired videos from a fellow levl1 sounds like a treat.

Edit: I found a usb mic that looks decent I’m making comparisons.
Or not, still working on customizing my login screen and getting kvm setup it’ll be a minute.

I have a Superlux E205U over here, really good quality mike, doesn’t need a phantom power (since its USB) and has a really good capture quality.
You can pick one of those, a pop filter and a boom arm for less than US$100.

Honestly, whatever cheap usb condenser mic suits your taste is probably the way to go. They are all mostly the same in performance due to the power limitations of usb. I wouldn’t bother with anything blue because of this. I use a CAD u37 personally but the prices on those have gone up since they became more popular.

The next step up is probably what @kewldude007 suggested but I’m going to say a well driven xlr is better than anything usb. If you want good sound that is the way to go. You should not however run an xlr setup with just your onboard sound card. It doesn’t matter how good it is, ask me how I know.

I’d listen to @Adubs advice here and get a well reviewed USB microphone. If you experience noise when recording, there are three main sources:

Buying a USB microphone kind of negates points one and two, since the built-in preamp was made for the microphone. Point three you just have to check.
One caveat, and the worst case for a USB mic, if the noise is passed through the USB bus, and another bus isn’t noise free, then an external mixer would be your only option (edit: meaning your USB mic is kind of useless with your computer).

If you have a guitar center or similar in town, you can go audition mics in your price range. <250 won’t get you far for condensers, but you could go dynamic. Go try some and find out if you like the sound. If you yell a lot, get a dynamic.

If you get an xlr connected mic, find one used. Mics last a long time with half-decent care. You can find a good 57 for $50 on eBay, though there are fakes floating around.

Careful with the hardware, DACs are for output, ADCs are for input. Anything labeled “interface” will do both.

Don’t get a mixer unless you know you need one; get an interface. Mixer is just adding more hardware with preamps that are already built into the interface.

USB mics are cheap. They sound cheap, but the cost is low. I say avoid them, but as much as I hate to say it, it’s not a bad jumping off point if you want something for next to nothing. I wouldn’t spend more than $50-60 on a USB mic. Any more and go get an interface and a 57, both used. Get XLR from Amazon (cheap), redco (custom), or solder your own.

Edit: Ah, just remembered the line audio cm3. Not ideal for voice but worlds ahead of any condenser of similar price. Gotta import them but if you can wait they are killer. Might throw up a voice demo in a bit.

You know, the Zoom H-series microphones wouldn’t be too bad if it’s spoken recordings. Stereo microphones give a really nice presence with voice (and instrumental) recordings.

the zoom stuff is awful for long form due to drift, and bad for stationary work; i.e., it’s built for location recording, so there are quality compromises to make it as versatile as it is. Other than that, you’re right; it’s not a bad way to get a mic and recorder in one package.

If you get an xlr connected mic, find one used

I’ve been the sole owner and user of these mics. See photos, mics have some wear and tear but are in working condition. The screen cover on the 990 is loose and comes off, can be fixed with new soldering or glue or tape. | eBay!

They’re a little rough around the edges but that shotgun mic might be good to help you isolate outside noises. Get a cheap arm and GG.

I’ve heard nothing but good about the focusrite scarlett series. The solo seems like its a good deal but I havent played with them. Maybe someone else can speak to their ease of use/quality. 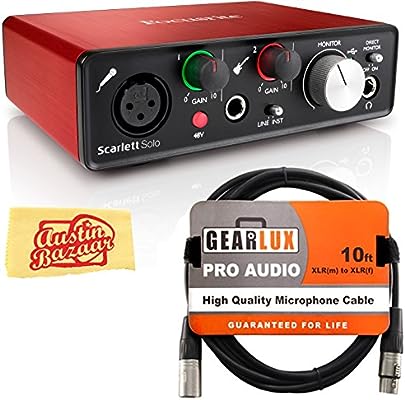 pretty much all shotgun mics are essentially omni in the lows; they should be avoided indoors; supercardioid gives the best balance between isolation and even freq response.