I-pod classic as an encryption key?

okay so its pretty easy to set up a usb stick as an encryption key but, my question is how would i get my 30gb ipod classic set up as an incognito usb key

also can i sett it up for cross-platform say ubuntu and windows?

I doubt you can do anything with the apple hardware unless you know how to do that, but you could write software to recognize the apple and do the same thing.

i know i can enable the open HDD on the ipod and use it as a flash drive for any type of file i cant just put the software in like that?

Im sure you can but then it really isnt an I pod anymore is it.

The original ipod.... I've only havked one once and it was a pain in the ass. Hinestly go get a 64 gig usb stick. The ipod classic, while being cool, isn't sata, rolls at 5400 rpm or maybe less, and when I managed it it could see the file and thought it was full because it didn't know what it was.

Sorry to shit on the idea but it just isn't as great as it sounds. The tools I used aren't really around anymore so look on hardware hacking sites. Someone on psohax will know how to do it the right way but it will still freak out over a 212kb doc.

also this all started with me finding an old 30gb ipod classic and not knowing what to do with it i, just figured i could do something other than using it as a 30 gb flashdrive

anyone have any other ideas that i could do with it?

You can jailbreak it and put emulators on it. The normal ipod things. Think of it as a mips computer like a razpi. Its not so simple to use as a usb but not so complicated to turn it into a phone. 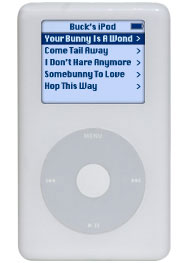 i doubt any games would be fun on this thing

Hey if I can play pokemon in a sansa clip nano and not know 4 hours went by I think I would be labeled dead with an ipod and earthbound.