I need help with my lab in C++

so im stuck and the teacher refuses to give assistance when i ask her for help she just say im not giving you the answers. wot even stear me in the right direction

so this is my code and out put 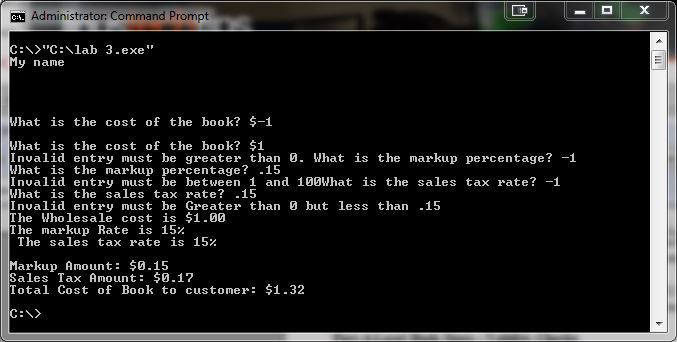 so basicaly this is what im supposed to do

Modify your code to check for valid input values. Specifically:

The Wholesale Cost must be positive. { I.e. not zero or negative }

The Mark-up Percentage must be positive but less than or equal to 100%.

The Sales Tax Rate ( Percentage ) must be positive but strictly less than 15%.

Use the most appropriate LOOP construct to get user input until a good value is given.

Be sure your code tells the user that the value entered was wrong, when it is invalid.

thank you in advance for any help you may provide

look closely here and anywhere else that has similar checks. less than 0 and less than/equal to 100...

Here the cout about the invalid entry must be inside the cycle with an if condition else the message is always shown even if the value is valid. Also the message and the cycle are not compatible on the message you say greater than 0, but the cycle accepts the value 0. This solves the:

Here you made a mistake, this condition is the same as Markup_Rate<=100; And again the message about invalid input is always shown.

If you apply the changes that I told you I think the format will be corrected.

PS: My suggestion is to always put \n after printing out a string, makes things easier to look at.

If you have any more question I would be happy to help.