I need an advice - what Distro for parents, that have no idea what they are doing?

I installed Ubuntu Gnome a few weeks ago on my laptop and I'm pretty happy with it so far.
Now I want to try again and look for a Windows similar Linux environment for my parents.
They have no idea, what they are doing with a computer. I'm happy, that my mother can turn on the PC and open the browser (that's it for the most part, for her). My father is a bit problematic, because he's very curious but don't understand the concept of secure behaviour on the internet. Also he uses russian sites for the most part, because my family is from russia. So he constantly downloads a bunch of viruses and I end up installing Windows 7 plain new on the PC.
I also don't live near them, so I seldom see them to have time for these problems.

I tried Ubuntu (unity) once or twice and my father didn't like it and always went back to Windows.
What would you suggest to me doing? What Linux distro could I use, that is very similar to windows?
Or should I just install virtual box and run Win7 on startup? I just got this idea, thanks to Wendells video about virtualization.

Suggestion would be zorin os 9 (based off of ubuntu, desktop 90% acts like windows in my expereince). or linux mint

i also suggest not messing with things if he likes it. but you no experimenting not bad either.

Stick them on linux mint or stick to windows. Don't use zorin os, it's bugged up the butt.

Look at Xubuntu. By default the Action Bar is at the top of the screen if you put it at the bottom it will work very similar to Windows.

Setup my mother-in-law with Mint 17.1 on her new machine a few months ago. She's very much enjoying it. All she does mainly is web browsing, simple games and document editing.

And just last night I introduced my parents to Lubuntu (old machine with weak specs). After showing them the ropes, their reaction was "how has this not taken over the world yet and why isn't everyone else using this!?". Aaaaand my job here is done... ;)

If you google there is an guide to make Linux Mint look exactly like Windows 7, you could try that.

Zorin OS is bugged? Too bad, I thought it looks pretty promising.

Thanks for the recommendations so far. I think, I'll try it with Mint first.
I tried Lubuntu on a VM some time ago and didn't like it personally very much.
Xubuntu also looks good. That will be my alternative :)

I know this is gonna sound bat shit crazy, but opensuse with gone works really well for parents.

It is super simple to set up different user accounts and assign privileges. You can easily have 1 system admin account and then have a user account for your family. That way they can not mess things up too bad.

Gnome with cairo-dock works really well too because you can set it up where they only have to press 1 freaking button to do what they want to do.

My mom could not use linux mint for the life of her. Because things looked different, she basically told herself that she did not know how to use it, and went back to windows all the time.

I also installed a bunch of extensions that make gnome almost totally inert. There is no hot corner bull crap, and I installed a slingshot extension, so when she clicks applications, she can see all her apps without having to figure out how to use something as simple as a god damn menu.

But there is no mystery, there is little to no chance she could screw something up without my admin password, and she can do all the work she needs to do.

That pretty much sounds like my parents.
Thank you, I'll try it out in a VM and see how things work with Opensuse and Gnome :)

When she gets home, I will post some screen shots of her desktop environment (it is on a laptop that she has with her) .

It is basically an OSX look alike, except for the fact that things actually work correctly, and I removed a lot of the functionality : P

Opensuse with Gnome is pretty darn cool and seems to be quite user-friendly. Will second that.

This is one of the down-sides to Linux (if you can call it that) - there are almost too many choices and options to achieve the same end result. :P

I switched my mothers computer from XP to Lubuntu five years ago. She can't really tell much difference, except for the colours. She is not very good with computers, can't even copy and paste, but it works for paying bills and going on facebook.

Here is my mom's desktop 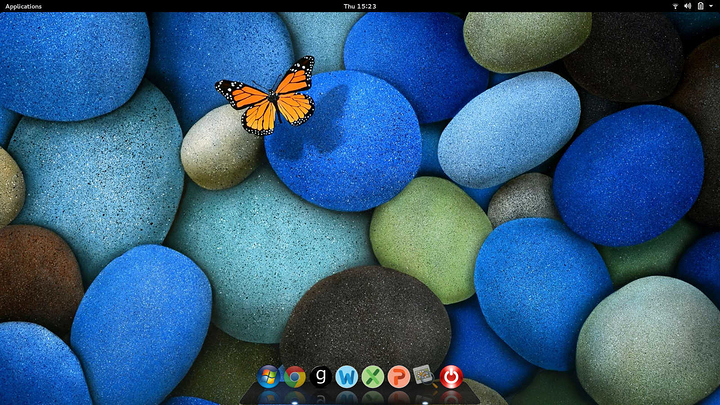 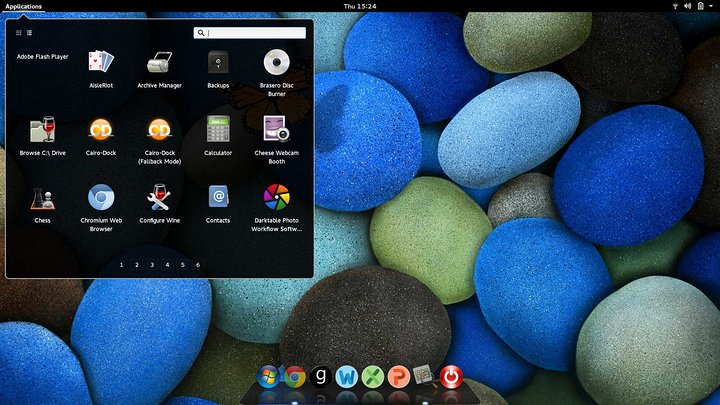 I also want to make a couple of things very clear.

I spent a lot of time themeing things so that my mom felt comfortable in the environment.

The application menu looks like a windows start button, chromium looks like chrome, and I even integrate microsoft office into the dock.

The dock auto hides, so she does not have to go chase after it, and things like the message tray is disabled. So everything she needs is right in front of her face and there are no weird pop ups that will scare her.

Everything is as simplistic as I could possibly make it.

@Tjj226_Angel
Looks pretty clean and straight forward.
I guess, I have to prepare it in a VM and create a bootable ISO, so I can install it right away the next time, I visit my parents. Simplicity is indeed very important in that case, great job!

@GalactiFish
I live in germany and I think any kind of a Mac OS environment would confuse people, that don't get along well with technology and only used Windows so far. Apple is still a minority in germany. At least that's how I feel.

Hmm a couple of years ago I put on my mother's notebook the Elementary OS and she love it! It's nice and you can't do to much, only if you really know how..so for parents point of view is good in my opinion!

But Luna is kind of outdated and Freya still is a beta version.
Nothing against eOS but it's just bad timing right now.
If you install Luna it's based on the 12.04 kernel so you don't have the newest software which probably is OK for parents, but in 2-3 months when they got used to Luna you will update to Freya.
If you install Freya now it may have bugs and give them a bad idea of Linux.

In terms of previous posts - TL;DR
I just want to share that my mum uses Linux Mint with Cinnamon as her daily driver and she's very happy about it. It's also similar to Windows.
We've tried eOS but it turned out to be poop. I wouldn't recommend Zorin as a daily driver as well, they are distros that are pretty and interesting, but not very functional.