I need 9 displays with one PC [SOLVED]

Currently I have two computers with NVS 510 video cards in them supplying 9 different displays, I want to move to a single computer with two video cards. I tried it with a 2200G thinking that a 4x by 4x PCI-E lanes would work, but it did not. So I’m Planning on switching it to a 1300X but I just wanted to know if anyone had experience with doing this sort of hing with a 1300X specificall run two video cards on it, thanks.

Also I have an X370 mobo for the build if someone thinks that might be the isse, though I’m not running them in SLI, so I’m not sure if that would matter.

Cheap, we’re using NVS 510s so we have mini-display to HDMI connectors going to the TVs.

My Client Needs to Run 5 Displays: Having Issues GPU

Our company has a client that requires running 5 displays. Two weeks ago we purchased and installed this card in his system: It has been working, but after upgrading him from 4GB to 8GB of RAM, I am only able to get two of the displays to work. I have tried re-installing the graphics driver, but no luck. This is frustrating because we have also tried using an RX550 in combination with an MST hub, but were never able to get more than 4 displays to work. Does anyone have any advice? And what setup would you use to power 5 or more displays?

As mentioned in the thread @mutation666 linked, there is the Matrox C900 wich can drive 9 displays via miniHDMI.
Price is arround $1500 last time I checked.

how many GPUs per computer, is it possible to take the GPU out of one computer and put them all in the same system?

You could use a V340 and virtualize 32 displays. Then you need to pack those images for network and find displays that support LAN as video source.

Then you need to pack those images for network and find displays that support LAN as video source.

I’m going to assume that replacing the displays isnt in the cards, but arent there adapters that will go from ethernet to VGA?

They’re all large TVs, yes we want to move both video cards into ne PC, that’s why the 2200G didn’t work because it only had 8 PCI-E lanes to work with.

So realistically you only need 3 GPUs that support triple monitor.

IP to VGA, yes:
(Just one example, no experience with this one) 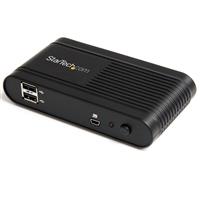 Connect to, and share a VGA display or projector over an IP network

But what of the original question?

This would save a lot of time and money, just a cheap CPU upgrade and away you go.

I already have two GPU’s that support 4 monitors, I just needed to know if the 1300X would actually work with dual GPU’s specifically the NVS510.