I made something: CAD drawings/renders for "3D" Waterblock Concept 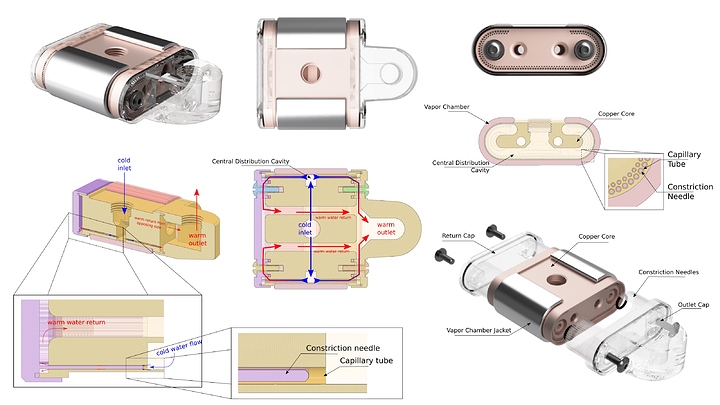 A while back I saw an insane custom loop setup with a 9900K, but the setup was really under-performing relative to the amount cooling equipment. The bottleneck: transferring the heat energy from the relatively small hotspot on the IHS, through the waterblock, into the coolant.

I’m not an engineer, but that seemed like a really silly problem to have. So I came up with a concept to address those issues and designed it in Fusion 360. This really is just a concept, without manufacturability in mind.

Looking at the pictures and diagrams, what do you think? could this actually work? Like I said, not an engineer. If I knew how to set up and run a fluid/thermal physics simulation, I would.

Goal of the design:

I’m not a thermodynamicist, but that makes sense to me. I’d put em on my home servers for a giggle.

Looks good from a performance standpoint (maybe? I am no engineer). Will be a nightmare to produce though.

Surface tension and viscosity might be a problem here. Holes like that are nearly impossible to drill. Sawing slits in the sides and soldering the vapour chamber to the ends may be better.

I figured the drilling might be a challenge. Maybe electric discharge drilling would be feasible?
The central distribution cavity is even more challenging: I don’t think sand casting is an option, given the precision required, and the fact that cast copper is more difficult to machine. Maybe slicing the whole thing horizontally, like a Sandwich, and manufacturing the copper block in two halves could work.

Surface tension and viscosity might be a problem here. Holes like that are nearly impossible to drill. Sawing slits in the sides and soldering the vapour chamber to the ends may be better.

Not quite sure how to imagine what you are describing here. Do you mean slits on the outside of the copper core? I could imagine something like a separate micro-channel jacket around a smaller copper distribution core instead of capillary tubes.

Do you mean slits on the outside of the copper core?

Interesting Idea. Would require redesigning the distribution geometry. I think I’ll mess around with your idea it and see what it would take to make it work. Thanks!