I know the Used Vehicle Market is rough but

Ah, you are forgetting it comes with the Mythical RTX 3090 Ti GPU

Yeah. My coworker just bought a new Ranger for ~28K and traded in his 2002 Blazer for 6500 with ~80K on the odometer. With the trade in value of the Blazer, he was basically able to pay cash for the truck.

The blazer is currently listed at 8K at the stealership right now.

But as is the way you have to be happy with none in the down time, unless you have multiple.

Great time to sell, terrible time to buy, there is no leverage for the buyer currently.

And Kia can’t/won’t sell their new EV6. I saw a story yesterday that some dealerships are requiring a credit check just for a test drive, even if paying cash. On top of that, most of the dealers are only stocking the GT variants with a $15-25k add-on top of the MSRP.

Okay the GT only and markup for that makes sense in an evil screw the consumer way but not selling them makes no sense.

Unless they don’t want to have what appears to be empty lots and they only have the 2 or 3 on display.

Only thing worse than a showroom reluctant to sell you a car… A showroom with no cars to sell.

I found the article again.

That makes no sense.

The EV 6 is coming out on top of a lot of tests and as a complete package is looking great.

So odd they are tanking their own companies futures.

dons the crinkly foil headwear unless they are all Detroit stooges… Dun, Dun, Duuuuuunnn.

I guess that buying a car at a actual brand dealership is going to be more expensive,
then buying one at a universal garage.
At least that is what it’s like up here, a brand dealer does ask a premium for their cars.
But in most cases that is because they likely know the complete maintenance history and so on.
And they have to give some brand warranty etc.
Sometimes you can score a good deal at a dealership, but it’s all about the margins really.
However with brand dealerships the entire brand has to profit from it.
So they do have to ask a premium price, they simply have smaller margins.
In regards to a universal garage they don’t have of to think about any of that.
They have larger margins and you can score a good deal on paper.
Because a universal garage doesn’t have to share their profit margins with their mother brand company so that all the other daughter brand dealerships can keep their lights on sorta thing.

Yeah Thats all well and good, but they are not letting people buy them at all if they can mange it it seems.

Yeah that is kinda the thing.
At least up here most dealerships mainly exists because of the lease market.
Young occasions (used cars) that are trade in at the dealer ships after like 3 years,
when the lease period ends that is mainly where their profit margins be at.
But allot of those young used cars are also getting exported.

So yeah of course idk how the current used car market is over sea’s.
However it’s not really getting better everywhere indeed.

So yeah of course idk how the current used car market is over sea’s.
However it’s not really getting better everywhere indeed.

Gonna be worse with that tanker that went burned carrying all those VW’s and Porsche’s.

Autsch yeah not the first time something goes wrong on the sea’s.
Volvo for example has a actual factory in the US where they build certain models like the S60.
I think that is actually a pretty smart move.

After my car got sammiched up, I was immediately investigating market, in anticipation of worse-off predicament news [car being written off]. I firstly looked at 4Runners [a long running goal car]. One listing I still remember, that had me feel personally insulted
2012 SR5; 125k, looked pretty physically bruised [dings and rust scale for days]
0 Carfax… Asked 25k

Most cars I looked up thru near 3months, were either overpriced, located too far off to assess, or were in questionable [poor] condition. It only took seeing one car on the road, that gave me the “ahahh” and “How did I forget about that car”… Short a week later, I ended up with a car [had to have fair bit of DIY / mechanic servicing done, but was expecting that]

I’ve been looking from afar, to entertain a secondary / standby car.
By golly, some pricings are even FURTHER hella dumm 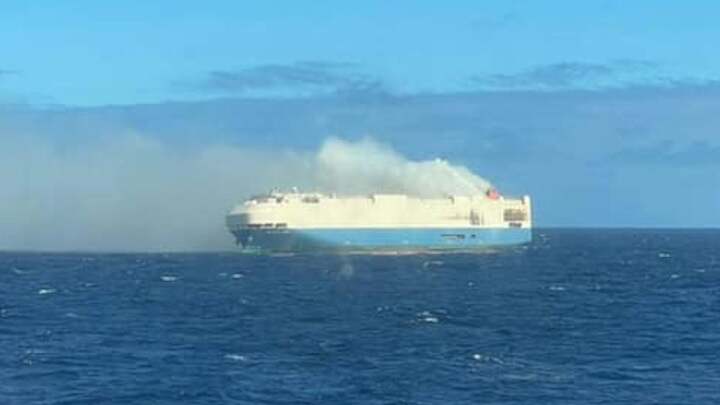 Cargo Ship Full of Porsches, Bentleys and VWs Is On Fire and Adrift in the...

The Felicity Ace’s crew has been rescued, but the fate of the vehicles on board is unknown.

I am in the current process of selling my 2018 Civic SI for 3k less than I paid for it back in 2018. My buddy sold his five year old diesel for five k less than he paid five years ago for it.

I can’t drive anymore so I am using the money plus my savings to build me the ultimate smart tiny handicapped oriented smart home lol.