I just realized after building my first PC in forever, that the ssd in my laptop writes at half the speed my HDD in my computer runs at.

Not sure how to feel about this. Can anyone explain this? Is it to do with power efficiency or there abouts?

That doesn't seem right at all

I know right? Here is a novabench result for both. 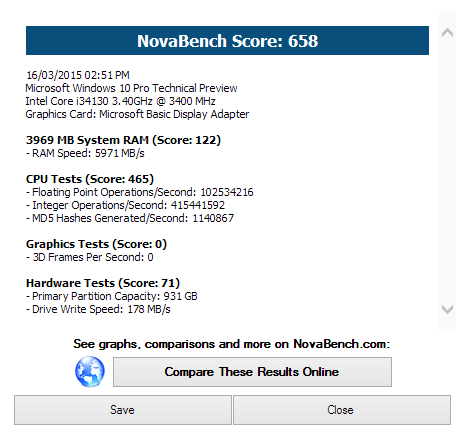 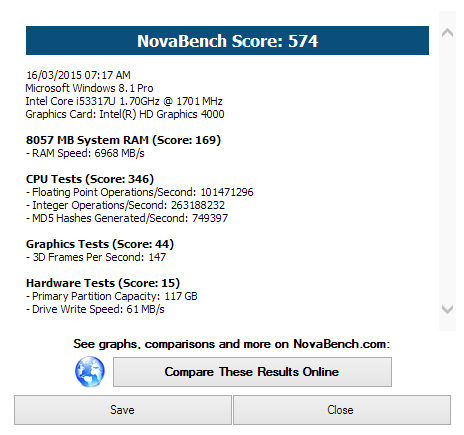 my father has been complaining that our old media machine full of HDD's is faster than his laptop with an SSD. Simple fact, Laptops oftine dotn have trim for SSD'sor the SSD doesnt support trim. Leading to slow read and write.

It isnt down to the SSD (Unless the manufacturer used a terrible SSD) but down to the laptops chipset and drivers.

Ahh that's definitely wrong if that's an SSD, I don't know what could limit it other than the sata connection if the laptop manufacturers were brain dead and stuck it on like sata 1 or something

Would the fact it is an ultrabook and they even unvolted the cpu lead to lower ssd speeds?

unless your cpu is maxing out, no. Purely the features of the laptop at fault

I fear that may be the case. It was a school laptop, I wish they would have bought a laptop slightly more optimized. Oh well.

could run a smart test. Or make sure the firmware is up to date.

I do not think I have ever updated firmware. But drivers I have done. I have never update bios too. >.<

What SSD is in it? If it is a crappy low cost SSD that relies on data compression then yeah it is going to suck in benchmarks. Especially if it is old and hasn't had firmware updates or TRIM enabled.
I mean look at the Kingston SSDNow! V300. It is poop. In benchmarks it will put out speed around 65MB/sec

It came out in 2013. I will go through BIOS and see if I can enable Trim and all the other thingys. I always put off firmware updates unless I knew what they did.

If >= windows 7 then trim should already be activated. This though would not account for such shit write speeds (you can turn TRIM on and off via the cmd prompt btw). Sandisk are the supplier of ssds for most HP laptops from memory. Decent enough drives but not immune to the odd dud drive.
Run more benchmarks - AS SSD, hdtune etc. Compare speeds to other drives of the same. If its any easier head here for benchmarking your drive >> http://ssdboss.com/
Update everything, even reinstall windows if you can.
If speeds are still shit - return/rma the unit.

Ssd is the same regardless, the same ssd you would put in a desktop can go in a laptop; it all comes down to connections, firmware/software and which brand and model.

Software and drivers arent as big a deal. Since that can be changed. So complaining about trim is needless as that can be downloaded and updated.

Connections to the actual motherboard is another story entirely. If the bandwith is limited, you wont get much from it. Same with which ssd. If you got an old gen ssd, expect it to run slower.

I honestly think it may be a fluke. Because around a year ago I got close to 250mb/s on the ssd. But have no screenshots of it. I'll do another speedtest.