I have just noticed something

A small but noticeable thing...

I always like my PC to be quiet. Keeping things cool but still quiet can be quite tricky. The sound of droaning fans and whoosh of air can become quite wearing after a while. I sit at my PC for a large part of the day. I swapped over to Linux full time a month back after spitting the dummy with Windows 10 shenanigans. I have run Linux on other computer for many years but not on my main rig.

So I have been happily using my PC every day without issue and I'm a happy camper. Yesterday after struggling to sort out our Insurgency server I need a small program that only runs on Windows. So I installed Windows in a VM on my PC. 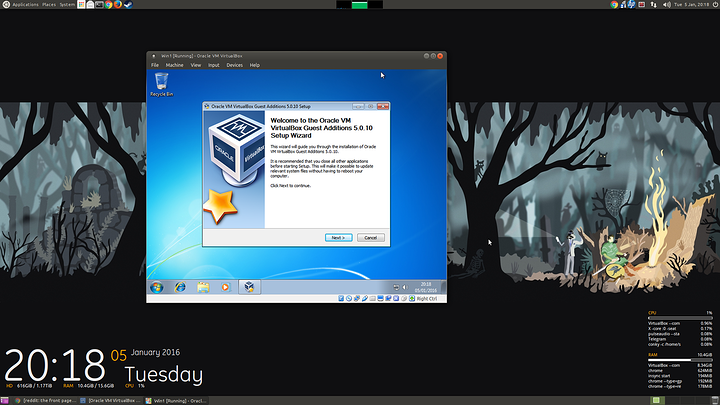 So today I'm sat here doing whatever and I have Windows running doing it's update thing, and I notice something. My PC has become noisy. Fans are running air is whooshing, at this point I realised this was the sound my PC made all of the time before. This sound is back because I'm running Windows again. If I'm to be honest I had not noticed how quiet my PC had become with Linux. I guess noticing the absence of something is harder than something new.

WTF is it doing? This is at idle! 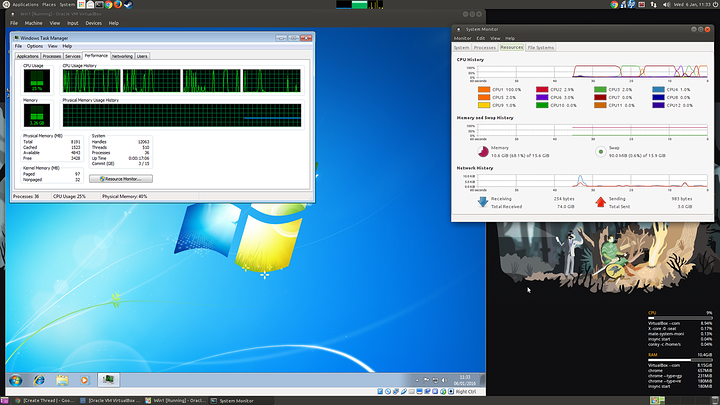 You do realize that your PC must work harder to run Linux + Windows rather than just Linux. Trying running a Linux distro in a VM on top of your current, I'm sure your fans will ramp up just the same.

Although I will agree that usually Windows is heavier than Linux.

look into resource monitor under windows... it'll show you whats using what.

@Ethereal Yea I know it's going to be working harder. I was struck at the time by the way my PC sounded and it reminded me that it was like that most of the time when running Windows. Something I had not noticed before was how quiet my PC had become running Linux full time. Just a small thing I wanted to share, no great importance just an observation.

@minorthreat55 The VM has 8Gb allocated, should do fine for most things. It's also got 4 cores and 60GB drive. Fingers crossed that should do for the bits and bobs I'm going to be running.

@anon5205053 It's a fresh install of Windows 7 64bit, I'm still in the process of doing all of the updates. Looking at the process and services it the update manager spanking the CPU so hard.

Yeah updates on Windows generally ramp the CPU up for a fair amount of time. Even when it's downloading updates it'll slow down the machine. That's one of the reasons I'm such a big fan of Linux, the way the updates work. Wish I could Linux to work on my machine, just won't for whatever reason.

@Nomaran Some time back when people had issues getting a desktop Linux to install and run right you would get them to try PCLinuxOS. The Distro hopper stopper. I'm not sure if it still holds true. Around ten years back getting many distros to detect everything and install in a workable fashion could be quite hit or miss. Not sure quite what magic TexStar was using back then but if you had hardware compatibility problems PCLinuxOS would install flawlessly. This is how I discovered this strange distro. Has a homespun feel and not based on any mainstream Linux. TexStar the lead dev for the project started with a Mandrake spin but it has long outgrown its origins. Anyhow it's worth a look, just to see a very different type of Linux distro.

note: their community made monthly magazine is something to behold. It's like some parish newsletter, somewhat out of place in a modern world. http://pclosmag.com/index.html

Had no idea these guys existed. Thanks for the tip I'll give that a shot when I get home this afternoon!

The kde version is the default, I learnt more in the time I spent running this distro than any other. If you find yourself on their forum, mind your manners. Real hospitable people but it's run by a Texan that doesn't take kind to loud kids. To be honest their forum is half the reason to run the distro.

Chances are I'll fade into the background as I often do, but thanks for the warning nonetheless.

in resource monitor you would see if it tries to sneak win10 update...

which is most likely what it does.

Made a clone of the updated system and upgradeing now just for shit and giggles... 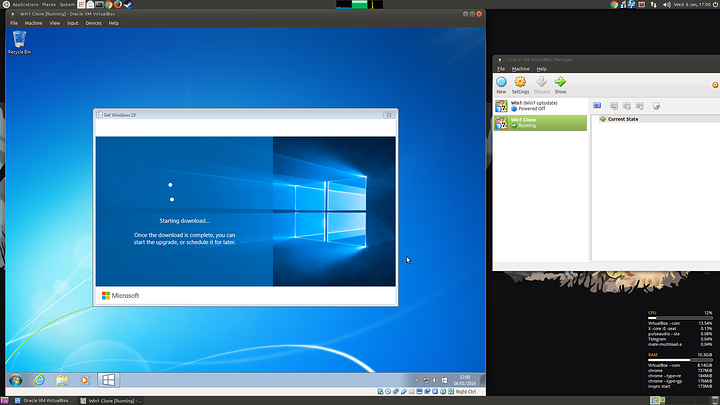 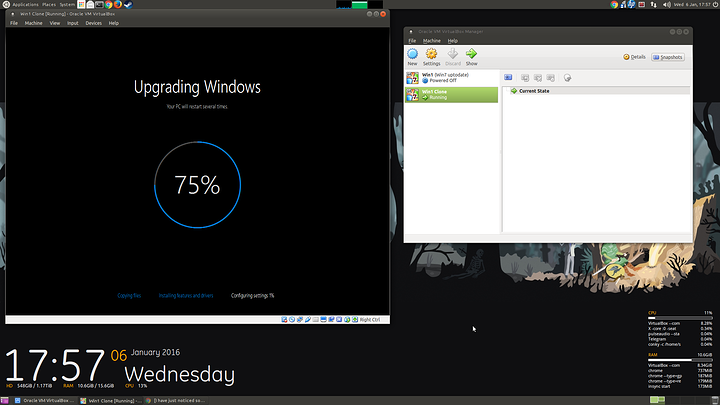 run wireshark, and be amazed.

Watch all those packets be sent to Microsoft.