So I recently got the Kingston SSD Now 300. And it's getting terrible speeds on a fresh Windows 7 Home Premium build. The SSD is the 120GB model.

I live in Canada so what SSD's can you recommend and at a similar price point unless as previously stated there is something I can do to fix this? 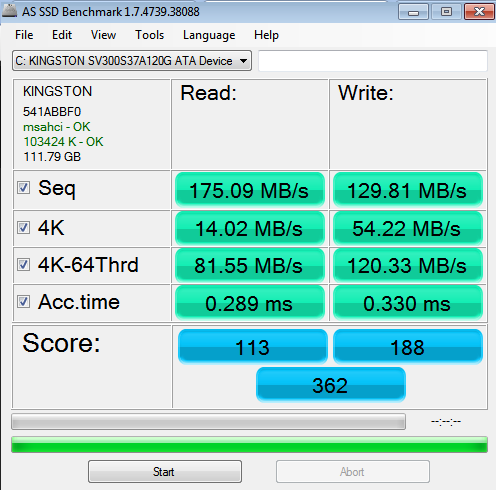 You are running 505A firmware. You have an older GOOD V300. Since then kingston has bait&switched and anything past 505 is running poop-nand. OP is running 541Anand

That's probably from when the Kingston V300s weren't shit. OP's bench is very much in line with their speeds now that they switched to lower quality NAND.

What capacity of SSD are you looking for? My 256GB Crucial MX100 is pretty nice, but I'm not sure how comparable it is in terms of price in Canada. I wouldn't go for a 128GB version since it's slower.

Samsung 840 evo/pro and 850 evo/pro are of course great options. Again, not sure how pricing is.

Edit: Didn't see that it looks like you're looking at 128GB version from the picture of the benchmark.

You can't fix it. If you can return the ssd do that. Kingston sold you a product on bait&switch.

I am looking for a 120 GB SSD for my OS and a few games. I don't want anything crazy. Just similar price point to the Kingsaton SSD

On the box it clearly states; :450MB/s read and 450 MB/s Writer," False advertising much especially considering there are no marks indicating up to this speed or due to in house benchmarks. kek.

I rememeber Logan mentioning in a video that Kingston sent him the V300. I hope he delivers the results sooner or later - would be very interesting. Isn't Kingston slowly but surely replacing the V300 with the "new" HyperX Fury?

yeah nope. Just got myself one of the HyperX Furys and while the read may be at ~317, writes at ~59. Tough, it does say my controller is bad so the a Fury SSD may be fine.

It has always been false advertising. It uses the Sandforce controller. That means it will only see those speeds on compressible data which is a relatively small percentage of what you do day to day. It will never hit those speeds outside of benchmarks. That being said should still be much higher. Damn Kingston.