I got no one to ask about this

So on to my problem i have been struggle now for a few days installing Ubuntu and even Linux mint on to my Dell T5500 with an Xeon E5645 12gb ram and R9 270X. first install takes 3 hours dosent mather if i use live dvd or usb 3.0 or 2.0 anyway when install is complete it restarts as normal but then it turns black.

So i tryed enter grub. wohoo works, first just tryed simple nomodeset, dident work, so i tryed radeon.nomodeset=0 now i got tty1 loggin enterd it total blackscreen and pc shut down, been trying diffrent things but im out of ideas and stuck with just going back to other harddrive with windows on,

Replace the line with this:
GRUB_CMDLINE_LINUX_DEFAULT="quiet splash acpi_osi=Linux acpi_backlight=vendor. but sence i cant make it that far to make it or am i just stupid.

on linux mint install still took 3 hours, system was super dmn slow so i made and attemt to update micro code for cpu and it made it crash and when i booted again it said kernel was broken.

Does Linux (any distro) boot to the desktop correctly on from the USB or CD drive?

I’m wondering if the problem is with your HDD, 3 hours to do an install sounds way too long. I had similar issues with a faulty disk a while back, I was able to get the install to run but then it would always crash on boot. New disk, no more problems.

If you boot from the USB with Ubuntu/MATE you should be able to open applications/accessories/disks then select the volume you plan to install onto. From there you can use the drop down [where the pointer is on the screen shot] on the upper right to check the SMART status of the disk - you can also force a short or long self-test. Look for any error messages. You can also use this tool to benchmark the disk and format it etc. If you format it you can also unmount it and run fsck from a terminal against it. 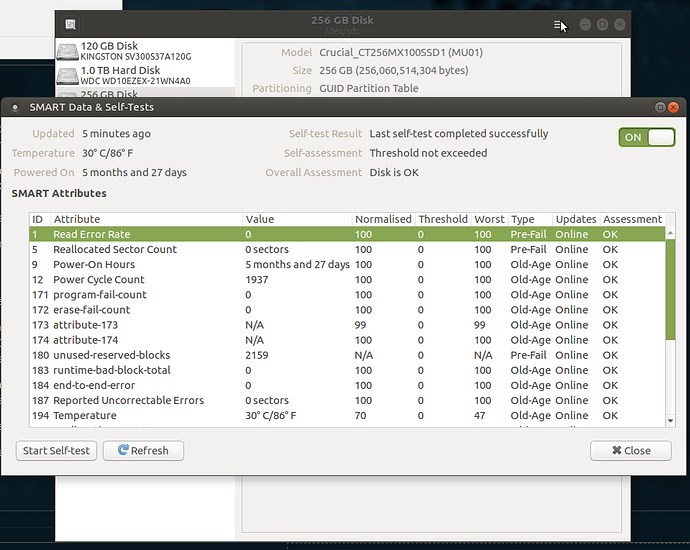 Hey yes forgot to type that did this check at first before i started the install sence this drive had been taken out of my htcp system for ssd change so i made the check before i started install. but im gonna grab another disk and try and se if something changes

You also need to tell us what distro and version you are trying to install.

oh sorry my head is not with me today.

Have you checked that you have the latest BIOS for that system?

yes updated it when i got the system i updated to the latest Bios wich was avalible . dont think it was any newer but im gonna check

Edit : I just checked A16 is latest offical realese on dell website

Thats… Wierd… Have you checked to see if your machine’s mobo is all detected? This might be the one off rare machine that doesn’t work and doesn’t have linux support via mobo hardware.

Follow up Q’s:
Does the desktop run sluggish and slow? Do your cpu(s) run at 100%? Have you tried fedora or opensuse?

i havent tryed any other except windows 10 and 7 and both of those works fine. when i got in to linux mint it was sooooooo slow it was not even fun to be in there. but im gonna try fedora or opensuse, why i havent tryed i beacouse i have little experiance with those.

Nope, stop. Your hardware is doing the same thing that alienware laptops do and I have no clue why. Go look up and see what other people have specifically done about those sort of problems with alienware machines.

I know one problem is not recognizing the southbridge and another is gpu incompatibility but your 270 should be fine.

just to be clear what should i look for then ?

uI’m not really sure? I know that the slugging it is similar to the alienware machines. Dell might have a driver they package that you don’t have?

Do you know how to use IRC? There should be a lot of people in the #archlinux-offtopic channel that can help you with this, though you need to reg a nick.

If you also have a chance, copy journalctl for us and put it on pastebin.com.

in terminal. Then copy paste the holy shit amount of text over to pastebin. The guys on IRC will ask that you do the same.

well irc i know how to use. but the copy part wont happend. i tryed diffrent distros beacouse that one crashed on me when i tryed to update microcode for cpu. and the rest of the distros i have not even got to the point of getting in to being able to run a terminal

I need to update. Went for a new go and I swapped HDD and install went smooth . but it would not still boot so I went in bios changed achi to ata. Thinking why would that change anything and poof now it works. Even the old drive magicly works now. No sluggishness or anything install took 15 min updates works fine everything. … … … This thing for PC is weird

Something is definitely off with that. Usually you get much better performance with ACHI enabled and kind of need it with modern disks etc.

It wouldn’t be the first time I have heard of BIOS options being buggy or something else in the BIOS changing the state of another switch.

Anyhow, glad you have got it working.

Yea I have heard of buggy bios also but this is takes the price. But may by I can finds someone that has done a costume bios to these machines that works better. Anyway thanks for the help to all that has answers on this. Now I might can move on to try make a GPU pass trough on this machine if its worth the hassle