AMD recently released first in the world APU (accelerated processing unit) that has heterogeneous unified memory access or HUMA for short. I am very exited and happy with that, but after surfing the net I find that relatively few people understand what is happening and why A10-8750k could be more powerful than i7-4770.

Did I caught your attention? Do you think that i am insane by even considering that 173$ chip could be more powerful than 312$? What kind of sorcery is it? Let me explain.

Look at graph below. Now back at this paragraph. Did you see how fast graphics cards are getting more powerful? CPUs are sea turtles compared to modern GPUs. 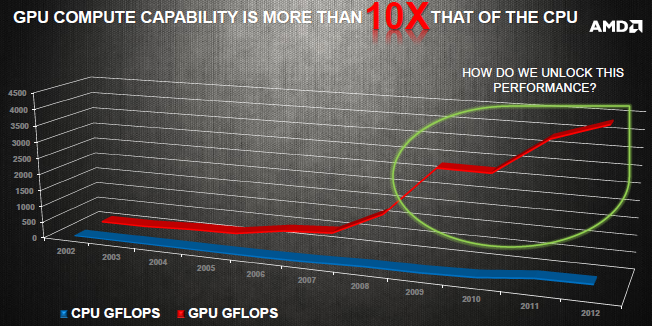 But why nobody use this compute power you might ask. It is hard to move your calculations to GPU. Programmers have to learn how GPU works. Usually write code in low level language. Then in code they have to copy data from system RAM to GPU RAM, perform computation and then copy it back so CPU could continue to work on it. Because of all this copying only few things could be accelerated by GPU. Now look at this nice presentation from Microsoft of what kind of power GPUs have.

While Microsoft and Khronos are working on making easier for developers to write code for GPU, AMD was working on unlocking the true power of cpu+gpu combo. No more unnecessary data copying, no more data restructuring to work on GPU. Every little peace of code could be accelerated by GPU. We could add DSP (digital signal processing), FPGA (field-programmable gate array) or even ARM processor to the same die and make them perform task on the same memory. You might say that all this is nice and dandy, but APU will never beat CPU+GPU combo. You might be right but APU+GPU is the future and it will beat traditional CPU+GPU combo. Of course I am talking about APU with HUMA not that old CPU+GPU on the same die stuff.

HUMA is bleeding edge technology and even now we see 100% improvement in jpeg image decoding compared to only using cpu, 6 times more performance in LibreOffice Calc compared to OpenCL implementation. If you are not exited now then you have no feelings. And about that A10-8750k vs i7-4770 thing. i7 at stock speed has 435 GFLOPS and kaver has 856 GFLOPS.

In Kaveri APUs CPU and GPU are no longer those coworkers that newer see and never talk. Now they work on the same desk. Thats why AMD calling it APU and say it has 12 compute units (4 cores and 8 graphical cores) instead of saying its CPU and GPU on the same die. Its different than what we have seen until now.

These APUs look promising, I have always liked the look of them since launch, although I have an i5 but I would switch to APU given the chance, The fact Fedora will be getting HSA in the next update, and its a bleeding edge distro could cause an abosulute storm for both MS and Intel.

Do you have any information on the Beema line? I would love a laptop with AMD APU inside, do a bit of gaming on the side of any work.

Things look promising and we finally seem to be moving forward, AMD's comeback I suppose, I hope they take over the market or finally give Intel a good run for there money.

Problem is that we don't have SDK yet so only chosen ones can develop for this new technology. Another problem is developer that don't write parallel code. Look at how many games runs better on i5 than on any 6 or more core processors. Thats because intel has best single core performance. Intel`s superior fabs and developers that cant utilize multi core processors is what keep intel in lead.

It looks that AMD inovates faster than industry moves. After year we will need DDR5 and raid 0 high performance SSD to feed that beast, but we will only get DDR4.

No i do not have info on Beema and Mullins line, but i would like to play with mullins supercomputer :D like raspbery pi but much faster.

Now AMD needs to go very aggressive with this new technology and implement it everywhere, before intel jumps on the train and reaps all fruits that AMD's hard work has raised. If they will go full on office programs and linux distros then they could get lots of sales outside USA. Windows xp is no longer supported, Windows 8 is epic fail on desktop and lots of companies have to go with windows 7 and office or stay at unsuported system with huge security holes. And here can AMD come in with APU and linux and say that on our system you can do the same thing as intel+MS but 5 times cheaper. China would defiantly pick cheaper version.

But we have to wait and see how many developers adopt it. AMD has great momentum with consoles, Mantle and video cards that can do more than display pixels on screen.

I really agree with you. I know that this push from AMD is a must... but... at least the first benchmarks say that the cpu part of the APU is still weak (http://www.extremetech.com/computing/174632-amd-kaveri-a10-7850k-and-a8-7600-review-was-it-worth-the-wait-for-the-first-true-heterogeneous-chip/3), and let's be honest, if only few ones can develop under mantle api the number of aplications that benefits the HSA is going to be minimal. If there only few applications that do benefit amd tech there's few reasons to make the change until it's fully implemented (http://www.extremetech.com/computing/174632-amd-kaveri-a10-7850k-and-a8-7600-review-was-it-worth-the-wait-for-the-first-true-heterogeneous-chip/5)... how many years away we are from that? that's the real question.

My only answer is that the longer AMD takes to release a public windows SDK based on mantle, that goes open and free, the more time AMD wil be hurting itself on the bussiness. If hsa doesn't go viral within a year or tow, I'll be only upgrading to a 8320, because in the end what users need is to take advantage in all kind of environment, if only few, it's going to be a niche-oriented hardware part.

In my particular case I do 3d rendering, photogrametric compute, and gaming. HSA could be the biggest kick because the first tow take advantage of Floatin Pont Operations (FLOPS), but really I will love to se how it works with dedicated gpus, maybe pcie 3.0 would really start making sense from now on...

On other thougs... As I understand the bulldozer modules are tow cores that share the FPU (apart from L2, and L3 cache, and other thigns), it would be interesting if we sea an 8 core APU that uses the GPU only as FPU for each core... I think that would be awsome...

Very, very good. I'm excited as well. Can't wait for Kaveri, HUMA and Mantle, coupled with the (still not yet here) 20nm R9 300-series GPUs. Couple that with an Oculus Rift (FullHD with low-persistence LED backlighting, and maybe FreeSync since Oculus could just display 1080p without scaling, same as laptops), TrueAudio, a dedicated sound card (did someone say Mayflower?), some good headphones, and now you have a pretty sweet setup for immersive gaming! Add some motion tracking and gesture recognition, and you've got pretty much the holy grail of immersive gaming.

Now all we need is some other controller to use while playing with Oculus, since we won't be able to use a keyboard with an HMD (head-mounted display). But honestly, with all this promise, it seems like we're heading towards a much more immersive (and epic! did I mention how epic it all seems?) gaming experience.

Next-gen is upon us; but only for the blessed chosen of the PC Master Race. May the Gabe be with you. (And SteamOS when it cometh out of beta.)

Wish AMD would release something, I would love a Beema laptop, put it on fedora and just watch it scream, be x10 faster than any intel product due to HSA, adding mantle into the mix also, linux gaming would take a whole new form, and I am sure new value game (HL3?) will take advantage as gabe aint dumb, And with that replacing DX (Dying tech) lets say this, I wouldnt be surprised if there was a AMD APU Steam machine around the corner.

I do agree in less fortunate countries like china (tech/money wise) these would set off, Ubuntu is already widely used over there.

And what AMD needs to do is put HSA into there operton processors, bring an 8 core with slightly less draw and all these new technologies and again it would screen, more so if your using something like VM or Hadoop.

Lets hope AMD dont screw up there rebirth chance, the market is stale atm and we need someone to take intels crown.

It is already here, HSA has brought something that will crush Intel in the cheap platform market, SteamOS as well, which means better performing games thank to the performance enhancements in the kernel and you can kiss windows good bye.

Now if only we can get Office and Adobe here.. Oh wait we can and dont need tooo... sooner adobe and there crap tech (Flash player, Acrobat etc) dies security is safe ;)

Couple things... (not directed at anyone in particular, just some thoughts)

It's not about the IPC anymore (still important, don't get me wrong). We need to move away from that mentality. It's about optimization and taking advantage of something that works far better and implementing it. The implementation of anything as drastic as this will take time. AMD has a lot of industry backup and support. I really don't think this will flop or go away. I'm no expert by any means, but I truly believe this is the future of computing.

We've got LibreOffice, which can do almost as much and it's free and open-source. As for Adobe Flash, and Adobe Acrobat, we've got plenty of free or otherwise open-source PDF readers (many of them embedded in browsers directly or via third-party plug-ins)m and Flash Player can die in a pit of angry chihuahuas, since we've got HTML 5.0 coming soon and WebGL can do everything Adobe Flash can (and better that it can, too).

So Windows can be replaced. Now if only we can get more of the game collection on Steam to be ported onto Linux, I'll be migrating and telling Windows to find it's next soul mate: Altavista, AOL and MySpace, which is where Windows will soon be once there's more software, games and better drivers for Linux.

It is the future of computing, but lets hope Intel does not steal AMDs thunder, Its about time they had some success in the market, I am really looking forward to the APUs, but remember Intel has a new CPU out this, I believe this year is TOC.

A very well layed out article. I would raise some points, but my brain is quite tired as of right now.

Libre can do most of the stuff the average person does in Office. But on total features, for people that need them, it isn't even close. However 'most' people don't even need Libre, Google Docs will so, via the browser.

I want to side with AMD, but the only GPU-accelerated products I have ever worked with use CUDA.

There are only a very few things I need to do in Microsoft Word that I can't do in LibreOffice. Many of them are related to professional-looking books, in terms of obscure formatting features.

For what most people use and need, LibreOffice has 99.99% of the features average users need. GoogleDocs has many features, but it's nowhere near good enough to compete with LibreOffice, although a web version of LibreOffice would be epic!

CUDA came before OpenCL so it has more supporting software and libraries. Also Nvidia did good job in marketing it, but OpenCL is catching up and gtx 600 series cards have lover performance compared GCN architecture. I am talking about general computing not performance in games.