I have this old HP Proliant ML150 G6. I got it secondhand for what at the time must have been around $40. It was used as a small email server.

I stuck some drives in it and used it mostly as a file server. It’s been working 100% for about 4-5 years now, but yesterday we have a pretty extreme heatwave down here in sunny South Africa.

I shut the server down early morning already before I went to work as I knew it was going to be stupid hot later in the day. So it was off all day.

Last night I wanted to turn it on again, but it came up with a fan failure error and then automatically shut down. I opened it up and the fan that failed is the front fan. The big fan at the back is still working fine. I did try testing the smaller fan in the other fan header to check if it’s not the header, but the headers work fine. The fan is dead.

However, after some internet searching, it seems you can’t get past this?? It must have both fans working as both of them are considered Primary and thus required. So my whole machine is now useless because there is not a working fan in that header.

I was able to move the drives over to an old quad core desktop. So at least my file “server” is up and running.

My enterprise knowledge is quite lacking. I’m hoping someone here might know how I can get it to boot with only one Primary fan.

If you can get to the BIOS, maybe see if there is a fan check that can be disabled?

F10 on boot at HP logo to get to BIOS on a Proliant. Then try to disable the fan like suggested. And if that doesn’t work try disabling secure boot.

Sorry for only getting to this now. Just tried to get to the BIOS, but it’s not having it. It seems to not care about anything I do. It would show the amount of ram, the cpu, then update the fan curve aaaannnnd… then complain about the fan failure and auto shutdown 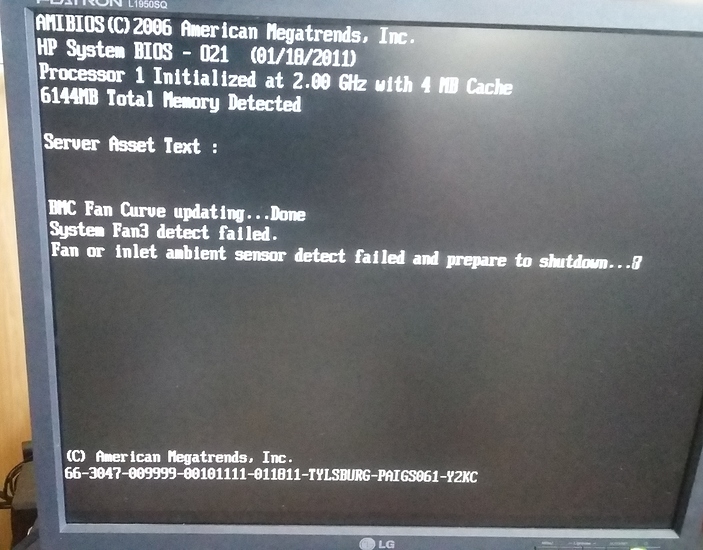 Side note: Just noticed the 8 and 7 is displaying at the same time when I took the image… good old 8ms response time in action right there. And no, I’m not using a 12 year old screen as my main screen.

just swapping a fan wont help as the prolient systems case fans had a sensor incorporated in them
you could probably still get them form hp
If I remember correctly there were 2 types of sensors!
a thermal sensor, (looks like a small ceramic disc cap colored green) or hall effect sensor
side note some dell case fans also were equipped with the sensors.

OK… so… I’ve done some stuff and got it working. First thing I did was dig out an old 0.70 A rated 4 pin fan. I was able to hold the fan pin against the primary fan header and power the fan. The system would then not detect any fan failures and would pass the health check. However, after shutting down the system I checked this small fan for heat and it was getting a little warm. Clearly this fan will not be able to run for any decent amount of time before failing.

However, if I hold the pin to one of the secondary headers (brown) the fan speed would come down and I’m fairly sure that it can run on a secondary header with no issues.

So… then I decided to see if I can fool the tin brain into believing there is a fan in header 3 buy connecting pin 3 to the other primary header’s pin 3. The other header has a fan that is working and sure enough that does fool the tin brain and the system will pass the health check. What you see in the images was just for testing. I don’t intend on running it like this. 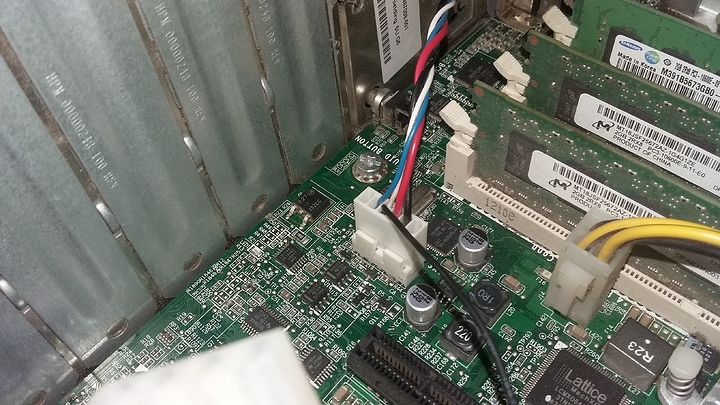 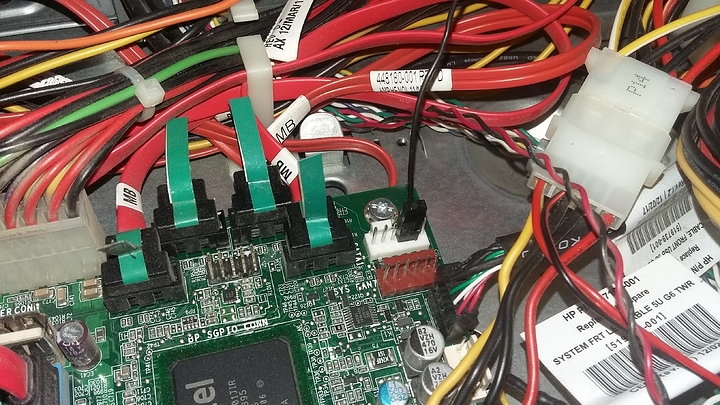 Now the question is, what fan can I get that can take it if connected to that header. The old fan is rated at 12V and 3.24A. They are pretty expensive, but I’m hoping I can find something power enough to act as a replacement.

What I can do is run this cheaper fan on a secondary header and then make a more permanent solution to fool the tin brain into thinking there is a fan in primary header 3.

If you were to take a multimeter to hand, it should be possible to figure out the pinout, then you could build an adapter to hook up any fan.
Maybe there is a need to connect +12V to a presence pin or so. Will look for datasheets.

For the moment, nice workarround.

Find a manual on your server. Normally, there should be specifications on the fan’s pinout, and one of them should be the pin where it provides some sort of signalling for the BIOS that shows the fan speed info and such.

I wonder if the slight warmth coming from your 4-pin fan while it was plugged into the primary header could be some over-volt or over-current due to incorrect connection?

I already know which pin signals the tin brain. It’s pin 3 as seen in the images. It’s just, finding a fan that can handle what the server outputs is the tricky part.

I can make my temp solution a more permanent solution and not bother with another fan. The machine never does any real work. It’s just for file storage and backups. I used it because I could fit 6 drives in it.

I’m thinking though that maybe it’s time I look into a new, less power hungry solution for my file storage and backups. Will see…

A post was split to a new topic: Where to find HP ProLiant BIOS

Thank you very much " Nic_s " . Very helpful you details for me.