How to Swap Your OS to Another Hard Drive?

Ok, so I'm going to buy a couple SSD's for my rig, seeing as I've only got a single 1TB drive in there. One will be for the Operating System and other programs, another will be for games that I want faster load times on. Thus, leaving the 1TB hard drive for media pictures, smaller games, etc.

So, here's my question. How do I go about swapping my OS to another hard drive?

I was thinking I could just install Windows 10 to one of the SSD's, activate it, then delete the OS partition on my original drive. Is there a better way to do this? Any advice would be appreciated.

So just do a clean install on the new drive, then delete the old OS partition on the original drive? Anything else that I should be aware of? Is Microsoft gonna c***block me from activating 2 operating systems on 2 different drives with the same key?

Cause I don't wanna delete the original OS partition until I'm sure I've got everything working as intended.

Is it a custom build or an OEM PC?

If you can resize the partitions so they dont take up more space than available on the SSD, you can allways just clone it, clonezilla works wonders for this, albeit MS sometimes lays a few booby traps but clonezilla seems to handle it.
There are other windows based cloners, not sure how effecient they are since your cloning your boot drive.

I'd take the original drive out of the system when you do the fresh install on the SSD just to make sure you don't accidentally install the boot stuff to the wrong disk.

@Lauritzen are there any advantages to cloning the drive as opposed to just installing and activating Windows 10 on another drive?

@Dexter_Kane I had planned on doing that. I have seen stories of people on forums screwing their Windows partitions up when they tried installing Linux on separate drive.

If you can resize the partitions so they dont take up more space than available on the SSD, you can allways just clone it, clonezilla works wonders for this, albeit MS sometimes lays a few booby traps but clonezilla seems to handle it.
There are other windows based cloners, not sure how effecient they are since your cloning your boot drive.

What is the size of your original OS partition?

Seriously, IDK why everyone is so afraid to clone their shit. I've been doing it for years. You can clone pretty much as long as the processor + mobo/chipset is the same. Otherwise you have driver issues. I cloned my last install at least three times, this install has probably been like four times. No issues. The only thing you need is for the SSD to recognize, and uh, windows typically recognizes new device soooo

FYI
If its Win10 the key typically is encoded to hardware, otherwise you have to reenter it. You can just skip the enter step in install, and it will auto activate with updating (if the coa is encoded).

Not really, saves some time reinstalling/downloading and patching windows, but essentially the same, give and take a days worth of hairpulling frustrating M$ spam with updates blabla. reboot messages.
Basically you're just left with your old OS installation on your new drive.
In some cases a fresh dainty new installation is the best choice, windows has a habit of becomming horribly bloated after some time running.

Not sure about Windows tho
Linux doesn't care it'll boot on anything, just mind the correct video drivers

actually... now that I think about it, I don't think I actually made a partition for my OS when I originally built my PC. 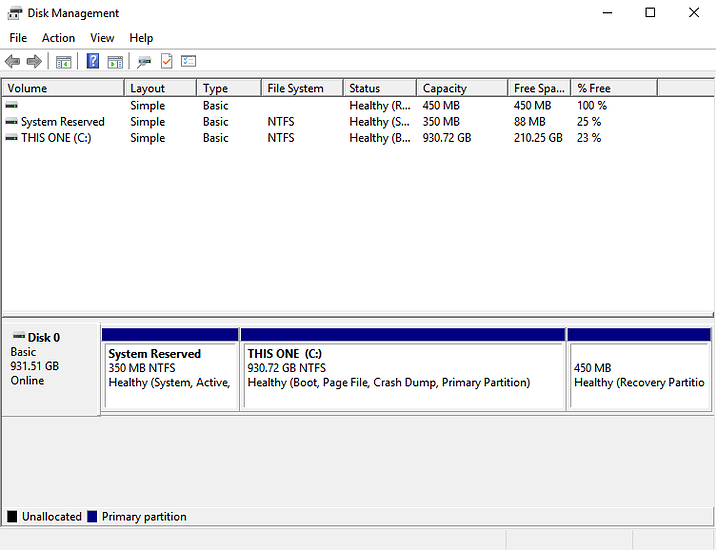 Damn my ignorance. Was just a noob when I originally installed windows 8 back in the day...

At this point, I'm thinking of just freshly installing Windows on the new drive. Then, back up pictures, videos, etc. on the second SSD. And then completely wiping the 1TB clean. That will give me a nice clean start.

Dude your 'THIS ONE' is the OS lol
You can probably do it if you have free space in that partition
Otherwise uninstall some stuff and make the space
make your partition smaller and clone it, as well as the 'system reserved'
you don't need the recovery part but should probably do that too

Good idea. I was a bit surprised there wasn't a guide already. Then again, it's not necessarily a hard thing to do anyway.

You should have seen my original partitions, lol.
I had installed Ubuntu until I could afford a Windows key. When I installed Windows, I just made a separate partition for it, thus dividing the hard drive in half. I later deleted the Ubuntu partition and used a third party application to combine the two partitions back together. I think the reasoning behind the name 'THIS ONE' was so I didn't accidentally delete the wrong partition.

Being completely brand new to PC building just a couple years ago, it's a miracle I didn't screw something up by doing all of that.