How many of you believe in spirits, or out of body experiences?

Ah yes, Matt Dillihunty. I'm very familiar with him and his material. I'm also a Christian apologist and have been debating with many people just like Matt (atheists etc.) for many years now.

In order for me to properly respond to this, we'd have to get into a whole epistemological discussion that would take us WAY off-topic. But, if you'd like to get into it, feel free to send me a PM. :)

Iron Chariots is intended to provide information on apologetics and counter-apologetics. We'll be collecting common arguments and providing responses, information and resources to help counter the glut of misinformation and poor arguments which masquerade as evidence for religious claims.
The complexity of issues surrounding religion ensures that any proper assessment requires us to delve into a number of philosophical, historical and sociological topics. Our ultimate goal is to provide a robust and definitive resource for:
1-atheists seeking responses to common apologetic arguments
2-theists who are questioning the efficacy of their beliefs
3-apologists who feel that their "pet" argument is above reproach
4-individuals of any philosophical ideal who have an interest in religious studies

How do you feel about the work of scholars such as John M. Allegro?

I have tried some of the most potent natural psychedelics in the world and to me there is little doubt from where religion came. Add to this thousands of years of Chinese whispering from that moment on and you end up with formalized/organized religion.

To me it is obvious that Christian leaders knew this as far as to the middle ages. Psilocybe and Amanita Muscaria is very common in Christian artwork from before and up until the middle ages and is commonly found in churches and cathedrals. I saw a woodcut in a church in Bremen/Germany where a Psilocybe mushroom grew out of the holy chalice. In the same series of woodcuts was also Moses depicted with horns which was also very common back then. A famous statue in the Vatican depict him with horns too, hinting at the fact that the leaders knew he was a lunar deity before he was incorporated into what later became Judaism, Christianity and Islam respectively as a prophet of these belief systems.

I agree, nobody should support any kind of criminal organisation. Don't know where you even got the idea from that I do...

I'm not familiar with his work.

But I will say this, as I said in my previous reply; If it does not conform with Biblical truth, than it is not true.

So all those depictions of Moses with horns and mushrooms growing from holy items are meaningless apart from causing people to question the truth and draw people away from God.

What those woodcut's demonstrate is that someone within the church knew something they are not telling the people they sell faith to. If it was a fluke woodcut I would question it, but psychedelic mushrooms is very common in Jewish and Christian imagery of the era. I just don't understand why so many people want to rely on a closed loop circular logic because it itself is a product of interpretation. So it is not really that the bible is infallible that is at the core of your belief, if is the absolutely faith in those who interpreted it to be. When Moses is commonly depicted with horns and hippie mushrooms are found all over the place, in art from within the church itself, how can it be meaningless? Simply because it does not conform to the interpretation that you subscribe to?

I would be a lot more open to the idea of absolute truths if the result of those truths were absolute community. But christianity itself spans from fire and brimstone crowds like the westboro baptist church to hippie like communes and all of them insist they have the absolute biblical truth and be all end all interpretation and that the others do not. Which is a "no true Scotsman fallacy".

Most the christians that I know that are into science tend to beleive that it is extremely unlikely that we are alone in this large of a universe when it come to aliens and that it is unlikely that god would only make this one planet with life out of all the planets and stars that exsist.

With all that we don't know about ourselves and the universe I rule nothing out. I personally see all of the universe as a giant living thing, a living thing thats quiet a bit different that what we consider life to be. Kind of like how a body is made up of different cells and bacteria and other organisms. Might be easier to understand where I am coming from with something like a crab that has a shell that is no longer alive with barnacles living on it and worms crawling around in its shell keeping it clean or feeding off of it. Yup, crabs are pretty discusting, to bad they taste good.

When I was little, maybe 5 or 6, I was lying on the sofa waiting to watch a film with my mum. TV was off and I was doing nothing. The best way I can describe this thing is an outline of a person. It was like a 3D shadow, but whatever way it faced, it was always an outline. Anyway, it walked towards me, around the coffee table, from the living room door. I put my head under a blanket and when I took my head out there was nothing there.

It definitely wasn't a dream. I remember watching the movie and everything. I've never been able to understand what happened. The room was completely still and there were no stimulants. I can't comprehend how my mind could create something so real.

I've had a few conversations with friends about the subject and they've also had some weird experiences. One of them has had really weird stuff happen when they used a ouija board, stuff that couldn't be coincidence, and another whose little sister was legitimately terrified at seeing her dad standing in the room they were in (Their dad had died a few months beforehand and my friend said there was nothing there).

That's the thing. Stimulants does nothing on their own. They mess with our brain and nerves signalling internal systems. It has been discovered that it can be triggered by a lot of external things like certain vibration frequencies, infrasound etc. 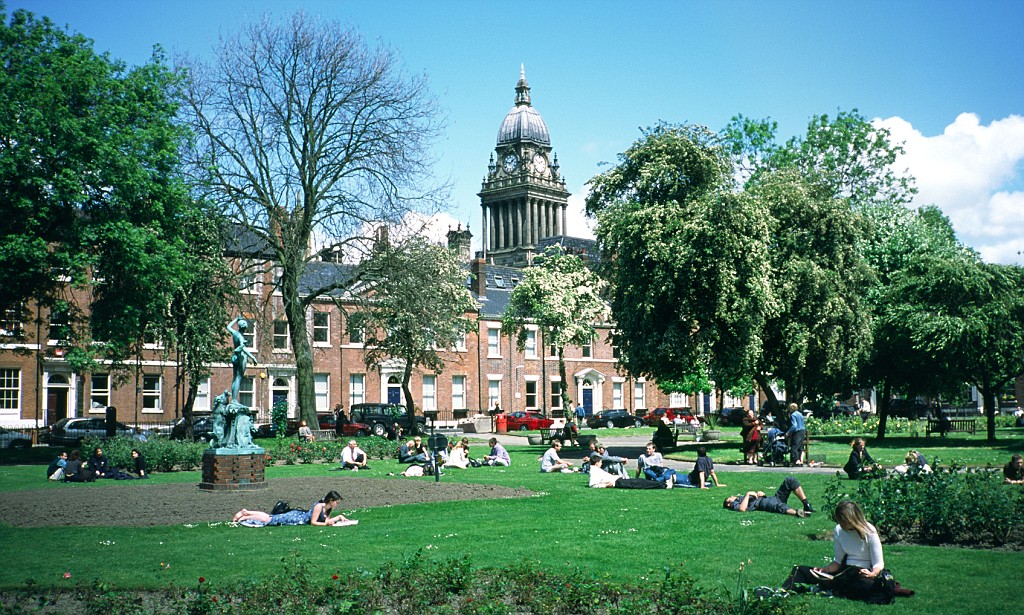 Scientists have been left baffled because they can’t figure out what causes the the low humming noise, or why it affects so few people. People in areas as diverse as Leeds (pictured) and Sydney have heard it.

Researchers have been able to give people religious experiences or believe they were watched by a ghost simply by the use of inaudible sound. So to say that there were no stimulants...well, maybe there were.

I'm not the one to talk about this subject, as a large proportion of the population don't accept that there is anything past this physical world. I personally believe in spirits and life after death (though IMHO it 'should' be life after life.) Science will always need proof and if that proof isn't there, then its seen as untrue or false. There are some things that can't be proven. But just because that is the case, doesn't mean its not real.

How many fakers need to be humiliated to people stop believing in superstition .Who ever thinks they are psychic Randy foundation offers 1 million dollars for many years now .

If they eat me can I leave work early?

They stopped offering the price and now spend the money on community work, with the blessing of the guy who granted the money to begin with. Too much time wasted on crackpots and quacks for anyone to maintain their sanity. The worst part was that some of these people are genuine believers in their own powers and since the large majority are not frauds, in the sense that they cheat others out of money, it became too heartbreaking too. Randi was out to get the people who cheated people out of money with simple magicians tricks. He had no intention of hurting well meaning crackpots because even if him and his crew demonstrated without doubt that the person in question did not have the power they claimed, all they accomplished was to break some ones heart and the person would go home and just think they had a bad day anyway and this was why their "powers" failed them. Or because the test was too stressful or whatever. It accomplished nothing, because the real frauds, the people who make million on cheating others, they never submitted to the test anyway.

When I was little, maybe 5 or 6, I was lying on the sofa waiting to watch a film with my mum. TV was off and I was doing nothing. The best way I can describe this thing is an outline of a person. It was like a 3D shadow, but whatever way it faced, it was always an outline. Anyway, it walked towards me, around the coffee table, from the living room door. I put my head under a blanket and when I took my head out there was nothing there.

When I was a kid we lived in the country so all day I would be out wandering the forest.One time me and my mate found these huge toad stools and we where sitting on them and kicking them basicly running a muck. When I went home I went to wash my hands and the saw maggots crawl up my arms then borrow under my skin then travel up viens in my arms.

Wasnt till I was an adult I realised I was tripping out .

Didn't you feel sick before the hallucinations started?

Nope I didnt worry much about the maggots crawling up my veins. My mom always drummed into me to be brave so if it didn't kill me I was fine. Going back to my old post when I drowned I went home and then to bed....My mom woke me up asking why I was breathing weird. When I said I drowned she frecked out.

Thats why I keep my mouth shut.

I mean physically ill. The toad stool contains ibotenic acid, which is a neurotoxic metabolite and pro drug to Muscimol, which is the psychoactive substance in the mushroom. Our metabolism turns the ibotenic acid into muscimol and this process makes you feel very sick. Nausea and projectile vomiting is common, which is why most people who enjoy the mushroom either heats it up or dries it, which accomplishes the same. Lap shamans are said to drink reindeer pee because the animals ate the mushroom and muscimol passes though the body intact. Don't tell me how they found out, but other people who wanted the experience would then drink the shamans pee, or the shaman would eat the mushroom raw and take one for the team. Also the psychoactive experience from muscimol at dosages where it causes hallucinations usually last 6-12 hours.

Growling I was a kid, I didnt care.

I wish you could remember more. Because it is assumed that ibotenic acid can be absorbed through the skin. it would be interesting if that somehow bypassed the illness, maybe because ibotenic acid is hard on the stomach. Which it is. Vax on....drop out. lol.