How many fans per header?

Hi Guys, I’ve got a monster PC that I inherited from a friend a few years ago. He used it for gaming, I think, and so he installed a lot of fans on it. Altogether there are seven fans on the system. The trouble then being that there are only four fan headers on the motherboard (3 + 1 for the CPU). So three of the fans have to be connected to the main power supply, which means (I suppose?) that they are going round at full speed. Full speed is (a) very noisy, and (b) probably not really necessary for me, since I’m not a gamer.

So, as part of my late-lockdown PC awareness campaign, I just ordered a few of these fan splitter cables. Seven fans - so the idea is to leave the CPU fan on its own, and split the other six with two on each header, giving me proper control over each fan on the system. HOWEVER, I looked at a couple of YouTube videos about using splitter cables, and one of them was saying that you need to be careful not to fry your motherboard by overloading the headers. So I guess I would like to know how safe it will be to do this. Here’s the manual for my MB, GA-Z77P-D3, and on page 23 there’s some limited information about the voltage: 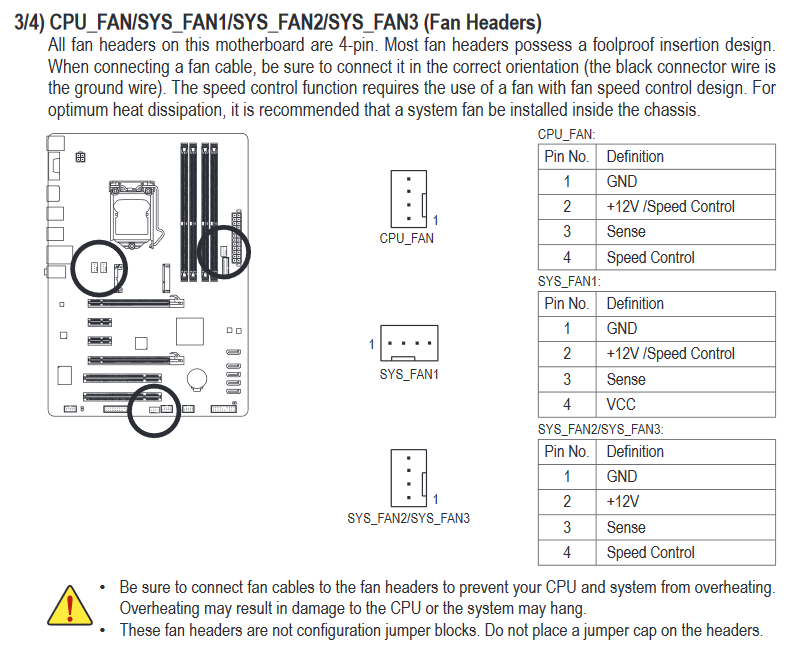 But of course because I “inherited” this machine I don’t have any idea about how much power the fans are taking. As far as I can see, they all look pretty much the same regulation size (120 mm?).

So the question is whether it’s safe to have two of each of these on each header??? Thanks very much

he installed a lot of fans on it. Altogether there are seven fans

Oh, my deer friend, this is not a lot of fans at all. My previous system had a total of 11 fans.

So the question is whether it’s safe to have two of each of these on each header??? Thanks very much

You already ordered the splitters, yes? 2 fans at lower speeds on those older boards should be about below zero issues. 2 fans at max speed may not be a great idea, depending on the fans themselves. Some fans really don’t eat a lot of power, while others can be quite powerhungry…
Here is my other question: do you by any chance have an optical bay on your case, that you do not use?
Check out NZXT sentry for something super simple to use. No software, no bulshit.
You can check one of those PWM fanhubs, that have their own power and only take the PWM signal from a single fan header and control a bunch of fans…
Also, keep in mind your CPU header is the most powerful fan header on the entire board. Nowadays all of them can support a bunch of fans, but back then the CPU fanheader was the most powerful in case you have a multiple fan cooler (there were dual tower triple fan coolers back in the day)…
But honestly, 2 fans per header should not cause any issues.

Hi, and thanks for replying so soon (like I keep saying, this forum is amazing). Yes, I already ordered the splitters. No big deal, as they cost next to nothing, but of course a bit silly if I wasted the money. It was an impulse, as the noise was really annoying me!

do you by any chance have an optical bay on your case, that you do not use?

I’ll have a look inside a bit later, and another quick look at how many settings there are for the fans in the BIOS, but for sure there’s no reason for me to need/want to set the fans at full speed, like I said.

Check out NZXT sentry for something super simple to use. No software, no bulshit.

Do those just plug into one of the PCI slots? It doesn’t look like it, as they have some graphical interface (and I don’t know where that would fit on my case). I guess I would get one of those when I finally get around to building my own monster PC (ah ah ah one of these days!)

Ah, hold on!!! You mean that the NZXT thing goes in the optical slot??? Sorry, I didn’t make the connection.

Yes, I do have an extra one of those!!! That would be quite nice, in fact.

Is this one the right kind of thing? And do they generally last a reasonably long time, so that I’ll be able to transfer it to a future build?

look on the back of your fan where the air comes out, it’ll have a sticker which will tell you the amp rating
for example if its 0.125a, you could theoreatically have 8 of them off one standard 1amp connector, pump connectors are usually 2 or 3 amps but not always

There’s not enough information to tell you if this will work.

Generally 2 is ok. 3 is usually pushing it. There no info here about what fan you’re hooking up to them, and no info about the current capability of the header. There’s a real chance you’ll burn those headers out.

Well, you know what - I’m going to get that optical bay fan controller. True that I’ve splashed a bit of cash recently on this PC, but that looks well worth it!

I’ll have a look inside

Oh, you sweet beautiful boy, you are so lost

Ah, hold on!!! You mean that the NZXT thing goes in the optical slot???

Ah, you found yourself

Is this one the right kind of thing? And do they generally last a reasonably long time, so that I’ll be able to transfer it to a future build?

Yeah, but I was talking about a mechanical one without display, like this one: 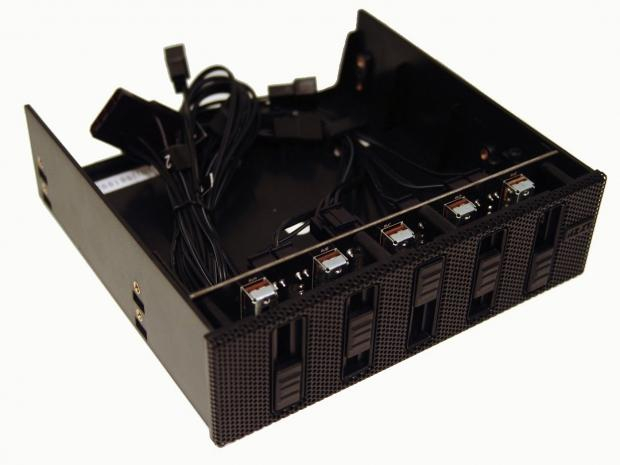 But there is pretty large variety of optical bay controllers.
You can also get one of those: 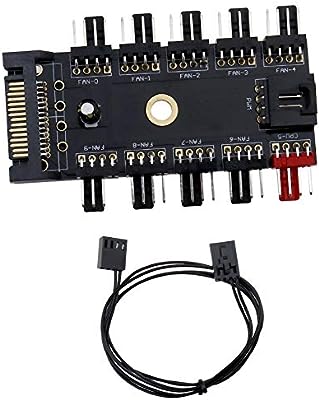 
Up to 10 fans, it uses SATA power so it doesn’t really push any of your fan headers. It literally uses the PWM signal of one fan and controlls all the rest using the SATA power.
There are also weird stuff like that: 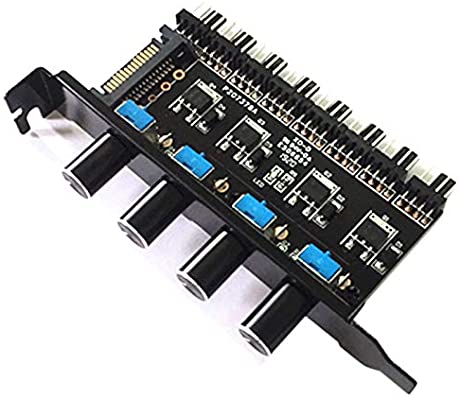 
But honestly this creates more mess than any of the other options unless you are a cable management wizard…
Melcar September 6, 2020, 3:06pm #9

As a general rule you don’t go over 1A on a single fan header. Many modern boards now have headers that can take up to 2A. Usually they have those labeled in the manual. The fans have their power ratings on the sticker in their hub. Some high powered fans can take up to 0.5A but most normal fans should be in the 0.1A to 0.2A. Careful, because this is usually NOT the startup amperage.
Still, try not to daisy chain more than three fans on a single header, specially if you plan to control them. If these are PWM fans, the PWM signal may start losing strength if you pair too many fans on one header. If you try to control them with voltage, you may burn out the fan splitter or even damage the fans. A powered fan hub is the preferred method to use when connecting several fans to a single header.

So the question is whether it’s safe to have two of each of these on each header?

Probably.
Look at the back of the fans you ordered. There will be a current draw (or power) listed. Add that together. When the total Amps are below 1 (or 12W), you are good.

Some high powered fans can take up to 0.5A but most normal fans should be in the 0.1A to 0.2A. Careful, because this is usually NOT the startup amperage.

I have a 12W fan (not in my computer, but as solder fume extractor), you do not want that much power in a computer you share a room with.
For reference:

Yeah, but I was talking about a mechanical one without display, like this one:

OK. that mechanical one looks sensible like a good solid pair of shoes, but like I said, I just went for it with that more flashy-looking graphical gismo that I linked to. Only £30, so whatever. Let’s see how long it lasts. Do I take it that I can use one or two of the splitter cables with this? I won’t be overloading its capacity, will I? (I’m assuming not)

Do I take it that I can use one or two of the splitter cables with this?

I would say read the manual if it have one, but my initial idea was all the fans from the controller and the rest - from the motherboard.
My guess is you can still split 1 header for 2 fans, but still I would make sure it doesn’t overpower it.
My Fractal Design fan controller have explicit 3W total power before it dies, no matter 1 or 10 fans, total power of 3W…

I won’t be overloading its capacity, will I? (I’m assuming not)

My guess is not as well, since I expect those to have protections and stuff, but make sure you check the manual if it have one…

Well, it doesn’t really matter anyway. I’m going to have seven fans and nine ports, so I suppose I was only asking purely theoretically (although true that I was also thinking about making some actual use of those splitter cables, having bought them). Thanks very much for the help! I hope that this thing installs easily (that is, I hope it fits properly in the slot like it’s supposed to!)

one PWM connector can support 2A, so depending on the fans you have 4-8 fans per connector, please use the same kind of fans on each connector, mixing fans on one connector is never a good idea.

Some high powered fans can take up to 0.5A

Actually fans can go up to 48W, but anything above 0.3A is made for industry use and even most Delta fans don’t reach 1A.

one PWM connector can support 2A

Do you have a source for that? just because the connector can doesnt mean the board will. many boards are known to put out 1 amp max and some even less.

even most Delta fans don’t reach 1A.

DeltaElectronics has everything from 380W to 240mW

Actually fans can go up to 48W

That is just, uh, your opinion man. ← link

one PWM connector can support 2A

depending on the fans you have 4-8 fans per connector

Check the stickers on your fans. They will almost always have something akin to “12v0.15A” or something to indicate voltage and amerage. Most fanheaders I’ve seen have a limit of 1A. I’d personally limit the max amperage of all fans per header to 0.7A (usually enough for 3-4 fans).

Hey Everyone. Thanks very much for all the replies, but you can stop now! I bought one of those optical bay fan controllers, as suggested (not the precise one suggested, but hopefully that doesn’t matter), and I’ll be fine I guess. And so no need to keep posting. I’ll make sure to have a look at the stickers on the fans anyway, just for my education in all this. Thanks again

you can stop now!

Honestly, this is not your thread anymore. Your question is answered, your thread is finished. This is, the way I see it, turning into more of a general discussion thread about fan headers and stuff like that.