Sounds interesting, but uploading your own music seems kinda fishy? Legally speaking…
There was also Grooveshark that did something similar (just that it wasn’t distributed) and they got sued into oblivion…

It’s all local so it’s perfectly legal. Not sure on the legality of sharing it with other people but you aren’t obliged to.

Well yeah local if you set up your own “pod” as they call it. But the website makes it sound like you just upload your stuff willy nilly

You host your own instance on your own computer. Your music never leaves your own hardware.

I’ve pretty much moved to Spotify for all of my music at this point. I used to encode my music library as 384Kbps AAC from FLAC files because I’m a sucker for the placebo effect, and I can’t complain about Spotify’s quality.

There are a few albums I like that aren’t in the UK library for what I presume are licencing reasons (Deadmau5 While(1<2), for example). For those, I just stream my music library with Plex from my NAS. I have my old Foobar2K portable in a folder in my music library, so I can listen that way on any PC on my network.

I have specifdc albums in flac (sunny day real estate, toms story, gorrillaz, others) that I keep either on a laptop or phone that then goes to headphones, or my PA system in my room.

After the Switch to Linux I haven’t found an apt replacement for Foobar2000 yet,

I haved used winamp for the longest time back then. It was great with all the plugins and my collection died since going into post-grad school and further training. 2 years ago before jumping to linux, someone recommended foobar2000 for windows and while it works, I really could not see its appeal.

Please educate me why was foobar all the rage again, say compared to Winamp (over on windows) and lets say audacious over on lInux?

Please educate me why was foobar all the rage again, say compared to Winamp (over on windows) and lets say audacious over on lInux?

Don’t think I tried Audacious yet, I might tho.
But as for why it was “the rage”, well for one thing it was started by a Winamp Dev and for another it is extremely customizable.
When you first install it, the interface is literal

, it doesn’t show anything IMO. But once you scrap that you can build the interface from scratch. There’s also the ColmnUI as an alternative interface, and you can also build skins like Winamp used to have.

If you’re looking for any kind of functionality in a music player, Foobar probably has a plugin ff or it. One thing that annoys me a bit about that though is that, while the website has a components section, by no means are there all the plugins in one place. A lot of it is just on random sites on the internet, which is a bit annoying.

Also supposedly the decoder is “the most audiophile there is”, which I have no idea how anyone determines that…

Well and the other part is just being used to it, I don’t deal well with change in those things so I just continued using it.

I use MusicBee on Windows to manage my library and sync my phone over a USB cable. MB does automatic replaygain calculation on import, has a good tag editor (and can auto-tag from gracenote or whatever), and keeps all my files organized and named correctly on filesystem.

On Linux, I’ve recently discovered Lollypop. Its featureset is pretty minimal, but the album view is all I ever wanted from a media player. I used to use Quod Libet; it has a lot of plugins but most of them are broken, and the selection/queue system is wack. My system is dual-booted, so both OS’s read off the same shared HDD. It’s a pretty jank setup, and I don’t like that I still rely on Windows, but you just can’t beat MusicBee.

DeaDBeeF is a pretty great option for Linux if you use a lot of playlists or have a small library. I respect it for being super-minimal and rock solid, but I can’t put up with having every track in my library in one giant list. I can’t find an album without using the search.

On Android, I used to use foobar2000 but I’ve recently switched over to Poweramp, mostly for the much-nicer UI, although I still miss a few features (especially crossfeed). I don’t have a dedicated audio device, but I bought a slightly-upmarket dongle from China. It sounds better than I remember my V20 sounding back in the day, and I keep it connected to my IEMs permanently.

Found tablets to be acceptable.

Right now I am rocking for under 200 dollars octocore 1.8 with 4 gigs of ram 64 gigs of onboard storage that can be expanded to 256 gigs. I have yet to run it so long that I killed the battery, yet. That is including BT .

Handles 1920x1200 with audio reprocessing with viper well so far.

I do have a creative zen

I reprocess on the fly… I would kill a phone battery quick.

I need that reprocess as music collection spans a few decades at least.

Ah, I see you too are a garbage collector man of culture.

Do you have a minute to talk about our lord and saviour rockbox?

I am always gonna have a tablet with me anyway. The digital mp3 players / ect where neat at the time but …

For me at least … it is all about what you need and what you are stacking on top of media player it self.

Old straight forward stack would be something like http://www.xionplayer.com/ with https://sourceforge.net/projects/equalizerapo/ for windows. Instead of using equalizerapo you might use Viperforwindows.

While I ramble on this subject …Viper4 android/windows can go a long ways in shoring up some of the audio ills in BT. Right I am playing with BT 5.0. I am growing kind of fond of the multi-device connections.

Audacious sounds amazing IMO. It also loads my library from my NAS in 10s. 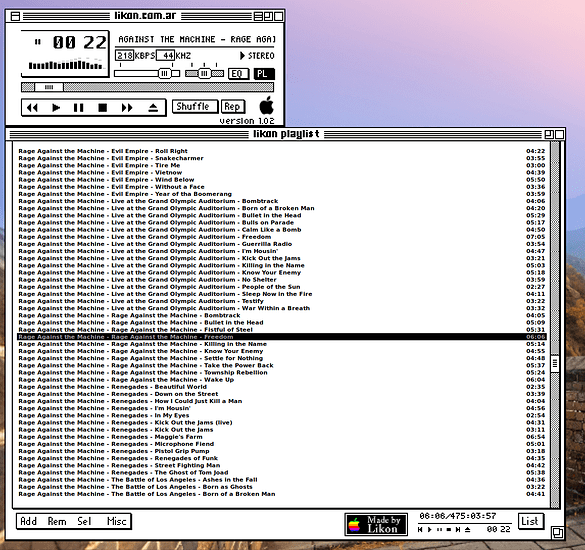 Also supposedly the decoder is “the most audiophile there is”, which I have no idea how anyone determines that…

This was also the exact recommendation to me. But personally done a blinded test and i cant tell the vlc player from foobar player. But like you said, it works and ive let it remained installed back then and it was what ive used before jumping to linux.

We could start a thread on encoders,decoders,human hearing, etc and probably have a thread as large as the lounge within a few days…lol.