Do you have one? What do you use it for?

I got a used IBM x3950 on ebay for cheap. It has 4 dualcore Xeons, 8GB ECC RAM and I don't know what to do with all this processing power. Currently it's running BIND and samba. Thinking of other things I can use it for. Any cool things I can do with it?

Although most of my servers can be seen in my profile. I shall give a quick run down of what they are for.

On the VM machine there is 2 web servers and a Domain Controller and DNS.

2 severs being decommissioned are being replaced by something far more powerful. May also take over duties of game server as well. 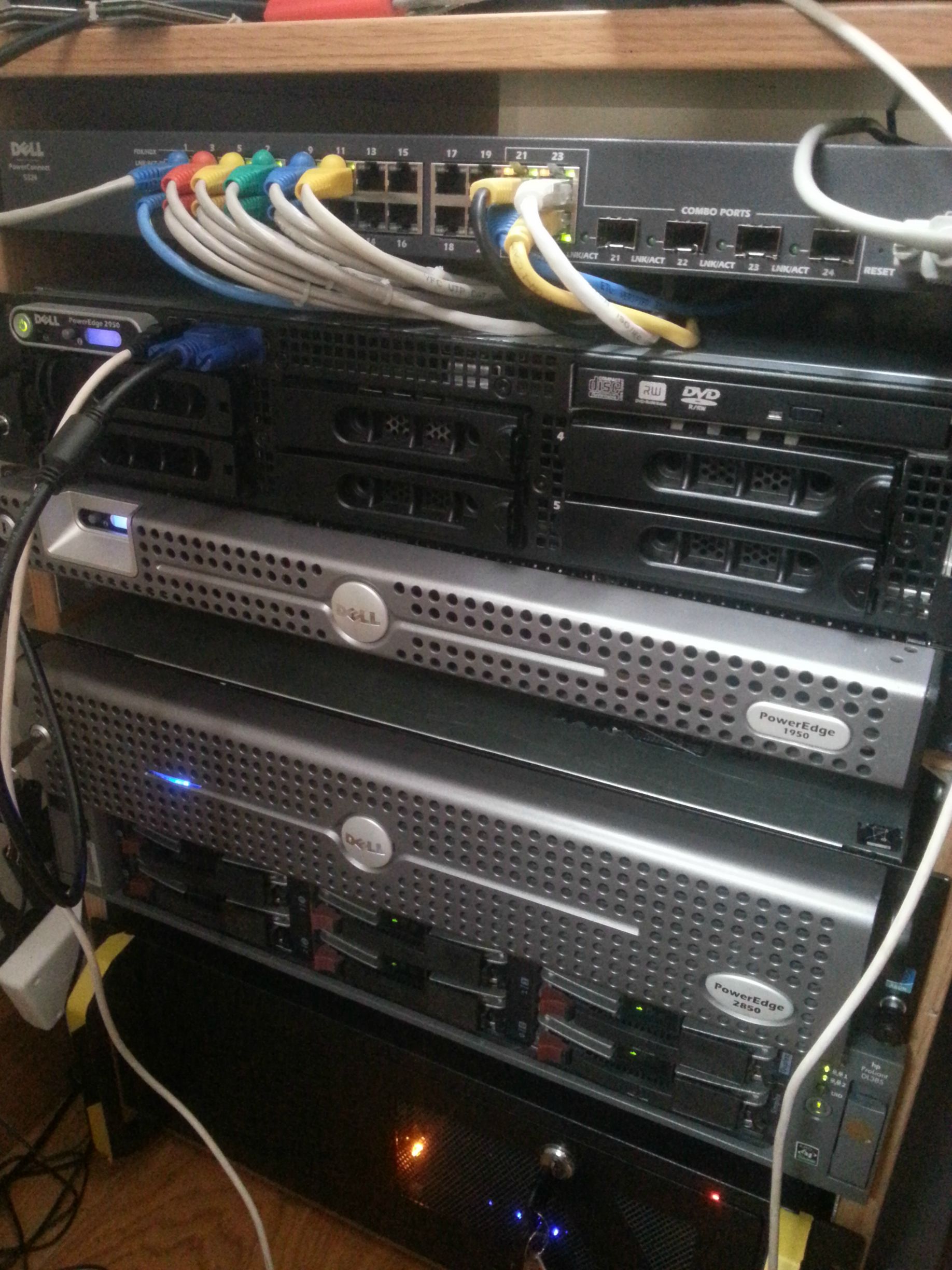 This is the most up-to-date image I have (from 6 months ago). This shows the 2950, 1950, 2850, DL385 and the NAS. The Game server is in an identical case to the NAS and so is the VM server. I would take a new picture of the servers in the 42U rack I own. However I am currently away for the next week or two. (I shall post a pick if I remember) (Also the Pfsense router isn't shown here)

The 2950 used to be a game server, that is why it doesn't have multiple disks. Just two SSDs.

I have a home server which basically manages my entire network.. I use Plex to stream media to all my PCs and mobile devices, its pretty cool - grabs all metadata for movies and tv and music and has a great layout with apps for iOS, android etc. have several samba shares and backup all my devices to it..

I'm not sure, but I think you can run pF Sense in a VM and make an ultimate router (Logan, Wendell and Qain did a video on it a while ago) - which would be pretty cool..

All in a Bitfenix Prodigy (i know, lol - will be upgrading to a Fractal Node 605)

My server seems like nothing compared to yours lol..

I have a home server that I use to run plex and also back up a lot of my data. Sometime I run a minecraft server on it for myself and friends. I am using an old computer case so it is nothing fancy. I also have an old graphics card in there (560ti) that I am using to mine dogecoins. I don't remember every part that I have in it, but it has

Thats about it. For a RAID solution I am using flexraid which is all software based. So far I don't have any complaints with it.

I found an old video of the above setup, just demonstrating how loud it was all in operation. (but no where near full load)

IBM x3550 7978 2x E5420 quadcores and 8gb ddr2. Not doing anything with it atm, Probably going to use it for crosscompiling or set it up and ssh into it when I'm out and about and just work @ home while I'm not at home... That last bit is starting to sound better every time I think about it. Still gonna add 8gb more ram to it though.

I have Dell PE 2850 but currently its off because it produce to much NOISE. :P Hopefully when I change locations I'll set it up eventually. For now I'm using old crap PC as NAS (2x1TB raid1 + 2x1TB raid 1).

My server is sad compared to the other ones,

ATI radeon HD4650 GPU (low end but runs the windows classic style desktop, and command prompt at a solid 60FPS :) (I added it to replace a GTS 250 that was in it previously in order to reduce noise and save a little power)

running windows server for the NAS functions, and 2 virtual machines, 1 for VPN, and another for my minecraft server. Not a high end server by any means, but it can fully saturate a gigabit connection for NAS functions, and handles VPN and the game server with no issue