So it’s time to retire my old storage server, and at a local resale shop I saw and grabbed a “HP ProLiant Microserver Gen8 4LFF Pentium G2020T 2.5GHz 4GB” for relatively cheap. I’m planning a build with truenas, anyone have any experience with this particular little beast?

I looked up the processor on the Ark, and saw that it supports ECC but had to jump on the deal. So, my question is this, stick to the HP or potentially sell it and get something else?

I looked up the processor on the Ark, and saw that it supports ECC but had to jump on the deal. So, my question is this, stick to the HP or potentially sell it and get something else?

If you’re going to keep it you could upgrade the CPU, this one doesn’t support AES-NI and is quite slow, for something like a E3-1230 V2.

Upgrading the RAM would also be a good idea, to something like 16 or 32 Gigabytes. Especially if you’re going to run TrueNAS and ZFS.

The Microservers are great little machines in their formfactor and if you can get upgrades for fairly cheap it’s still worth it to keep one from that generation. But keep in mind that they have their limitations, so if you’re planning to go big with your Homeserver you’ll need something newer or more powerful.

So, decided to keep it. Whoever owned it previously had stickers (removed before I bought) that damaged the front paint a little. So, gave it a slight Star Wars theme. 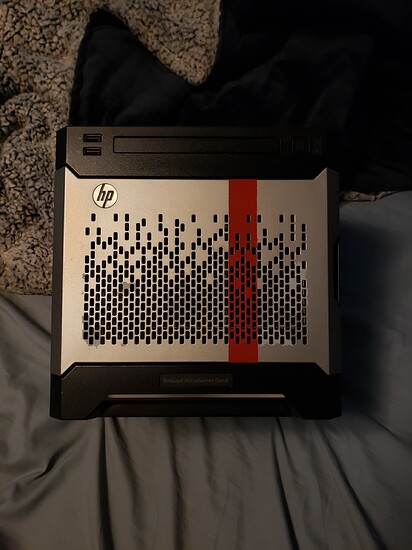 Other than that not much to report right now. 16 gigs of ECC is on the slow boat from China.

Will keep you all posted.

I used to run around 10 ProLiant Microserver Gen8 and 1 Gen10. But I believe they were the Celeron versions and they were upgraded to either 8 or 12 GB of RAM (it wasn’t me who bought and upgraded those monstrosities). They were used as NASes for our hypervisor cluster.

I used CentOS 7 on them. Worked fine. They had md raid on them, I haven’t tried ZFS, but I see no reason for it not to run, as it didn’t have a RAID card.

For home use, it’s more than enough, it should work great.

Edit: and they were very quiet compared to the 2U Intel servers we had.