My first post was about building a new workstation(ECC). I’ve shelved that idea (x570 chipset fan/Thinkpad is fine) and would like to upgrade my server(i7 920,18GB non-ecc,centos6).

I’d like to build a storage server with zfs[no xp].
It would run proxmox[no xp] or centos

It would run a few vm’s:

I’d place it in the utility room (heating, wire cabinet, washer, dryer). I want it as quiet as possible and performance/energy/heat balanced.
I live in Europe (Belgium)

There is someone locally that is selling a server.

Or I could buy one in the US(ebay or theserverstore.com)

All advice is appreciated.

Is this a home server or workstation? You mentioned workstation but then you talk about it in a utility room like a ‘server closet’. Trying to figure out the use case.

Also, do you require IPMI? ECC?

OP says they originally wanted to make a workstation, but that idea was shelved in favour of the home [storage] server.

Because typically dual xeon machines are server oriented and in 2RU rack mount enclosures with many small, high speed, noisy as fuck fans.

However, lets (for the benefit of the argument) say you do find a desktop workstation oriented dual xeon setup… (they do exist…)

… you also likely aren’t really requiring enough active threads (most of your stuff described above will spend most of the time idle) for that workload to really consume the available cores on the dual xeon setup **** , and the threads you are running at any given time will be limited to 2.4 Ghz at lower IPC than Ryzen 3000 which ALSO runs at higher clocks. Ryzen also supports onboard M.2 NVME IO. Which is faster.

Now, i’m not sure what the case/enclosures are you are comparing, but for your use case, ryzen will be smaller, quieter, less power and most likely faster due to the higher IPC and clock speed.

The only caveat being that Ryzen 3000 at this point is still new and may have teething issues. But if you can wait or work around them… all good.

Also consider Ryzen 2000 for the same reasons as above. It will similarly smoke a 2.4 Ghz Xeon thread for thread, and you could get 8 cores 16 threads pretty cheap during the 2000 series inventory run out. I’d wager that per active thread, Ryzen will be 1.5-2x the speed, and as above your active thread count won’t be enough to make the difference for dual xeon. And you won’t have to disable SMT to be secure.

**** just checked and the Xeon you’re talking about is a quad core (E5-2609 v2 as well?) with only 4 threads (i initially thought it was higher core count than that). So you won’t even have a thread advantage with the Xeon (8 threads vs. 12 even on a ryzen 6 core). A ryzen 6 core will murder it, especially after recent spectre/meltdown mitigations are taken into account. Unless you have some very intel friendly workload that doesn’t see much penalty for cross-socket communication…

Also, ryzen will be new hardware. Not some old stuff from 6+ years ago that uses DDR3.

I’m there with @thro

I would likely also go with a simple Ryzen setup.
aside from the above reasons, a Ryzen setup will also be more power efficient as well.
Maybe ditch 3600 for a 3700X, if you want more cores.

Another option that might not be overlooked here, is Threadripper.
With recent price drops on the 2920X 12 core 24T cpu’s, it might also be an interesting option.
Only down side is the power consumption likely.

I mean that’s a pretty nice deal.
Of course memory quad kits will be a little bit more expensive but still.

i’m trying to keep an eye on threadripper pricing and still tempted to get even a first gen.

I spend less and less time gaming these days, and for the stuff i DO mess with (vm lab under linux) even a 1900x would get me 8 ram slots which will enable cheaper 64+ GB of ram than on AM4 (because you could use say, 8x16 GB rather than 4x32 GB needed on AM4 - 32 GB DIMMs are $$ - you’ll get 128 GB cheaper and in more incremental steps if needed)… plus all those lanes for storage controllers, high speed IO, or whatever else i might need. Plus higher maximum RAM capacity down the line… higher thread count down the line, etc.

Anyone who is building a home lab and considering Ryzen 3k should also keep an eye on the TR4 platform for sure.

Yup and also the entry level X399 boards like the Gigabyte X399 Aorus pro,
i currently saw that board for like €220,-.
So in that regards, some of the X399 boards are also come down in price a bit.
And those entry level boards are totally fine for the 180W tdp sku’s.

So yeah if still looking into more pci-e connectivity, for nvme’s and all that.
Then yeah it might still be tempting i guess.
I also checked on Epyc prices, but those are a bit too steap for the 8 core parts.

Thank you for all your feedback.

Tomorrow I’m getting the server (supermicro 846EL, 24bay, 2x Xeon etc.)
I’ll test the noise and power consumption and then I’ll decide if I should upgrade or not.
I will change the fans with noctuas.

Other say the 1TB rule is just for big banks,… not for home use.
In that case I could go with a ryzen build 64GB ECC even for 4612TB=288TB.
Not that I will ever need it. Who knows.

I’d place it in the utility room (heating, wire cabinet, washer, dryer). I want it as quiet as possible and performance/energy/heat balanced.
I live in Europe (Belgium)

There are several reason id just shell out for the newer CPU, but it depends if you really need a state of the art server, i litterally run my home 24/7 server here at home of a A10 8750? i think some wierd id amd apu 8750 or what not.
it runs VM’s, filesharing, and even acts as my bedroom htpc, and i just slapped a be quiet cooler on it so it is deadly silent until i start torturing it.
it shares files just fine, even ZFS, it runs VM’s just fine etc etc.
all with a 95W cpu.
given your sophies choice id go with the VERY much newer AMD cpu, if you got the F U cash to spare, it uses less power then the two 80W cpus, has more threads, and newer interfaces etc etc(call it future proofing).
But ask your self, do you really need it to share some harddrives, maybe run some VM’s?

I’m not sure if 64gb ram is future proof enough. Or could I insert bigger modules than 4*16GB.

I believe AM4 will support 128 GB with 4x32 but right now those DIMMs are very expensive.

I read that you need 1GB of memory for every 1TB of raw zfs.

You don’t and this misinformation NEEDS TO DIE.

If this is the entire reason you’re thinking you need 64+ GB of RAM… you don’t. The reason de-dupe needs so much RAM on ZFS is because it does it LIVE, and the de-duplication table needs to be in RAM for max performance as it is looked up for every block written. If that lookup is not in memory then it has to seek from disk and performance tanks hard. So hard. Which makes sense if you think about what it is trying to do (a hash comparison of data to write via an on disk hash table look up. For every. single. block.).

The rule of thumb is that 1 GB of memory is the size of the deduplication hashes for 1TB of data. Don’t do de-duplication and that requirement goes out the window.

The rule isn’t “for big banks” or anywhere else. It is feature set related. Don’t turn on that feature

That said, performance will improve with more memory due to more memory being available for read cache, but for a home NAS setup you’re likely not hitting the read cache that hard anyway.

And even then; in a home user environment (especially with the amount of storage you’re taking about), you will have enough disk spindles (and not enough simultaneous clients to thrash the disks on random IO so hard) to keep up with the max throughput of your network.

If this is the entire reason you’re thinking you need 64+ GB of RAM… you don’t.
…
That said, performance will improve with more memory due to more memory being available for read cache, but for a home NAS setup you’re likely not hitting the read cache that hard anyway.

It also depends on the type of storage, whether it is live (i.e. likely to be written to) or some of it is purely archival (purely read-only and potentially not that often).

The only exception I can think of is if you are transferring tons of data through multiple high bandwidth connections. But given this is a home server, it’s unlikely in most situations.

The only exception I can think of is if you are transferring tons of data through multiple high bandwidth connections. But given this is a home server, it’s unlikely in most situations.

Yeah, with the additional caveat that multiple users are hitting the cache…

I’m looking to upgrade mine purely based on age, rather than performance requirements.

Thats of course fair enough.
Either way it likely won’t disappoint you.

In terms of memory ddr3 RDIMMS are now so cheap it would be silly not to fill up all the slots with 16gb modules. 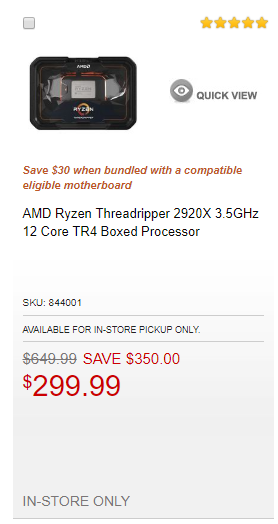 Probably much too late but my 2c: picking Ryzen 3600 means less PCIe slots and much more expensive (and limited slots for) ECC RAM sticks too.
With PCIe lanes limit also means less SAS/SATA ports or on some boards some of them came from chipset instead of CPU, less network expandibility, etc. M.2 restriction probably can be worked around with BIOS update/hack.

Depending how far from the store one is. It’s a bit far for MA to pick up…