HI all,
Just got my 1900x system up and running and noticed that in the Fstream utility that is included with the asrock x399 pro gaming motherboard was showing different temps to afterburner. Fstream would show 90 and msi would show 60.

So this left me wondering, what is correct? running a cpu burner showed the that the system might be running hot due it locking up every now and then however the air coming off of the rad was not too hot.

Anyone have any ideas as to the massive difference in temps?
Most likely going to have a look at the thermal compound.

I guess that Asrock also has a temp monitor in their software suite?

You might check the temps out there and see what they give you.

difference between 60 and 90 is allot for a software readout tool.
i would definitelly double check the mounting of the pump.

You could also use open hardware monitor for temp readouts.

just redid the thermal paste, there was full coverage so I recreated the same pattern that i used again. Just installing the hardware monitor now.

Carnt see the temps shown here? am i just not seeing something? 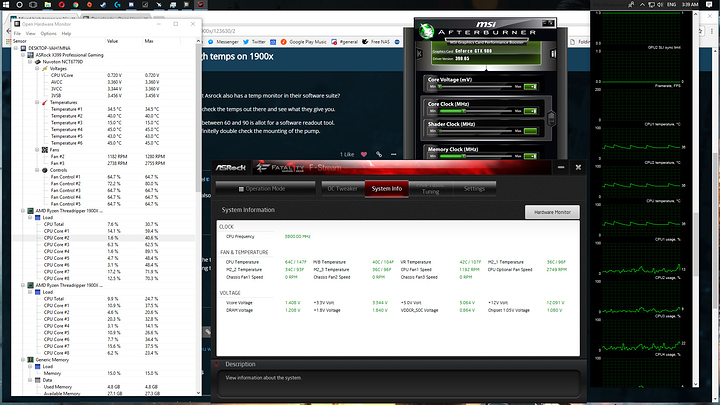 Hmm thats kinda funky, HW monitor should give you a package temp readout on the 1900X.

Personally I use HWiNFO64. Look for Tdie.

ill give that a shot and show the results

Personally I use HWiNFO64. Look for Tdie.

That’s the motherboard section. Look for Tdie, it should be in a different section, right under Tctl. 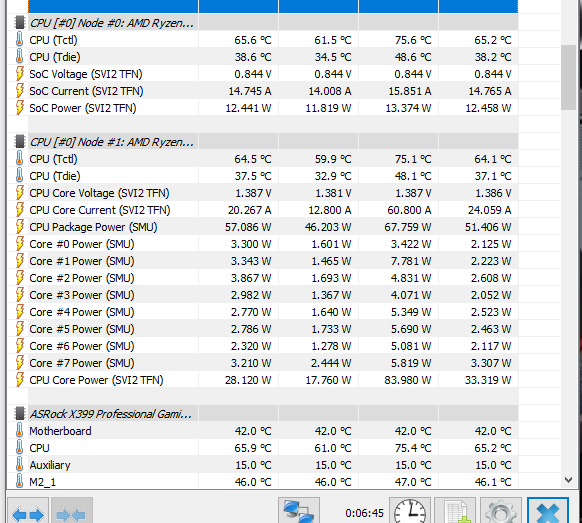 The cooler is an enermax 280mm threadripper edition, the one that has the larger block for tr4 and is mounted correctly.

The “CPU (Tctl)” temperature is the raw readout from the internal CPU sensor. According to AMD, for the X-series Ryzen CPUs, one needs to subtract 20 C to get the true temperature. So this is the “CPU (Tdie)” value. But please note, that this readout might differ based on some system-specific settings like Sense MI Skew.
Then under the motherboard sensor you should see a CPU temperature, that should reflect the internal CPU value. The “CPU (socket)” value is the external temperature of the CPU measured by a diode close to the socket.
There’s a good (but long) thread at OCN regarding Ryzen and ASUS CROSSHAIR VI HERO, which I recommend as it contains all possible details about this system: http://www.overclock.net/t/1624603/rog-c...ing-thread

so that would be seen as an ok temp? This is also a different board than what in the post, Asrock fatality x399 pro gaming

Is this under load? I’m not familiar personally with TR, and very light on info about the 1900X in particular. 1.387v would be middling-high for a Ryzen 7 but obviously this is a different creature.

there was a lot open and the clocks were changing a lot when i was looking at them, windows doing its thing. now its sitting around 1.3125v

Also did a bios update but that didnt affect it

I found that the Asus board I have with a 1700X runs a performance enhancement “feature” on by default that caused a lot of high voltage spikes, I wonder if the Asrock board here is doing something similar.

At any rate the variance in temperatures is weird but given other reviews of TR temperatures nothing seems to be out of the realm of reality. Except that previous 90° reading. That seems out of place for sure.

i was playing around with an oc prior to starting the thread but that has since been removed, i think that it might have still been applied when the screen shot was taken, however it is still the same temps at stock.