i'm doing my first build on FM2+ motheroard using kaveri. For some reason I cannot gt the 212 evo on my CPU, the screws on the metal brackets just will not reach the standoffs. I don't know what to do, I'm gong crazy, plzzzz help

The springs on the screws are really stiff. Are you pushing them down hard enough? 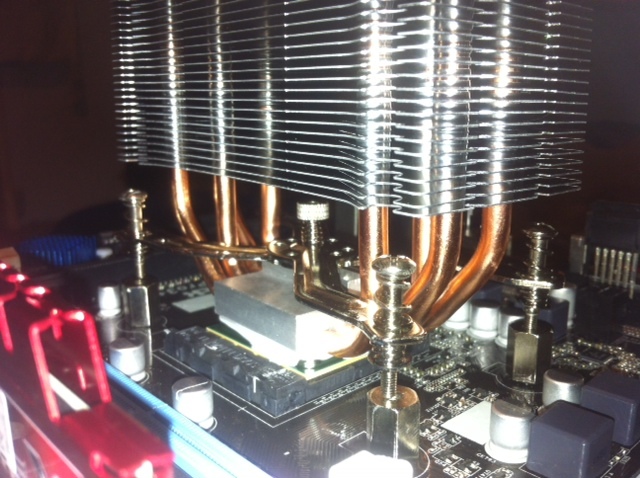 Would need a picture here, but I fit it onto my FM2 board no issues, are you sure the backplate is on correctly? You also may need to rotate the arm that holds it in place

Also is that just the lighting? Or is there ton of paste spilling onto the socket?

Doesn't the hyper 212 have notches to line up the bracket?

notches? I don't think so. WHat should i clean off my paste with?

The highlighted in red is what he's referring to

preferably 99% isopropyl alcohol, but even like 70% would be fine

and ya, the screws can move on the cooler, so make sure they're in the right spot

I usually start with a piece of paper towel, then an alcohol pad, and finish with a lint-free cloth.

no, yeah, they're in the right spot, they just wouldnt reach the "C" screw things. I got them on now though, though i had to apply a bit of forcw with my screwdriver

The springs on the cooler are really stiff the first time you install it, that's normal. Don't worry about it, your cpu is fine.

did you use the correct mounting hardware?

Your meant to push a fair bit down with the hyper 212 evo to get contact with the screws to the mounting holes. Don't worry about squishing your CPU. Just make sure that they line up correctly first before screwing.

You might wanna mount the "X" holding bracket a few times to get use to the way it goes in without the heatsink on. Then when you put the heatsink on, just lay it flat asap, By then you'll have your screw distance set and don't have to mess with jerking them around while screwing them down. IF they play with you it helps to have another person to get a socket or wrench and wrangle it down fromt he other side of the motherboard or pliers to hold those hex bolts in place.