Getting much lower scores than expected in CrystalDiskMark for DIMM.2 RAID 0 of two 960 pros 512. I was expecting north of 6000 as others have gotten. 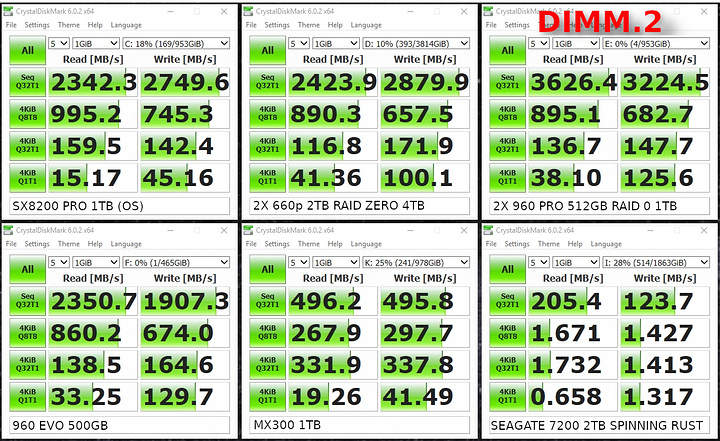 Are you using all the other PCI-E lanes?

Well yes and no. Populated yes, using no.

The DIMM.2 have two x4 PCIe lanes of their own. Having the rest of the PCIe lanes populated should not make a difference should it?

@wendell got any ideas here?

Population does make a difference AFAIK. You should be able to change the chipset lanesplit somewhere in the BIOS settings. But I’m not sure if you’re allowed more than 4x lanes. You might just be using 2x lanes or even less. This is a pretty well documented problem for my motherboard the Crosshair VII which is like the smaller version of your board.

I should not need chipset lane split.

As Threadripper has 64 PCIe lanes, none of the M.2 slots, including the DIMM.2, nor x16 or x8 slots, go through the chipset. All go direct to CPU.

I REMEMBER NOW!! The problem is there’s a special NVMe chipset driver software that needs to be installed in Windows to get the fullspeed. Also you may need to download and update the firmware for the SSDs themselves. If you rewatch Wendell’s Raid 0 config for the same motherboard he sort of glosses over that point. I need to go rewatch the video and find the timestamp.

I Have AMD’s latest chipset driver.

And the firmware for the SSDs is also latest version? I remember reading on some other forums that some guy was using Samsung SSDs and they were performing terribly until he updated their firmware.

I cannot say for sure, but I think that Samsung Magician said everything was up to date before RAID set up. Magician no longer works due to AMD RAID driver.

AFAIK there’s also a separate raid driver to the chipset driver. I think that was also a point of contention in Wendell’s video. I’d start from step 0 with no raid, make sure SSDs have latest firmware. Then install chipset + RAID drivers, then setup raid? I don’t have this motherboard I’m just quoting Wendell’s video.

This is a new RAID set up. The latest AMD chipset driver and raid drivers were used.

Possible firmware but very doubtful it is out of date. However the 660p RAID is doing fine so possible.

I will have to try later tonight as I will likely have to delete all arrays to do that.

So if you overclock it can introduce pcie instability especially on Asus boards. Load optimized defaults then retest your raid array?

I helped Eber do a soft raid with Samsung and he got the Samsung nvme driver which was better than windows also.

Don’t I need to use the AMD driver for NVMe RAID?

Had to do it twice as I forgot the Asus auto overclock. And all the other RAID settings.

You were right, it is the OC.

Maybe I will try it in the PCIe x8 slot with OC and see if it does better cause I would rather have the OC. 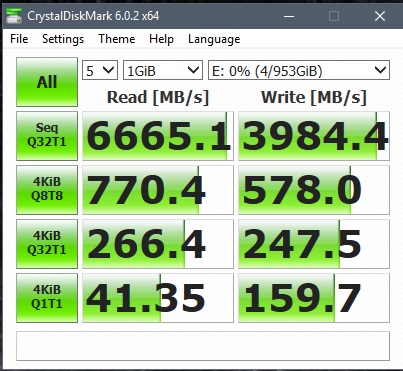 Gotta go. I will try a few different things tonight and see what gives.

Forcing CPU PCIe config to run Gen 3 helped ever so slightly. Lowered clocks to 3.8 also tried higher OC at 4.0 and no better.

Only stock clocks seems to allow proper M.2 RAID speeds… Moving the array to a different PCIe slot did nothing.

As the OC is more important to me, I will have to live with the 4000 seq speeds.

When it comes to rebuilding the arrays I have I may try Windows instead of AMD RAID as OS is not in an array.

2nd gen TR seems much better in this respect where weird things happen like this. Also, idk why, but asus boards are particularly sensitive to this kind of stuff on 1st gen TR.

I may only be able to go down with ram speeds. Higher speeds have not been stable. As I commonly use all ram, I really need the stability.

I have no friends that go this high in hardware.

I have PCIe aperture setting, but do not know what it does.