Been making quite a few GPU passthrough related topics as of late, hope that's okay!

So everything is now almost working perfectly. Been playing a few Overwatch games and all seems to be good. But got a few things I could use some pointers on touching up.

1: I have a SSD that is dedicated to just games. I have it setup through Samba, but Blizzard App doesn't like it, and I then realized that the speed will be limited to network speeds. How can I physically mount this hard drive from my Linux host to the Windows guest?

2: Overall, Synergy seems good, except in games. With Overwatch, the camera goes nuts, and will switch back to my Linux host in the middle of a game. I presume this is unavoidable?

Would love to hear anything else you guys did to polish your KVM setups. Thanks.

Ola, probably shouldn't talk because my virtual machine is currently dead due to some file system BS (which is unrelated) but I may be able to shed some light on physical disk pass-through as I also wanted to do the same thing with mine.

I followed this guide here:
http://ronaldevers.nl/2012/10/14/adding-a-physical-disk-kvm-libvirt.html

In a nutshell, open up your domain's xml config ;

And then add your disk using the source disk as whatever your disk is in the /dev/disk/by-id folder of your host machine. I'll post mine below as an example 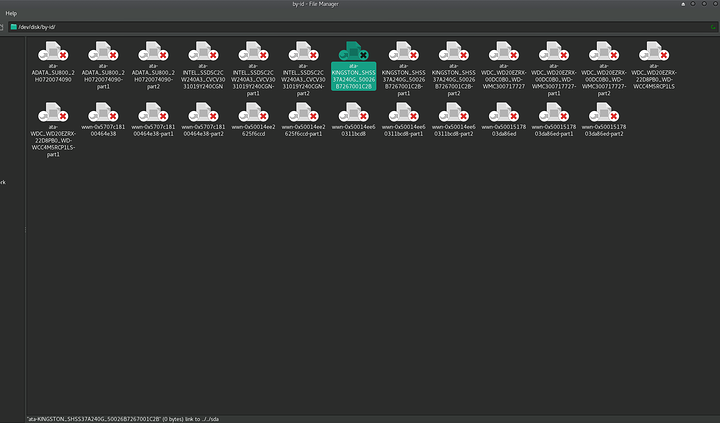 Selection_002.png1783x1049 52 KB
You can see down the bottom that Thunar says its 'sda' which is the entire disk, the other Kingston drives listed (part 1, part 2 etc) in the folder point to specific partitions on the disk, you want to ideally point to an entire disk so select the drive without and numbered suffix's

If I wanted to add the Kingston SSD for example I would use:

I don't know what your exact setup is like for how you operate your system but I'm using virt-manager to handle most of the stuff because I'm too scared to launch a virt machine from a script. As for synergty in windows (while mine worked) I also had issues within games but am now just running a PS2 keyboard for my host machine and USB mouse and passing through another keyboard and mouse via USB.

Thanks for the tips.

Your solution with the HDD is what I eventually found in the Red Hat documentation. The other stuff wasn't good, though what you have seems legit.

But hey, makes sense that Red Hat has good documentation on it, it's their software after all.

I'm also just sticking with two sets of keyboard/mice for now, I'm not switching back and forth between the OS's for that to become a hassle.

For sure loving it so far.

My setup is only using a single monitor, everything I do whilst gaming such as listening to podcasts or browsing the web is done on the linux host, albeit light activity I still find it REALLY ANNOYING to switch from HDMI for my guest machine to DVI for my host (as my montior takes ages to switch inputs).

At the point now where I'm buying a second monitor which is expensive but will pay dividends for my sanity and tolerance. I could do everything I wanted in windows no problem but windows gives me trust issues, I would only use it to store and play games now.

I also much prefer using Arch as it feels natural and fast to use compared to windows, and thats not even because its my host. Windows still feels as slow as it does when I dual booted. Linux is a much nicer overall 'feel' to it

I think rather than using emulator software it is just better to have an entire set of peripherals entirely for use within the virtual machine.

The reason it'll be hard for me to switch to a dual-monitor setup, is because my monitor is a 40 inch 4k AMH monitor. I have a 22-inch 1080p, but I don't know if that will 'flow' well, if that makes sense.

And yeah man, Linux is really where it's at. Just got a few games and needing Office 2016 for my business college courses.