my home server is limited by its case (the Rosewill RSV-L4000). i have 4U case right now that works fine, but the problem is that i have 2 triple wide PCie devices that obstruct all other PCI slots. i am looking for a way to fix this that still allows the full use of my PCI devices and is still powered by the server’s own single ATX/PS2 power supply.

ive seen 6U mining cases like the Nanoxia Hydra 3 that come very close to what i need. the problem with that case is that there is no EATX motherboard support and that there is no way to connect anything (like a display) to the PCIe devices. i also have no use for more than one power supply.

ive been researching for several days and can find no product that solves my problem. 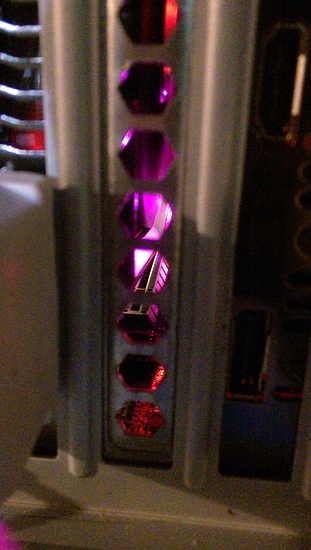 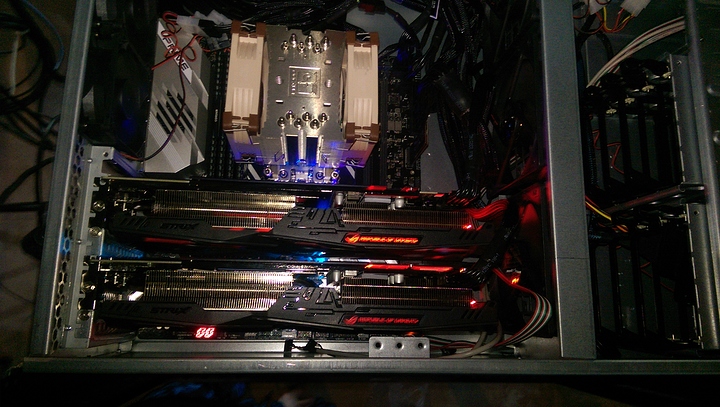 Are you specifically looking for something that will let you mount the GPUs connected with ribbon cables?

i would think that would be the only way to mount the GPUs away from the board itself. I’m open to other methods though, as long as it retains the full functionality of my PCIe x16 slots.

The best that I can find is a case that would let you mount a single GPU vertically, but not both.

Caselabs is out of business. In case you didn’t know.

That was the joke.

Are you looking for the front GPU mounts that are on the hydra 3?

The hydra 3 looks like one of the rosewill 4000 variants that they made for gpu mining. You might be able to pick up one of those real cheap and just swap / mod parts into your rig. It looks like you are not using the front hard drive bays? That would make the swapping easier.

if i did that, how would i connect displays to my graphic cards?
also, i dont want to remove my case’s input fans.

Without moving your graphics cards, at least some place other than they are now, it seems that there is no way to reclaim the other PCIE slots. As pointed out above there are risers and extenders, but if you still need the GPUs mounted in the back slots, That might not work. How about modding a 2u case to fit over the top of your 4u case and running the pcie extenders down into the 4u?

I had been looking for similar cases, such as you are looking for, but in the year of looking found nothing. For my use case, I just ended up getting two 4U cases and will be running the tubes and cables I need out the back and into the back of the other one, long enough that I can pull one case out on the sliding rails and not get caught up.

Will this 5U case do? 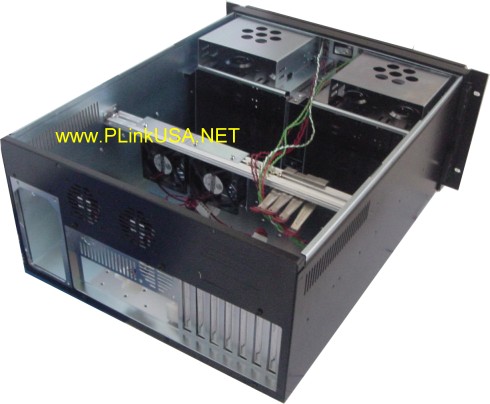 I’m getting this myself since my 4U Rosewill server case won’t contain the Dark Rock air cooler I bought for my Threadripper 2950x. It sticks up 1/4" almost above the top of the case. Which is too bad because I really like the Rosewill case.
I’m not really happy with those tiny mid case fans on the cross brace. But, it will take my air cooler, which works great by the way. After taking into account the offset the CPU runs at a steady 23C under load, even playing Arma 3 at top settings or running Houdini.

I’m building my first computer and it’s a daunting prospect since I’ve only messed around with some cheap old HP desktop clients previously. My build is loosely based on Wendell’s advice though maybe I’ve made some mistakes. ASROCK Fatal1ty X399 Professional Gaming AMD Threadripper 2950X Radeon VII G. Skill Flare X 2933MHz 4 x 16GB Corsair H100i Platinum AIO Samsung 970 EVO Plus NVME M.2, 1TB EVGA SuperNOVA 1200 P2, 80+ Platinum 1200W Rosewill RSV-L4000 4U Rackmount Server Case 8 internal bays 7 fans. LG 32UD59-B 32" 4K UHD LED I’m currently waiting for the delivery of a 16GB Kingston USB for installations and Thermal Grizzly Kryonaut Thermal Grease Paste. I’m almost certain I’ll be buying a Wacom Cintiq Pro (non touch screen) https://www.amazon.ca/Wacom-Cintiq-Pro-Pen-DTK2420K0/dp/B07BDDYK99 I’m a bit concerned that the M2 Samsung EVO 970 isn’t listed in support for that mobo but then the mobo came out in 2017 and that M2 came out just in January of 2019. Also I’m deeply intrigued by Wendell talking about installing Linux Mint on it then running VMWare 15 and it’s pass through capabilities to run Windows 10 Pro or Windows 10 Workstation. I’ll really need to know it I can install drivers for that Cintiq and do a pass through to the USB or USB-C it’s plugged into. Wendell claims that this setup is so efficient I’d only lose one CPU cycle for a virtual machine… [imgpsh_fullsize_anim%20(1)] So this thread will be all the problems a more or less novice will have in trying to assemble this expensive stuff. And I really need it bad. I am a 3d Graphics junky, I desperately need my fix. PROBLEM 1. Matching the System Panel plugs of that Rosewill server case to the System Panel header of my ASRock Fatal1ty Pro Gaming x399 mobo. Now on the Reset wires, I know Green is Ground (-) and Black is power (+) but the Power wires, white and red… [20190319_080204] [Inked20190319_082709_LI] [System%20Panel%20Header] yes I know, i’m a hopeless tard…but what exactly goes …

I’ve got an L4500 with potentially a similar issue. Right now I’ve got two double-slot cards in it, and this covers the other two PCI-e slots on the board. In the future I’d like to have four cards in this case.

The only way I’ve figured out how to get around this is water cooling. Put a full coverage waterblock on each card, which would convert it to single slot.

Only a couple downsides to this, though. Expense is one, obviously. But also space. There might be enough space for a 360mm radiator, even in your shorter L4000. I was trying to figure out how to cool four cards and two processors in my L4500, which is longer.

Then again, I don’t know how willing you are to have water close to your storage drives. My home server is in another L4500, which will live higher up in the rack while my lab/VM machine would be at the bottom.

But anyway, that’s my thought. Water cool the suckers. I’m thinking you are going to have a hard time finding such a specific chassis that will accommodate the cards you have. It’ll probably free up other slots on your board, too.

doesnt look like it would work for me. there still doesnt appear to be room for more than 2 3-slot-wide PCIe devices.

liquid cooling is not an option for my setup.

maybe there’s a way i can use pcie risers and 8pin extenders to put my graphic cards in another case entirely?
ive been looking for an appropriate PCIe riser, but i cannot find one that is bent in a way that runs it out the back of the case.