Help Me Diagnose Power Fluctuation Issue Without Burning My House Down

So I just got my second RX 480 today (yay me) and as per usual launched a million different games just to see what's what make sure everything's good... turns out, I got problems. I loaded up my copy of modded skyrim which to my knowlege is the most power draw intensive game I own. After about 2 minutes in game my case lighting started flickering, did this for about 30 seconds? thought it was just something wrong with the lighting then BAM hard crash. At that point I knew what was going on so i went into Wattman and dropped the power target for both cards 20% each which puts their combined tdp at where my 980ti would have been back when i had one. Everything ran fine.
At first I thought it was my power supply but how could it be?
RX 480 stock = 160w i7 4790k @ 4.5 with 1.265v would be 150w (at absolute maximum) and i've got a d5 and an ass load of fans which probably add up to about 50w at most.

The combination of the fact that a safety cutoff wasn't hit (hard crash did not shut pc off) and that i'm 130w below the main rails max if everything was tapped out which i doubt because processor utilization wasn't that high.. Am I correct to think it's my wall socket that's the issue? should I test under full load on another socket or not even bother and get a new psu first and assume that this one is faulty? I'm interested to hear what you all think and why.

EDIT: fine print of my psu states 850w can be maintained up to an hour

Do you have access to a KillAwatt or similar ? 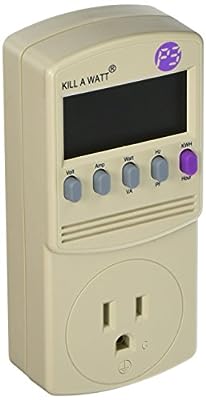 Empowers You to Save Hundreds on Electric Bills Electricity bills are rising. Now you can cut down on costs and find out what appliances are actually worth keeping plugged in. Simply connect these app ...

Because it will be interesting to see what the total system draw is and the incoming voltage.

Or you can use a multi-meter and measure the 12v Rail, see how far that drops when a load is placed on it.
I use the molex connectors and connect to the 12 volt and the ground closest to the 5v rail

Pretty sure my father has a millimeter out in the garage how would I go about measuring it? Plug one probe into the right most connection as per the image, and the other in the one of the center pins.
The grounds are common-ed together so it doesn't matter.

if you are reading 5v or around that just moved the outer edge probe to the other other edge pin.

But this might be caused by the incoming mains but best you not go stilling probes into electrical sockets.

Would i have to put the PSU under load to see fluctuation or does the multimeter pick that up on its own? not familiar with using a multimeter so sorry if that's a silly question.

you will need to see it under load.

I was measuring a PSU here. See below but the multimedia is just out of site on the floor.
I stuck the probes into a Molex connector and proceed to run some benchmarks. 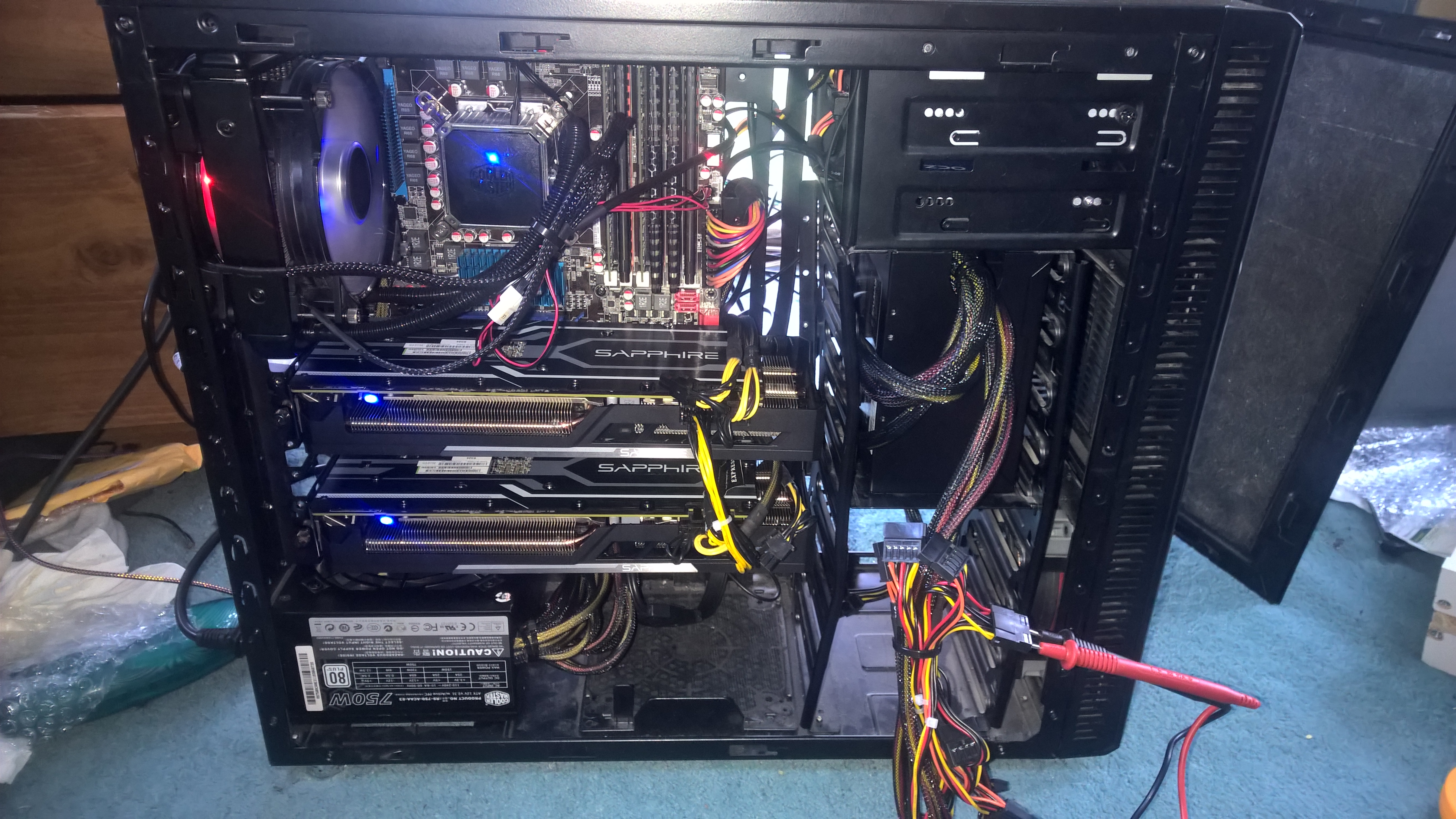 I'll have to do it tomorrow, I think i'll start with the settings that i know won't crash my computer and slowly work my way up till i start seeing weird shit.. then try the same on another circuit in my house.

Yeah that seems like power supply to me. If the breaker didnt flip then its something with the PC. 650w is pretty close to the edge of the line for a dual GPU setup. And 650w is nothing for a wall outlet. you would need like 1200w plus to really get things to start messing with the wall stuff. Why they even make anything over 1400w is beyond me but ok.

I think the air conditioning is on the same circuit though and my house is from the 50's couldn't that potentially put it over?
I think it's worth noting there is an outlet in my room that i had to stop plugging my pc into because it won't boot up on it.

If it was an issue of too much draw on the circuit - the whole circuit would go down, not just your PC. However while you are testing your PSU have a check of the connections the lead into your plug, if some of the insulation has started to wear not only could you be getting problems but you have a serious fire hazard on your hands

no way. you would need to pull like 1500w from the wall to do that. Unless your house is wired in the worse possible way as in all the rooms are in parallel and not series it wouldnt happen. You can basically draw 12amps from a wall no problem anything after that and youre pushing your luck pretty hard. youre microwave I bet is 1000watts and that Im pretty sure runs fine with the AC running as well. Looking at TDP for a card is almost useless. TDP means thermal design power. Its actually a measure of how inefficient the card is. basiclly this card will put out 160w of heat. that doesnt mean the card wont draw more power. in some cases a rx 480 will draw up to 300 watts. if that happens for a few seconds youre going to trip the fail safe in the PSU and it will shut off.

if that happens for a few seconds youre going to trip the fail safe in the PSU and it will shut off.

Unless if something is really out of whack (which is possible, not gonna rule it out entirely) power draw should be within spec of this PSU, now whether or not the PSU is handling what it's rated at is another story.

Nope thats expected long term average. As in under heavy load it should be around here. But that doesnt mean the card wont spike up in power. People dont understand power much. A card will draw as much power as it can. Which means it can spike. You get a few well placed 300watt spikes and you will trip something. You need to remeber that voltage is pretty much fixed. if you have 160w on a 12v you have 13.33amps. Thats a lot. double that and you have around a 300watt spike.

again we're back to nothing was tripped, crash was without loss of power.

your cards crashed. they couldnt suck enough power and they stalled.Thus the PSU tripped and cut the power or the cards shut off themselves bc they got stuck expecting power when there was none.

a psu shut off would shut off the entire system. there's only 1 12v rail

no it wouldnt. everything is solid state now. it isnt like a breaker or a fuse going off. they have mirco controllers in there to say hey too much cut back.

Maybe you are right then. Still going to verify with a mukltimeter tomorrow on another circuit because as i said there is a plug on this circuit that won't even turn my pc on but it'll charge my batteries n shit. I appologize about arguing about the PSU it's always been my understanding it causes a whole system shut off when overdrawn.

I mean by all means check the outlet. Im just assuming its fine. But you should always do the easy stuff first. no need to start probing when you have a bad wire in the wall.

Turns out my initial hunch was correct... great so unless if I have an outlet in my room that's on a different circuit I need an electrician. Either that or I need to ghetto route an extension cord to the basement through the ducting or something

Just bumped both cards to +20% by slowly creeping it up. (120w over what was stable on the other outlet) It's the outlet for sure.