I am trying to install Linux Mint 14 Nadia 64bit (i figured the age of the OS would help being an older system since I’ve not much luck with Mint 18 either) onto an Acer Aspire 5560 (BIOS version is 1.15). I am using the live ISO which was written to USB using Rufus, Fat32 and MBR Bios & UEFI. https://www.linuxmint.com/edition.php?id=120

I have tried Ubuntu, Mint (14 and 18), Debian yielding same results.

I also have tried this without avail: https://community.linuxmint.com/tutorial/view/842 within the USB method.

Has anybody experienced something similar or might have some input to ease this installation? (I may eventually install using another PC then moving the hard drive over as a last resort, but ideally I’d love to figure this out and avoid that sort of thing).

1: Your laptop isn’t so old that a newer OS wont work on it. In fact you will probably have better luck with a newer distro.

2: I believe that if you use a GUID partition map (instead of MBR) that you will probably have better luck. I am not 100% sure on this one though.

3: It sounds like you have an issue with video display and not the distro itself. This sounds like a job for the good old nomodeset command.

When you get to grub press the tab button and type nomodeset and press enter.

Look at this page here for a visual representation of what you are supposed to do. Once you get the laptop booted up and install the OS, you can install and configure your drivers so that you wont have to do this again.

2: I believe that if you use a GUID partition map (instead of MBR) that you will probably have better luck. I am not 100% sure on this one though.

I agree. I’ve had issues being able to UEFI boot from Windows 7 installer USBs when choosing “MBR for BIOS UEFI CSM” option.

Though with that being said, I personally haven’t seen Linux distributions not being able to have UEFI booting from MBR USBs, I’ve only seen that issue for Windows.

If it’s just a black courser on the screen after the grub menu try a different usb stick. Could try for an EFI format instead of MBR on GPT.

Could try for an EFI format instead of MBR on GPT.

How would/could that be done though? Isn’t that a partition name, not a format?

Thanks for everyone’s responses!

I just tried a GPT partition table, and am using Mint 18.3 this time, but it appears to be the same issue as far as I can tell.

There is no ‘tab’ key command in grub that I can see (mint perhaps doesn’t have the proper version? maybe it’s rufus that needs to be updated (using 2.9)? or the ISO specifically I’m using from mint not proper(https://linuxmint.com/edition.php?id=246)?) 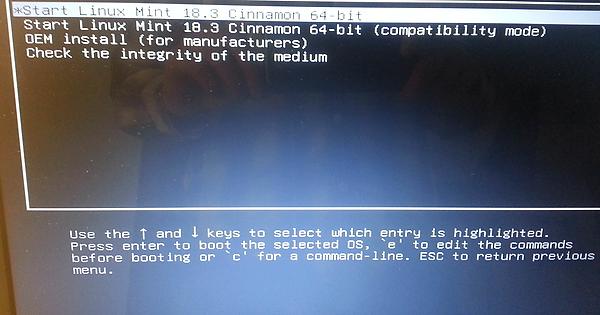 And i put ‘nomodeset’ after “splash” (not sure if it’s in the right spot): 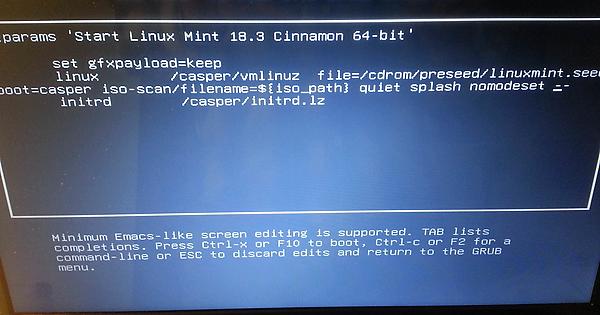 Edit: oh and the computer DOES boot into debain which is currently on the hard drive, so the video card does seem to ‘work’ at least? Certainly could be an issue I suppose but it’s not like the card is complete toast?

For shits and giggles try loading up arch and see what happens. It may not have support for whatever graphics is running on that machine. I’d be amazed if that was a problem with linux in general, so you might just want to look at ubuntu mate (does mint run mate?) and the kernel may just be really old on the install disk.

Or you could try a minimal/cli installer (I assume mint has that?) and updating the kernel and graphics drivers afterward.

Happened on multiple distro installs with my machine for vega since they were all running a kernel way older than 4.15 for sure.

Mint does have a MATE option, I tried Nadia (mint 14) with MATE in my initial post, and it had the same problem. I have not yet tried 18.3 MATE however, which I can.

I can also give Arch a whirl, is the goal to see if it’ll boot into a non-desktop environment OS? Once I’m in Arch (provided it boots ok) I wouldn’t know where to go from there.

I’ll try these after the DVD/SD card tests with Mint 18.3 Cinnamon.

That usually yield the best results from what I’ve seen. (I mean I’m not a fan of it, but you get the idea. )

Arch seems to be the same thing, this is all via the USB:

If you have a USB 2 stick try it. Had issues every week trying to install pfsense and proxmox, swapped over to my usb 2 sticks and they worked without issue.

Either that or install on a HDD using another PC then swap the drive.

So I installed Mint onto the hard drive in another laptop, swapped it out and it worked magically (well I need to get this laptops drivers installed but this isn’t too big of a problem). If I get my hands on USB2 and non-HC SD card will let you know if it boots successfully with those options.

P.S. I had to prep the USB using MBR for BIOS & UEFI with rufus for the other laptop (Lenovo ThinkPad T400) as GPT wouldn’t boot the USB. Perhaps a BIOS setting but I didn’t poke too much at that