So basically I'm taking the HTML and CSS course on www.codeacademy.com

I am picking things up rather quickly I'd say until this "list within lists". It says "Instructions
Go nuts with your lists within lists! The only requirement is that you have at least one ordered list(

*well guys.... I haven't had my coffee yet and I just solved it. Atleast it's letting me proceed. Now I really will go get some coffee. I am a complete newb to this but this stuff is fascinating! lol that's funny that I made a post on this asking for help and at the last moment I got it.. wow..

Nice work figuring it out. If you have any further HTML/CSS questions definitely don't hesitate to ask. I would've responded sooner but I didn't see this until now :D

for further messing with lists, you can use CSS to remove or change the default list icon markers too:

Hey if you get this message I would appreciate some help here again. I am stuck on CSS module.

1.Add an to your HTML document. Its src attribute can point anywhere! (Check the Hint if you're stuck or need a picture.) So I added a pic

Hmm. I'm not exactly sure that I am understanding the task. It looks like perhaps you are missing a word at the start of the following quote (where I added _______ ) . . .

1.Add an ________ to your HTML document. Its src attribute can point anywhere! (Check the Hint if you're stuck or need a picture.)

What kind of object are you supposed to add to the HTML document?

Also, make sure you are using the right formatting in your CSS:

If the goal is to add an image to your HTML document with height of 100px, width of 300px that has a 1px solid border with color of #4682b4 then this CSS should work fine.

It bugs me that there is no tab on your height width and border....damn ocd

This is what I have currently but it's not letting me proceed I will post a pic in a second, thanks =) 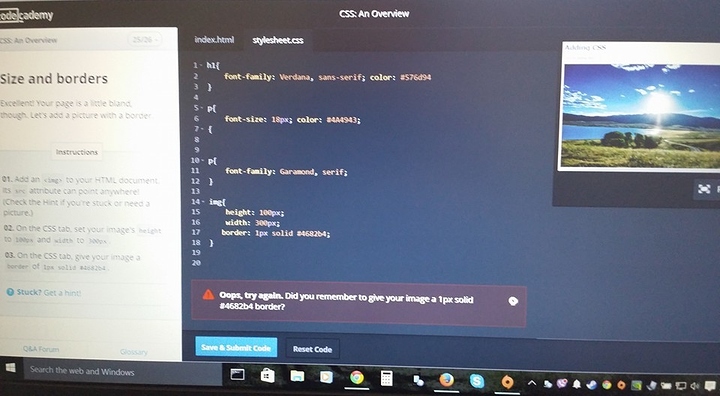 I know this doesn't look good but I am still learning, this is my first course.

Haha. Yeah I include tabs in my actual code. I'm really obsessive about indentation as well :)

Hmm. Looks fine other than indentation. Make sure to indent each CSS style statement within the brackets. It makes things easier to read when you create long CSS files. I prefer to use the tab key to add an indent, but some folks like to indent with a certain amount of spaces, etc.

Also, you can combine the statements for your paragraphs into one section . . .

Could you give us the HTML you are using for adding in the image?

Edit: ooh also make sure to add a semi-colon after your color statement for h1 . . .

Always make sure to include semi-colons after every style statement. It also makes it easier to read if you put each style statement on a separate line as I did above.

maybe they want the -bottom -top and -right?

Ok thank you. I thought you could combine them somehow. 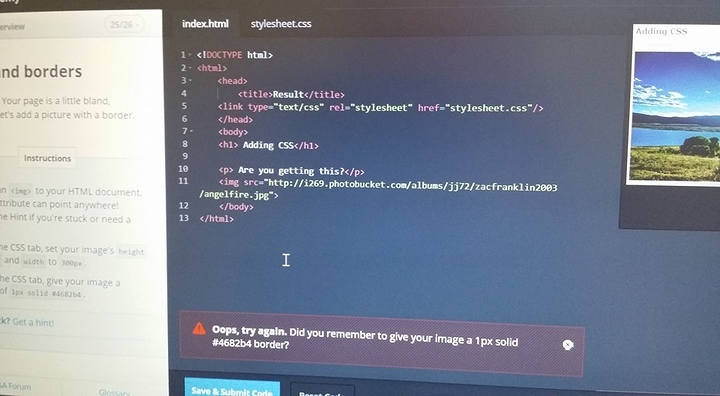 hmmm I will keep trying.. 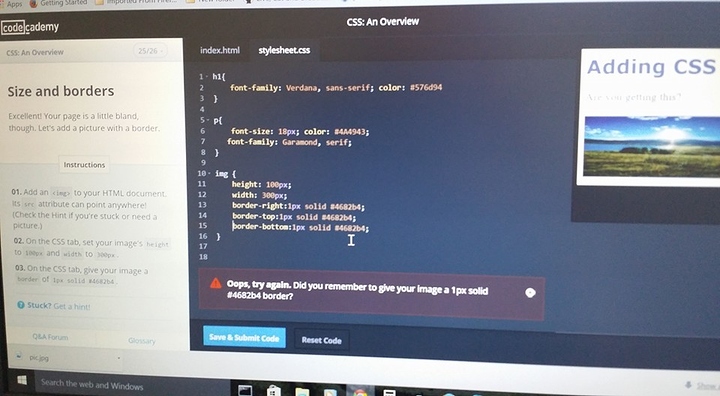 Ok I made some changes but still? weird..

The border changed so that's good 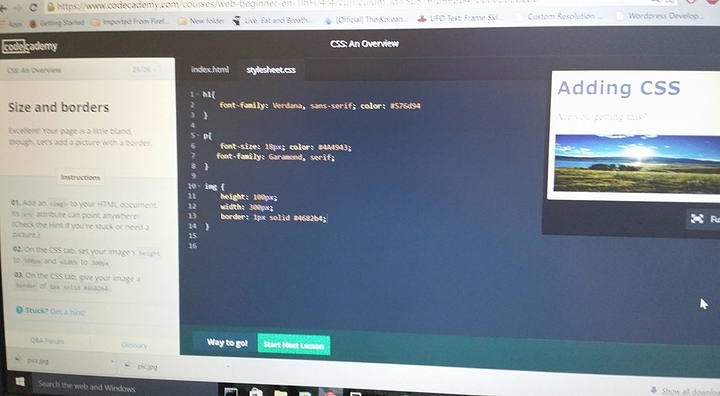 Well a few mins later and its a go??? That's strange.. not sure if it's a bug lol but thanks =D

ooo ok well thank you for helping anyways =) I am sure I'll be back lol.... *cheers get some coffee!

The format for the img selector in your most recent screenshot looks good. I would add the space between the selector id and the opening bracket for "h1" and "p" and then make sure to put the semi-colon after the color statement on "h1" like we mentioned.

ok will do. Yeah I am noticing some glitches so I am not sure either... I'm about 55% through the html and css course on here.. I think after this I will study through mlwebco

Hey, if you ever need more specific help, point me to the section of the tutorial in codecademy. That way I might better understand your situation. I've taken that same course in the past. I also really like web programming. For future reference, I've done some JavaScript too.

you had border only on 3 sides of image, thats why it didnt passed :)

tip: if you want border only on 3 sides, you can do:
border: 1px solid black;
border-bottom: 0;

Well to be honest there is a solution to every of the exercises found on google. But that is not really necessary since you have all the info you need so far from your class. If you want to be a programmer (if we want to consider webdev programming) try not getting spoonfed too much and stress your own brain.
You would learn so much more if you try to solve without asking on forums. Also after this basic introduction start of with some books and get used to this kind of learning, since books are really the best recourse for studying. Giving you the tools and not tempting you to scroll to the solution...

I know webdev is mostly just copy and paste but you should not aim for becoming a codemonkey.

Probably gonna get lots of hate but I had too be written.

I appreciate the constructive criticism, I was stuck for over a week on one problem.