What about an SSD drive? And I can get a good mouse and keyboard after I order this. And is there really a speed difference in getting a micro ATX motherboard to just a ATX motherboard id like a bigger case for breathing room and expansion later

I cleared my SSD just to install MGSV onto it, I have to wait 9 hours for it to download but by god is it going to open up as fast as I can get it to.

What about an 4690k? Seems like the go to choice for most builds around my price?

Is this in USD? Rupees? Great Brrrritish pounds? Not everyone here is American.
Also, are you wanting to do any streaming, video editing, recording etc? If so there's an xeon that might be a better choice than a 4690k. Making partpicker lists now...
Are you wanting to overclock?

There's still plenty of questions you've left unanswered in the "READ BEFORE YOU POST" topic in the build-a-pc section that I linked days ago (scroll up).

Yea, increase it a dollar and then we might have to make another topic though. /s

Yes it's 900 now i guess I'm sorry I just started to post on this forum and I'm not knowledgable about the policy's about the postings. But I just need some help to get my PC parts down and order it. I do apologize

Here is what I would do with that money. Solid build all around. Really like that psu, gpu, cpu, ram, and ssd.
http://pcpartpicker.com/p/9sgpwP

A mess of a topic at this point...

Regardless, the build I posted is solid. I don't see much more reason to keep going with it. Otherwise, I would suggest starting a new thread considering that he has changed the price and stated two different prices currently (900 and 950). But everyone was a newbie at some point.

I'd change the MSI card to a sapphire one on the grounds that it's got a better cooler, get a H97 board, drop the RAM to 8GB because you're not going to cap that out unless you're leaving a million applications running in the background or are one of those idiotic tab hoarders that like to cache half the internet in their system memory every time they launch their browser of choice (and if you go down that route, RAM's cheap as chips if you want more anyway). Also, the HDD's more expensive than a 7200RPM version. Wtf? And there's a nice PSU that's on a good deal atm, a 650W fully modular 80+ Bronze rosewill for $50. Oh, and the case, I swapped it for a silencio 352 because it's only a touch more and it's got pretty much everything you could want out of a mATX case at that price point, front panel USB3, sound proofing, dust filters on all intakes (besides one at the top which can be an intake or an exhaust, and has a cover if you want to use it as neither...).

...and added a 120mm AIO because there was nothing else I could think of spending the $35 I had left on.

The Sapphire has a nice cooler, but no back plate and the cooler is loud.

Locked i5 doesn't need an after market cooler at all. Can attest from experience.

the cooler is loud.

Really? Any reviews that say this? From what I've heard it's a pretty quiet card.

Locked i5 doesn't need an after market cooler at all.

...and added a 120mm AIO because there was nothing else I could think of spending the $35 I had left on. Sapphire's new Nitro line, is designed for the average gamer. Featuring high performance, and high quality components while keeping the price down.

And I was saying, you may as well just not spend the money at that point. That is extra money in your pocket.

meanwhile kitguru say it's not intrusive, in a way more realistic situation:

We measure from a distance of around 1 meter from the closed chassis and 4 foot from the ground to mirror a real world situation.

...and the temps speak for themselves. If it's inside a sound proofed case like the silencio 352 it'd be fine unless you've got the ears of a freakin' dog. 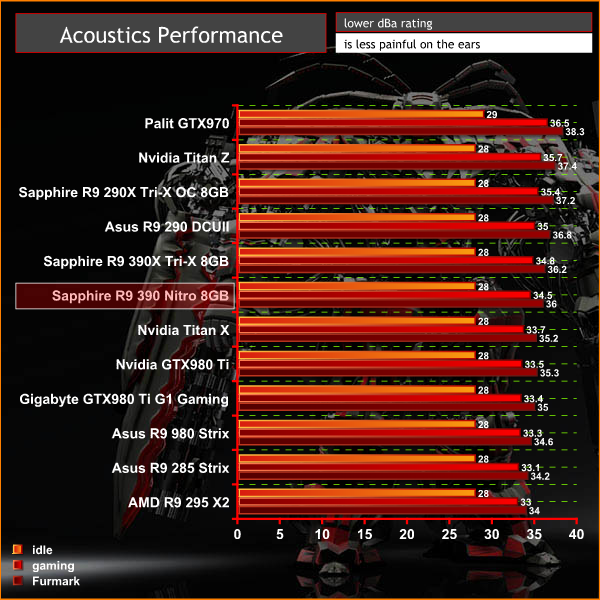 Today we look at a sub £300 graphics card from AMD partner Sapphire. The R9 390 Nitro is a model from Sapphire’s new range and features Black Diamond Chokes and a large triple fan cooler to k…

I always assumed that those ridiculous temps came with the trade off of higher noise levels. Either way, the 390 is the card to go with. I personally like backplates for longevity, but Sapphire builds solid cards (no doubt about that). So at this point, it is semantics.

I always assumed that those ridiculous temps came with the trade off of higher noise levels.

Well, yeah, but in the right case it's no problem, and it's not like sapphire out of all manufacturers are going to release a GPU with a custom cooler that sounds like a hairdryer.