Hello, I am looking for some help to diagnose (and hopefully fix) issues with both the free and non-free AMD drivers for the Advanced Micro Devices, Inc. [AMD/ATI] RV730/M96-XT [Mobility Radeon HD 4670], in a late 2009 iMac; tested on KDE Neon and Debian stretch.
Free driver:
The biggest issue is no backlight control so 'xset dpms force off' clears the screen buffer but the backlight remains on. The iMac also won't resume after sleep, when attempting to resume the display remains blank (both backlight and actual display (holding torch to it)) but I am able to ssh into the machine. xbacklight returns 'no outputs have backlight property' and there are no devices in /sys/class/backlight/
Non-free driver:
Now my initial response to the issues with the free driver were to install firmware-linux-nonfree (inclues firmware-amd-graphics), however after restarting X11 the output is discoloured and split into 4 of the same screen (as seen below). Imagine is of the plasma desktop. 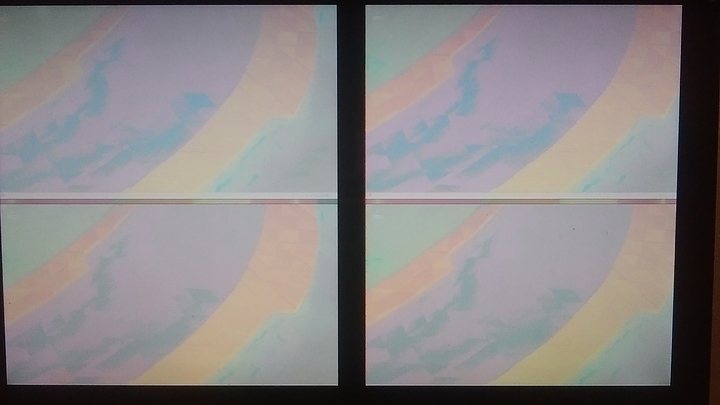 I would be very greatful if someone could point me towards an issue on a bugtracker, help diagnose the issue or provide some sneaky kernel parameters or something to get the backlight control working. Thanks
Additional info: hibernation works; kernel 4.9.0-1-amd64;
There are two relevant lines in journalctl: "kernel: pci 0000:03:00.0: System wakeup disabled by ACPI" & "[drm:radeon_pci_probe [radeon]] ERROR radeon kernel modesetting for R600 or later requires firmware-amd-graphics."

go to the Video section about 1/3 page down.

Also, it looks like you would need to be on Debian Testing; if you are still using Debian.

Thanks, exactly the type of thing I'm looking for. With radeon.modeset=0 set I get "[drm:radeon_init [radeon]] ERROR No UMS support in radeon module!" on boot. This turns up some relevant search results which I'll investigate later tonight.
Yes the system is running debian testing (which is the same as stretch atm). I'll take a further look down the no UMS support rabbit hole and get back to you

awesome, glad I could help :)