Help for someone in poor health buying a pre-built PC

I’m currently looking to get some money from an inheritance and will be looking to get a newer PC. I’m wondering if buying a pre-built computer from some of these boutique online companies would be worth it? I mean I love buying parts and building them myself, but due to medical issues my hand’s aren’t very steady these days.

So I was wondering if any of you had any experience with these kinds of companies, and their customer service? Their warranties? Quality of parts? That kind of thing.

Also if any of them build AMD machines? I’d kinda like to stay team Red, because I’ve had nothing but good luck with them running Linux on my current machine. So if they offered that, that would be great, but if not, it’s not a deal breaker by any means.

Any help is DEEPLY appreciated.

Hey @Smerrills I’ve worked for AVADirect.com custom computers for 2 years now went from level 1 to assistant supervisor in that time and now handle procedure So I pretty well know the ins and outs at this point. Our guys do pretty good work I don’t stand for crap going out our door We’re always happy to build it like it’s our own.

We offer several tiers of warranty, I believe they’re 1 year, 3 year, and 5 year the price depends on how high end the system is. I’m admittedly not a sales person so I don’t have those details memorized.

We’ll build it with whatever parts you want. AMD? sure. You want a rubber duck mounted inside? we can make it happen.

As far as linux support we offer pre installation but that is it we don’t do any sort of set up or drivers or garuntee distribution compatibility so that part is on you. We will however test the system with windows make sure it’s all good to go and nothing is catching on fire before putting linux on it.

Here’s a fancy system i built last year for example we like to make em perty. 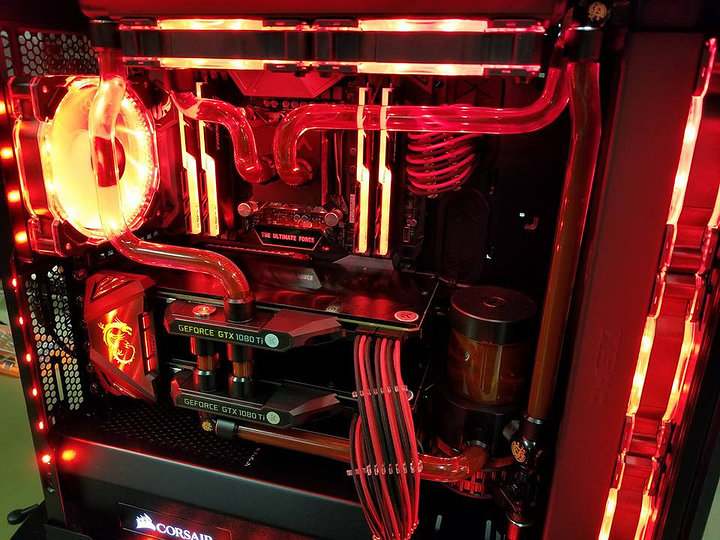 That is very pretty. Though, I really don’t need all the flashy. I also don’t think water cooling will be a good fit for me unless it’s an all in one. I don’t have the dexterity to get down and change fluids or clean blocks. I hope that’s understandable.

I like minimalism when it comes to a computer’s looks. Unless it looks retro. Like computers from the 70’s and 80’s. Those were my jam back in the day. Otherwise, I like just plain looking cases. No RGB. I currently can’t stand RGB. Too flashy for me.

And it would need Harddrive space. I have nearly 90 percent of my media on a 1TB WD 5400 RPM drive at the moment. So I’m gonna be looking at more storage. I don’t need very good graphics at the moment either. I have an XFX RX 470 at the moment that I’m liking, but my current CPU is seriously holding it back.

That and I’m going to be doing more media influenced work because I’m going to be doing video editing for a local news station. But I need the hardware for it. That’s mainly why I’m looking for something beefier than I’m running. Don’t get me wrong. This Phenom II X6 1055 T has been a workhorse and has carried me thus far, but it’s time to upgrade I think.

So when I finally get my money, I will be looking for a company, and will definitely keep you in mind.

But I would like to pick your brain about your competition if I can. Have you or has ANYONE had any experience with the other companies around?

Like Puget, or Origin, or any of those companies? How’s the quality of their work, customer service? Etc…

Fair enough. We can build whatever you want was just showing you an example of quality so expect that even in a simple setup.

The guys at Xidax are pretty chill, cyberpower is pretty Garbo. Other than that dont have too much experience with our competitors.

If you have more questions I’m happy to help.

I’m actually curious as to the opinion of @wendell if he’d be so kind as to lend his opinions? Or any ideas he’d be willing to give me on what I should do in this situation?

Linux is so easy to migrate hardware so take advantage of that.

I was friends with a guy who had health problems but did really well with being able to do some maintenance machines like the node 304 itx system.

Anything bigger was too big to manage.

Different Video Editing Software and codecs even will have a preference towards different specs. CIneform codec is GPU decoding capable where H.264 is normally CPU or Dedicated Decoder dependent, most graphics cards and CPU’s have h.264 decoders built into them because of this. but its this type of understanding/thinking you will want to do before you spec out a system.

I’m actually going go be editing with several codecs and video formats. So I’m trying to build an all around machine that can handle all of it in general. I’ll have a budget of about 2200 bucks plus shipping.

if thats your budget the key things to look at is a 4-8 core machine with hyperthreding/SMT , 32 gigs of ram and then if it broadcast TV it will most likely be 1080 for the next year or two so disk speed is important but not paramount. so you don’t need to worry about having massive NVME Drives or anything like that. If you are doing 4k video editing you will want the largest NVME storage you can get for your footage and it should be on a separate drive from your apps. If you are using a windows based pro software such as Premier or Resolve having as beefy a graphics card as you can afford is going to help in playback and in most but not all codec encoding.

With Graphics cards though go onto the editing software forums specifically and see what tests and performance results people are talking about as different software will favor different cards in different ways. For example DaVinci Resolve does better with a AMD RX 480 than any of the 1060’s and puts the Vega cards at identical points to the 1070ti and 1080. with the 1070 only being slightly better than a 480 which is not what you would expect if you looked at gaming results.

I know resolve works better with AMD stuff. That’s what I am using now. It works so well with my GTX 470, which was the card the guy who hired me, bought me.

Fortunately, I’m getting my work done, but I don’t like how long it’s taking me to turn around projects. I’m well within my timeframes, but I’d like to be a bit more efficient. And i’m noticing that when I do render video, my computer is completely useless. Used to be I could at least watch a youtube video while i did my work. But lately, it’s impossible till i’m done rendering.

But I’m hoping with this money, that I’ll be able to buy something worth the money. Which is why I was hoping people had suggestions on which pre-built companies to go to. Or had any experience with any of them.

Still willing to hear any advice people can give. Thank you very much.

you made a good choice asking here as the guys and gals can be more of a help to you
buying a stock computer (or a casper) (run of the mill set up for most basic tasks) from a big box store you never know what your getting.
all too often Ive seen people either purchase woefully under powered systems and blame the software, or purchase a overpowered system and not utilise its full potential.
for example purchasing a media production class machine and just playing solitaire on it.
Ive also had good products from newegg

SMerrill: you sound like you know what you want. Go to a local shop and just spec out your machine. This case, that board etc. Let them put it together. And ask their advice. You will want a good air cooling solution, not water. You’re productivity based so AMD is your better bang for the buck. You have a good budget so it shouldn’t be too hard to get something that will last you a while.

BTW don’t forget the s/w side of things. You might hold back on spending everything on hardware just in case of having to upgrade.

I second the AVA route. They won’t put junk parts in unlike other prebuilt setups. You can spec a machine exactly how you want on their site.

@Dimwit, I can’t drive atm. so that is a problem. And there are no local shops around me. I’m smack dab in the middle of nowhere. hence why I was asking.